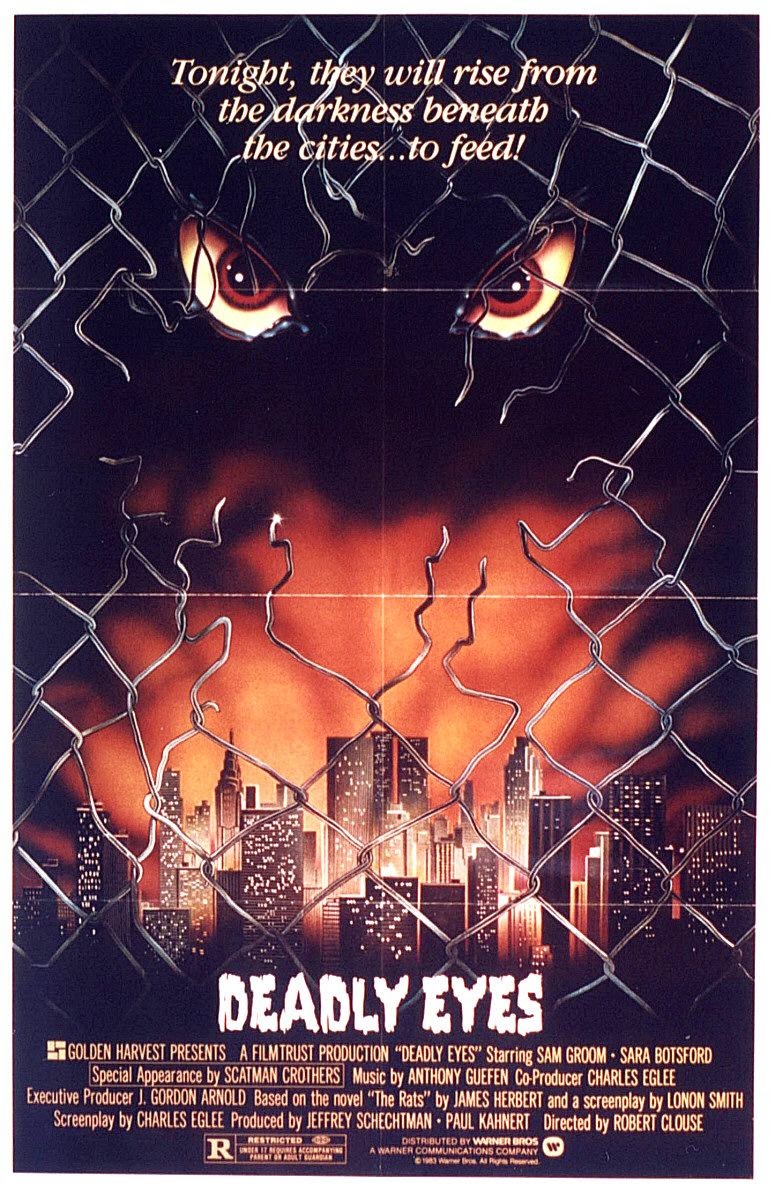 Before torture porn and before the graphic nastiness of Bret Easton Ellis and Matthew Stokoe, there was James Herbert, a pulp horror author renowned for his flimsy narratives with even flimsier characters who died in nasty, sloppy ways. Kim Newman once traced the etymology of the term “nasties”, as in Video Nasties, back to reviews of Herbert’s early novels and the novels of other pulp writers like Guy N. Smith. Like the films branded Video Nasties, Herbert’s early work was only notable for its graphic nature. Characters didn’t simply die. They died horribly and their deaths were presented in true eww gross fashion. They were the literary equivalent of Rotten.com.

So when Robert Clouse adapted Herbert’s surprisingly popular novel Rats into DEADLY EYES, people probably expected something confrontational and disgusting. I can imagine their disappointment. DEADLY EYES (which is still called RATS in the credits) is no more nasty than your average PG-13 horror film. Its over-complicated story concerns a high school gym teacher and single father named Paul. Paul falls in love with a city health inspector named Kelly. He’s also being pursued by a hot-to-trot cheerleader named Trudy, played with irresistible coquettish charm by the lovely Lisa Langlois. Meanwhile, a horde of rats, pumped up to the size of puppies by industrial steroids, are attacking people left and right, devouring a small child, a bum and Scatman Crothers in short order. In an obvious nod to THE BLOB, the rats invade a movie theater, chowing down on patrons, before invading the subway tunnels, threatening the lives of the city mayor and a group of political supporters. Unfortunately, Kelly and Paul’s young son are aboard that subway train so Paul, gun in hand, descends into the tunnels to rescue them.

Now it’s important to point out that the film spends infinitely more time on Paul’s sex life than it does on massive killer rats. That might sound like a massive downer (and it is) but the rats are really nothing special. They’re ridiculous looking. Apparently, in the years since THE KILLER SHREWS, no one thought of any better way to create giant rodents (and yes, I know shrews are not rodents) than draping bad costumes over tiny dogs. They’re just terrible looking things and every time they “attack”, the film descends quickly into unintentional comedy. The close-ups of rats biting legs, hands, arms and necks are done using full sized puppet heads, so poorly made that they distort weirdly every time the person operating the puppet opens the mouth. The ultra violence of the novel is reduced to puppets clamped down on limbs while Crayola blood pours from inside the puppet head. This is not scary, folks. This is shit. And it’s played straight as an arrow, a fact that only compounds the unintentional hilarity.

I never thought I’d say it, but I would actually recommend watching GRAVEYARD SHIFT, Ralph Singleton’s adaptation of the Stephen King short story (which seems like a nod to Herbert’s novel), if you need a giant rat fix. Singleton’s film isn’t much better but at least it operates as a horror film. DEADLY EYES, thanks to a real lack of focus, feels more like a light drama peppered with a few rat attacks. I enjoyed some of the performances (you really can’t go wrong with Lisa Langlois and Scatman Crothers) and the film looks decent enough, but everything that made the source novel so much fun to read is missing.
Posted by David Grant at 11:17:00 PM
Email ThisBlogThis!Share to TwitterShare to FacebookShare to Pinterest
Labels: 31 Days of Horror, Deadly Eyes, Rats