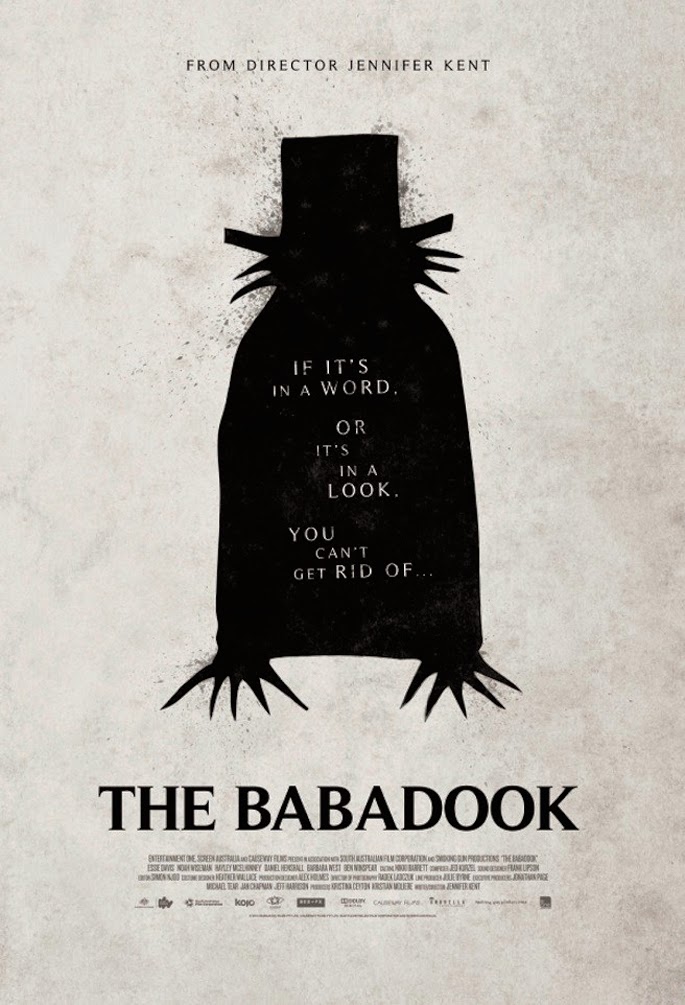 This is the kind of horror movie we need more of.

THE BABADOOK is a film about death. Now that isn’t terribly uncommon. Most horror films deal with death – usually the horribly violent variety – in one way or another, but few manage to treat the topic with as much ingenuity as Jennifer Kent’s brilliantly measured debut. It conjures up a suffocating world built on the foundations of grief and then unleashes into that world a horrifying specter - the titular Babadook - that serves as a perfect visual and narrative metaphor for death, the unnerving reality of it, the terrible emptiness caused by it and the personal destruction it leaves in its wake.

Amelia, widowed on the day her only child Samuel was born, lives a less than wonderful life. Seven year old Samuel is a clingy, attention whoring nightmare of a child, prone to building crude weaponry and alienating his peers. Amelia’s job in a nursing home is an increasing burden and her sister is quickly distancing herself from Amelia and Samuel. One night, Samuel asks his mother to read him a story from his collection of children’s books. Already obsessively frightened of monsters, the story his mother reads him, a grim little story called Mister Babadook, drives his obsession up to a new level. Frightened that the Babadook, a boogeyman of sorts, will invade his home, killing him and his mother, Samuel descends deeper into paranoia and Amelia, pushed to her breaking point by the endless stress of single motherhood and the suffocating grief of losing her husband, finds herself slipping into an ever-more dangerous state of mind. Soon enough, strange events begin occurring. She finds broken glass in her food, a hole in her kitchen wall begins spewing forth cockroaches and the house, empty and quiet, begins to creak and crawl with inhuman sounds.

THE BABADOOK is not a haunted house story, even if it shares many of the same audio/visual tropes like creaking floorboards, yawning black masses of shadows that may hide hideous shapes and objects that move with no explanation. It is a more a movie about haunted lives. For Amelia, Samuel is a constant reminder of the loss of her husband. So conflated are the two that she cannot even bring herself to celebrate her son's birthday on the actual day of his birth. It is a subtle punishment, forcing her son to forgo his own birthday as some kind of recompense for his father's death. For Samuel, his childhood is one constantly under threat of being taken away from him. He is afraid of "monsters", imagined threats against his family, and losing his mother. Her emotional separation from him has reduced Samuel to a child that doesn't just want his mother's love and attention but needs his mother's love and attention, and that does little but compound the tension between them and heighten their separation.

The Babadook, with its demands to be "let in", is used as a metaphor for Amelia's unresolved guilt and grief. At certain points in the film, it takes the form of Amelia's dead husband and even lurks in the basement, the place where Amelia keeps all of her husband's possessions. There is a tinge of both survivor's guilt and postpartum depression in Amelia. In traditional horror film form, Amelia's avoidance of acceptance, her unwillingness or inability to take the steps necessary to resolve her internal conflicts, have seemingly given birth to a horrific monster. It's telling that she initially believes the monster only exists in her son's mind. She takes no responsibility for his behavior. She simply medicates him. And it's no surprise that the medication does not bring resolution. Like A NIGHTMARE ON ELM STREET, a movie that clearly had some influence on Kent, the horror was birthed in the past and will continue to live in the present until it is dealt with. There's no running from it. When confronted about dealing with the death of her husband, Amelia simply states "I have moved on. I don't mention him. I don't talk about him". That, like the buried secret of the Elm Street parents, is what gives the monster it's strength.

For a horror film to be truly effective it must be able to bridge the gap between the screen and the viewer. It must envelope its audience and in doing so transform the passive experience of spectatorship into something much more active. The best horror films do this. Watching THE BABADOOK, I felt like a participant in the world of the film. Every temper tantrum, every cruel word, every single banal moment of stifling normalcy… I shared it with Amelia. I felt the crushing weight of her burden. So when the film shifted into supernatural horror territory, I felt incredibly uneasy. I was already invested so heavily in the film. No lie, there are moments in THE BABADOOK that absolutely terrified me. And that is no small feat. I have become so damn immune to the normal horror shocks that I forgot what it was like to feel that twinge of painful fear run through my body, and while THE BABADOOK does eventually dip its toes into some pretty familiar waters during the final half hour, it is still an undeniably skilled, impeccably acted horror film, one worthy of all the accolades it has been receiving.

Posted by David Grant at 3:36:00 AM No comments:
Email ThisBlogThis!Share to TwitterShare to FacebookShare to Pinterest
Labels: The Babadook 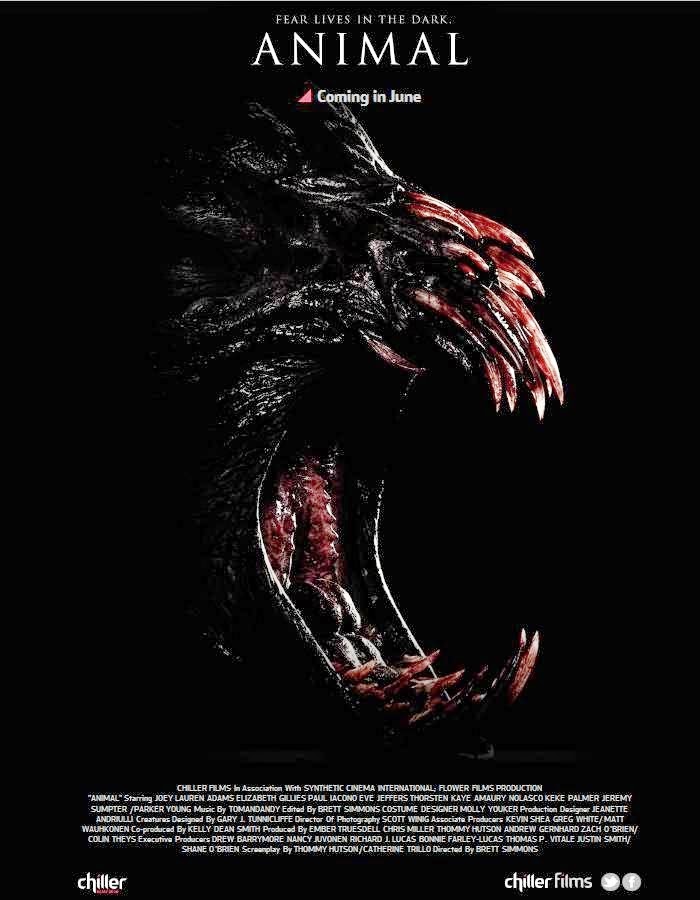 WARNING: THE FOLLOWING CONTAINS RAGE AND GRAPHIC DEPICTIONS OF A SHITTY MOVIE

Here’s ANIMAL, a movie about a couple of man-sized turkey monsters that can manage to take down fully grown, beefy men but can’t seem to move a small wooden dresser barricading the doorway to a broken down, rotted and secluded cabin. Hiding inside said cabin are seven characters who, I suppose, if you mashed them all together would have at least one half of a fully formed personality. The reason they’re all in the cabin is simple. Five friends – hunky Matt, his African American outdoorsy girlfriend Alissa, her white step brother Jeff, their shrieking stereotyped gay friend Sean and doe-eyed, supple breasted Mandy – are out for a hike when they come under attack from the titular animal. After Jeff is chewed up and spit out, the four remaining idiots find refuge in that dilapidated cabin with Vicky, her husband Carl and a raving sociopath named Douglas, all previous victims of a monster – I’m sorry, an “animal” – attack.

All of that happens within the first thirty minutes and thank fucking god for that. Up until that point, the entire film was nothing more than five preppy assholes bitching about everything, arguing constantly with one another about blah blah blah. You would think the film would kick into high gear at that point, right? Wrong. Once the characters reach the cabin, the arguing subsides for a little bit, but it’s replaced with endless scenes of people sitting in rooms, wandering through rooms, sitting on the floor, standing in the corner and basically doing anything but trying to escape. Every once and awhile, the monster – I mean, the “animal” – comes snooping around, occasionally shoving a claw or two through a slightly opened doorway or through one of the innumerable holes in the wall.

This is one of those movies that makes you feel like an astrophysicist. Every single decision these people make is excruciatingly stupid. We know the monster hates fire (because all monsters hate fire) so why doesn’t anyone think to make a single torch? Even better, why not carry the damn baseball bat or fireplace poker with you while you’re wandering in the basement or heading out into the woods? If you had a choice between carrying a flashlight in two hands or carrying a flashlight AND a baseball bat, which would you choose?

The entire film (which had 15 producers and two writers, by the way) is filled with individual moments of idiocy so severe you would probably be doing it a favor by sticking it in a burlap sack and drowning it in a river. I can swallow much of the nonsense the horror genre throws at me but ANIMAL pushed me to my absolute limit. It’s like every bad idea the genre ever entertained rolled into one. Near the end of the film, Mandy grabs weeping, shell shocked Allisa’s arm, screams “we got to move! Now!” and then proceeds to drag her through the woods. Literally ten feet later, Mandy trips and falls. When Allisa tries to help her up, Mandy starts crying and says “I can’t, I can’t”. LITERALLY TEN FEET LATER. That’s how utterly bullshit this film is. It cannot even maintain a single character’s motivations for five seconds. It’s that bad.
Posted by David Grant at 11:50:00 PM No comments:
Email ThisBlogThis!Share to TwitterShare to FacebookShare to Pinterest
Labels: Animal, Shitty Movie
Newer Posts Older Posts Home
Subscribe to: Posts (Atom)