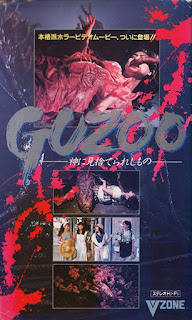 The titular monstrosity at the heart of GUZOO: THE THING FORSAKEN BY GOD – PART 1 is a primordial, amorphous blob of tentacles and teeth capable of adopting the physical appearance of any organism it comes across. In other words, it’s The Thing of JOHN CARPENTER’S THE THING. But unlike THAT Thing, this Thing never adopts the appearance of anything. It just lounges around the basement of a hot springs resort in some scenic corner of Japan, waiting for people to munch on.

Thankfully, it won’t have to wait much longer as there just so happens to be a quartet of bubbly teen girls on their way to the resort right now.

At least I think it’s a resort. It has unoccupied rooms like a resort. It has a swimming pool like a resort. There’s even a manager/chef named Tomoko. But something doesn’t quite add up. One of the teen girls, Minako, is the daughter of a professor who happens to work at the building. The manager/chef is his right hand woman, an archeologist who is all too aware that there is a monstrosity lurking in the basement. They're even carrying out tests on the creature.

So why exactly are you taking in guests when there’s a bloodthirsty beast downstairs? And what kind of hot springs resort doubles as a science lab? Why are archeologists studying a biological organism and why is it a better idea to keep it behind a single wooden door than, I don't know, in some kind of actual containment facility? So many questions...

Minako has brought along some friends. There’s pushover Yuka, nosy ‘sleuth’ Kazuko and pouty Mayumi. Kazuko is the first to catch whiff of something suspicious. She wanders downstairs only to be told off by Tomoko. That area is off limits. Later, Kazuko spies her carrying a basket full of rotting meat into the basement. While the girls are out, Tomoko smashes the mirrors in the makeup compacts. Why? Well, as we see later on, the Thing in the basement can manifest out of mirrors.

So why is there a mirror hanging by the fridge in the kitchen? Seems like a massive safety oversight.

None of the girls seem very intelligent. After one of the teens is bitten by something unseen in the swimming pool, Tomoko tells them that the injury was caused by (I shit you not) an invisible weasel. No one questions that at all. Later, Yuka is attacked and bitten by Guzoo in the kitchen (see? I told you the mirror was a safety hazard) but survives. Tomoko chalks it up to a wild animal attack. Again, no one questions a single absurd word that comes out of Tomoko’s mouth.

And then, just to underline the idiocy of these girls, the very next day, Yuka decides to go back into the kitchen and stand in front of the mirror again. This time, Guzoo drags the young girl through and rams a wiggly appendage down her throat. Yuka all but explodes into pieces, torn apart from inside out by a mass of writhing tentacles. After discovering their friend is missing, the girls finally grow a brain cell, tying up Tomoko and demanding she tell them the truth.

I was on edge from the moment this little slice of mid-80s V-cinema started. It’s directed by Kazuo Komizu, the miscreant psychopath behind the notorious rape nasties ENTRAILS OF A VIRGIN and FEMALE INQUISITOR, the former featuring a scene of a woman having her internal organs pulled out of her vagina. GUZOO: THE THING FORSAKEN BY GOD – PART 1 (I have no idea if there ever was a Part 2) does start with an exposed thigh and a close-up of full, pouty lips. The teen protagonists strip down to bathing suits for a romp in the pool. But by the midway point of this 40 minute flick, not a single nipple had been exposed. I kept expecting it to go full blown sleazy. I half expected lesbian rape when the girls tied up Tomoko. I knew the monster in the basement had more tentacles than you could shake a stack of UROTSUKIDOJI OAVs at, but, to my GREAT surprise, none of those tentacles ever found their way inside... well, you know.

So at the very least, GUZOO: THE THING FORSAKEN BY GOD – PART 1 is completely rape free. Thank god for small favors. It’s plenty gory though with a handful of really entertaining deaths, chief among them a gross disembowelment and a decapitation which results in great geyser of blood. The creature effects range from bad to slightly above bad. Wobbly tentacles on sticks and strings don’t really inspire fear, and Guzoo itself is just an ill-fitted rubber suit. However, the staging of the attacks are fairly impressive and I will admit to actually feeling a bit of claustrophobic anxiety during the final five or six minutes. All in all, I’ve seen a lot worse.

The film is a nitpicker’s dream though so if you have movie logic ADHD, stay far away from this one. The geography of the house makes no real world sense with hallways and staircases suddenly appearing out of thin air. Character motivations exist solely to push the story forward and the whole underlying premise beggars belief. But I don’t think those things matter much. This is, after all, just a throwaway bit of Japanese V-cinema, one which would have fit in well in shows like Tales from the Crypt or Masters of Horror. It’s short, sweet, dumb and gory, an overall pleasant well to kill an hour.