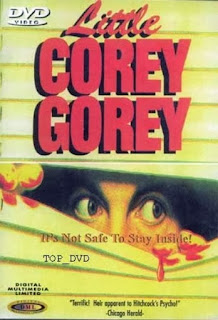 Situated comfortably between DON’T GO IN THE HOUSE and DON’T TELL MOM THE BABYSITTER’S DEAD, Bill Morroni’s 1993 horror/comedy LITTLE COREY GOREY is an experience that vacillates wildly between barely watchable and barely-able-to-contain-your-giggles. It’s a weird little film, one that could only be made on a budget that barely exists. Had it been more professionally made, it probably would have come off as crass and mean spirited, maybe even a bit too tryhard for its own good. But with non-professional actors saying their non-professionally written dialogue in a non-professionally executed slapdash flick, LITTLE COREY GOREY actually manages to attain the kind of black humored, B-movie charm it desperately wants to own.

Well, most of the time anyway…


It begins rather annoyingly enough with the titular Corey Gorey being pushed around by his alcoholic, abusive stepmother and his age improbable racist stepbrother. When Corey can’t find his stepmother’s television remote, he’s tied up and hanged from a curtain rod in the living room. He shows up at school the next day black and blue from the abuse. As he waits for his homeroom assignment, he meets problem child Jackie, an attractive brunette with a personality as nice as broken glass. But being an imbalanced ball of hormones, Corey is instantly smitten.


Noticing an Ozzy Osbourne poster in her locker, Corey buys two tickets to an Ozzy concert, stealthily hiding one inside Jackie’s bedroom (and stealing a pair of her underwear while he’s at it). When the big night comes, Corey is heartbroken to find his ticket missing. Turns out his stepbrother Biff lifted both the ticket AND Jackie’s skirt, a double decker of a dick move. Having had enough, Corey attacks Biff, and one head first dive through a glass shower door later, Biff is no longer breathing. Fearing the wrath of his stepmother more than the police, Corey ties her up on the sofa and chops Biff up into itty bitty pieces.


And this is where things start to get out of hand.


And this is where things start to get REALLY out of hand.


Simply put, this is probably not a movie for the more logically minded viewer. It is absurdity piled on top of absurdity, spiraling so far down the rabbit hole of weirdness that it barely registers as odd when Corey feeds his stepmother a hamburger made from a dead woman’s arm. To Morroni’s credit, he knows absolutely no one would ever take this movie seriously so he doesn’t even try to build characters in a reasonable manner. It isn’t that Corey is a bad person or even a good person, it’s that he’s trapped in a movie universe teetering on the edge of chaos. So when Corey does despicable things as a result of his own terrible luck, the film never steps back and asks us to contemplate a damn thing. We just have to accept the brute force fact that Corey isn’t just unlucky, he’s pathologically stupid and every decision he makes will do nothing but push the film further down the IQ ladder.


And that movie universe Corey is trapped in? Well, it includes an escaped mass murderer killing his way across the state, a similarly abused neighbor girl who in any other movie would be a moral counterpoint to all the nasty shit going on in the Gorey house, and a gaggle of teens all too willing to ignore a tied up alcoholic on a couch during a house party.

Is any of this “realistic”? Nope. Not a damn thing about this movie is realistic and therein lies most of the charm. Because this isn’t a serious minded black comedy or a go-for-the-throat horror film. It’s just a joke, a steady cackling of barely intelligible syllables pouring out of the mouth of someone who has no issue with drinking in public. Will you laugh? Maybe. Will you cringe at the near constant racist shit that comes pouring out of people’s mouths? Probably. Will you get anything substantial out of it? Definitely not. But then again, you won’t have to put anything into it either.

In summary, LITTLE COREY GOREY is equal parts humorous and tedious, like a standard 80s teen comedy crossbred with absurdist horror flicks like MICROWAVE MASSACRE. Does that sound like a fun time to you? If so, dive right in. For me, I enjoyed the film for what it was knowing full well it will never be anything other than that. It’s amateurish, sure, but that’s part of the charm. There are far, far worse early 90s attempts at black humor coated horror schlock, but I will say… your mileage may vary. And by 'vary', I mean, you might never forgive me for this recommendation.
Posted by David Grant at 2:06:00 AM
Email ThisBlogThis!Share to TwitterShare to FacebookShare to Pinterest
Labels: 1993, Bill Morroni, black comedy, Horror, Horror comedy, Little Corey Gorey, William Morroni