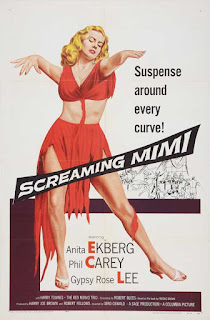 This is the second part of a two part review of The Screaming Mimi, both the Fredric Brown novel from 1949 and the film adaptation from 1958, with a few stops in the land of the giallo along the way, in particular Dario Argento's The Bird with the Crystal Plumage from 1970.

A full plot synopsis is not necessary here as Gert Oswald’s film follows Fredric Brown’s novel fairly closely. The differences are mostly minor – Bessie’s name has been changed to the much less rural-sounding Virginia, Sweeney’s occupation has gone from straight journalist to gossip-column publicity hound, and Chapman Wilson is now Virginia’s age-improbable step brother – but there is one major difference that effectively neuters the mystery angle of Brown’s narrative and that is in the way the mystery unravels.

The film begins with Virginia, played by the buxom Swedish bombshell Anita Ekberg, running out of the ocean in a tight black swimsuit, all the better for ogling her astounding figure. She then enters an outdoor shower, strips off the swimsuit and is promptly attacked by a knife-wielding maniac. After the madman has been shot dead by Wilson, Virginia picks up the knife, screams and the film begins proper. We then transition to the Highland Sanitarium (ironically the same sanitarium our psychopath has just escaped from) where Virginia is placed under the care of Doctor Greenwood, the film’s version of Brown’s Doctor Greene. As Virginia recuperates (or rather stagnates), one of Greenwood’s colleagues notices how much time Greenwood spends with her. In an act of total unprofessionalism, Greenwood implores Virginia not to get better per se but rather to “forget it”. Just forget her trauma. Forget her experience. In other words, his “treatment” is just avoidance and it’s this little element of Oswald’s film that adds a kind of delicious irony to the proceedings.

But do you notice the problem with this film’s opening scenes? The narrative of a classic detective novel is usually divided into two halves. Tzvetan Todorov divided the traditional detective novel narrative into two distinct, though interconnected, segments:


This simple narrative division is what makes the solving of the crime so interesting. We begin, or we usually begin, with a dead body, the crime happening sometime in the diegetic past of the narrative. We then start, through the narrative’s detective figure, to piece together the events leading to the crime, finally arriving at an apotheosis, a conclusion or revelation that satisfies our deepest curiosities and brings the diegetic past into the present. It’s how this kind of thing works. It’s the only way this kind of thing works. But instead of slowly revealing the truth behind Virginia’s past and bringing to light the real identity of the killer, Oswald’s film presents us with the solution at the start and seeing as the film plays mostly straight with us with very little in the way of narrative complications and red herrings, anyone with a modicum of an attention span will figure the whole thing out long before Doc Greene falls to his death.


But honestly, and this is the film’s biggest, most glaring flaw, Oswald’s adaptation isn’t really interested in the mystery. Shot on the cheap (Virginia’s “door” on her “dressing room” is literally just a piece of wood with “Yolanda Lang” written in chalk on it), Oswald needed something to bring in the male viewers. So he went with Ekberg, a remarkable beauty who was, at that time, more known for her looks than her acting chops (whether or not that ever changed is something up for debate). The film’s singling her out as lead should tell you everything. In Brown’s novel, she was a silent, unattainable figure, the classic noir blonde who hides a dirty secret. Brown’s entire gag was to set Bessie (or Yolanda) up as a victim, a thing that needed protection. The last minute plot reversal serves as a pointed reminder that women are not to be underestimated, that you can in fact burn off your wings by trying to reach the sun. Brown deliberately keeps Bessie clouded in mystery. Oswald brings her front and center and really… there isn’t much of a character to deal with here.

Ekberg spends most of her on screen time talking without saying much of anything. She is obviously traumatized, often confused, and does little to inspire sympathy. She is given an opportunity to prove why she is the new hot ticket on the gentlemen’s club scene by dancing around in a barely there outfit, but it’s difficult to get your rocks off when you just spent the past twenty minutes watching her hit an emotional rock bottom. So the presentation of the character is confusing. Are we supposed to lust after this women or are we supposed to sympathize with her? Ekberg’s performance, hindered by the bewildering mess of narrative events, makes it difficult to do either.

Further reducing the importance of the detective story side of things, Oswald decides to give us a weak, uninteresting love story. Sweeney and Virginia fall in love (in record time, no less) and the second half of the film splits the running time between a detective story and a love triangle melodrama. But if Sweeney is supposed to be the knight in shining armor here to rescue Virginia from the callous grasp of the evil Doctor Greenwood, Oswald’s handling of the material shoots Sweeney in the foot before he ever started to walk. Sweeney and Greenwood are more or less the same person and while Sweeney might be a bit more compassionate in his dealings with Virginia, he echoes Greenwood’s insistence that Virginia should just bury her trauma and unhappiness. Between all the melodramas and obnoxious musical performances, Sweeney does manage to find the time to crack the case, get a false confession from a dying Doctor Greenwood and confront Virginia. To say the ending feels horribly miscalculated here doesn’t do it justice. Without any kind of guiding narrative hand, the whole film feels listless and flat.

Though Argento has said to have been inspired by Fredric Brown’s novel, Brown doesn’t receive a single credit anywhere on Argento’s first three films, THE BIRD WITH THE CRYSTAL PLUMAGE, THE CAT O’ NINE TAILS and FOUR FLIES ON GREY VELVET, three films which use almost the entirety of Brown’s novel when viewed together. The character of Godfrey makes an appearance in FOUR FLIES ON GREY VELVET and Sweeney’s break-in into Doctor Greene’s office finds its way into THE CAT O' NINE TAILS. But THE BIRD WITH CRYSTAL PLUMAGE uses almost all of Brown’s detective stuff, from the vital clues at the scene of an attempted murder to the artist living in obscurity with a connection to the crime, Argento wasn’t merely inspired by Brown’s novel, he lifted most of it wholesale, even if he twisted the details to fit his own imagination.

The biggest change in Argento’s adaptation (and yes, I think that word fits here) is the change of Sweeney, a newspaper reporter, into Sam, a writer. Unlike Sweeney, Sam doesn’t have an immediate, lustful attraction to the nearly murdered Monica Ranieri. He is driven solely by his own obsessive need to know what it is that went on in that art gallery. His motives are no less selfish than those of Sweeney however. Sam’s refusal to move on with his life puts his girlfriend in danger. Sweeney’s desire to solve the murder is rooted in his desire just to get in some face time with the lovely Yolanda Lang. Both characters are self-obsessed and self-destructive, both possessing vices that call into question their ability to survive their respective horror stories.

Another change, Argento turns the statue of the Screaming Mimi into a gaudy expressionistic painting, if only to make matters a bit simpler for the design team. In Oswald’s film, the statue is referred to as a “fetish”. Now a fetish does not necessarily need to be sexual, but it’s difficult to put that connotation out of mind when the film constantly parades Ekberg around like a large breasted show horse. Were the film better handled, maybe Oswald would have gone the route of Argento, providing the killer a bit more sexual relish in the act of murder. By the end of THE BIRD WITH THE CRYSTAL PLUMAGE, Argento has an insane Ranieri standing over an incapacitated Sam, all but licking her lips in anticipation of penetrating his body with her phallic blade. The Screaming Mimi in both films features a perversion of sexual conquest but only in Argento is the angle ever explored.

If there’s one thing Oswald’s rendition of the Screaming Mimi has over both Argento and Brown’s versions, it’s in the treatment of homosexuals. In Oswald’s film, the owner of the bric-a-brac store where the Mimi is found is a heterosexual. In Brown’s novel, he’s an almost predatory gay man. In Argento’s film, the character is no less predatory but played as the typical “funny faggot” character that many Italian productions unfortunately offered up. There are gay characters in Oswald’s film however. The hostess at the gentleman’s club is clearly a lesbian sharing a room with a striking young woman and she is given royal treatment here, funny without being overbearing, written with a great deal of personality and, believe it or not, seen as perfectly normal, which of course homosexuals are.

But it’s really the understanding of how a murder mystery works that makes THE BIRD WITH CRYSTAL PLUMAGE soar while SCREAMING MIMI falls to earth with a thud. Argento keeps the traditional detective story narrative complete, doling out small clues and revelations along the way so we can compile a list of suspects in our heads. SCREAMING MIMI just gives us the solution and makes us wait to see how Sweeney figures it out. Strange as it may sound, I would recommend Argento’s film over Oswald’s if you were at all curious to see Brown’s novel on the screen, even if Brown’s source material has been reworked and twisted by Argento’s vision. Yes, it’s the better film of the two but it’s also the better adaptation.
Posted by David Grant at 3:12:00 PM No comments:
Email ThisBlogThis!Share to TwitterShare to FacebookShare to Pinterest
Labels: Film Noir, Four Flies on Grey Velvet, Fredric Brown, Giallo, Krimi, The Bird with the Crystal Plumage, The Cat o' Nine Tails, The Screaming Mimi
Newer Posts Older Posts Home
Subscribe to: Posts (Atom)