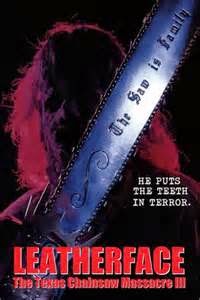 
While it does not come anywhere near the levels of insanity contained within the 101 minutes of THE TEXAS CHAINSAW MASSACRE 2, LEATHERFACE is a surprisingly decent, if not wholly predictable, horror film. Some of the set pieces are great. The first reveal of Leatherface, the scenes of police pulling putrified remains from a mass grave, the final reel assault on the Sawyer home by a machine gun toting Ken Foree… these are the scenes that immediately spring to mind when I think of this film. And while I am well aware that the connective tissue holding these set pieces together is flimsy and cheap, I still enjoy myself enough when I sit down to watch it.


If LEATHERFACE has any major flaws, it’s that the film looks cheap and feels half finished. Simply put, you can tell that this was a low budget, tightly scheduled affair. If that wasn’t enough, LEATHERFACE was yet another major release that found itself hacked to pieces by the MPAA. Depending on the version you watch (I’ve seen four so far: the theatrical cut, the uncut director’s cut, a foreign workprint composite and a standard workprint), LEATHERFACE feels like a different film. The theatrical and uncut versions of the film both feature a horrible studio mandated ending. The unfortunate result of test screenings, this ending completely changes the tone of the film and, I would argue, removes any emotional satisfaction from the climax. The workprints rectify those problems but reinstate footage that was wisely cut from the theatrical and director’s cuts of the film. So no matter what version you watch, you’re not going to get the best possible version of LEATHERFACE and that’s a damn shame.


Say what you will about the TEXAS CHAINSAW MASSACRE franchise, the early entries always managed to gather up an interesting and engaging set of villains. LEATHERFACE has one of the best. Featuring a then-unknown Viggo Mortensen and dependable character actors like Joe Unger and Tom Everett, LEATHERFACE contains a great deal of personality and like Sam Jackson once said, personality goes a long way. The secondary performances outshine the leads completely and help to masquerade the often lazy pacing that plagues the second act of the film. The various Sawyer families in these films are all so perversely engaging that I would be fine with just watching them bicker and argue for two hours.


LEATHERFACE takes its narrative cues not from the original film but from THE TEXAS CHAINSAW MASSACRE 2. Both films feature a male/female lead character duo and a gun wielding bad ass tracking down the killers. Both films give their antagonists a decent amount of screen time and both have comedy set pieces. To be honest, I’m glad that LEATHERFACE chose to pattern itself after the sequel and not the original. The later films in the franchise, specifically the terrible TEXAS CHAINSAW MASSACRE: THE NEXT GENERATION and TEXAS CHAINSAW 3D, used the original film as the blueprint, but couldn’t back up their threadbare stories with the same kind of visual and auditory madness that Hooper came up with way back in 1974. Using the sequel as a basic narrative guide gives LEATHERFACE a sense of scope (albeit still small) and definite forward momentum. It manages to carve out its own little identity in a franchise that quickly became just the same simple story over and over again.