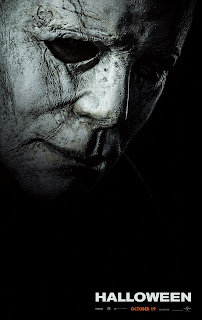 “You know what I think? I think that we’re all in our private traps, clamped in them, and none of us can ever get out. We scratch and we claw, but only at the air, only at each other. And for all of it, we never budge an inch” – Norman Bates, PSYCHO

There’s quite a bit of Norman Bates lurking inside the Michael Myers of John Carpenter’s HALLOWEEN. This was before the film had spawned a complicated franchise full of brother-sister revelations, mystic Celtic runes, and reality TV show shenanigans. The Michael Myers of HALLOWEEN, which will be referred to as HALLOWEEN 1978 from this point on, is just a man (albeit one who can take some serious abuse), a vessel for a fractured, psychopathic personality forever fixated on a single act of violence he committed as a child.

That quote from PSYCHO up there? That is what Norman is referring to, not relationship troubles or family issues, but psychopathy, a point of pure trauma that renders an individual perpetually stuck in time. For Norman, his sexual desire for his mother and his subsequent act of matricide has left him in a regressive, almost childlike state, every feeling of lust a potential cause for murder. For Michael Myers, his act of sororicide has left him in a similar state, his obsessive need to keep murdering his sister triggered when young Laurie Strode wanders onto his front porch. Just like that, Michael has found a surrogate sister and the cycle of violence begins anew.

Carpenter’s film is best watched as a singular entity. Every film that came after changed the nature of both the narrative and the villain at the center of it. In erasing all of the sequels, David Gordon Green’s HALLOWEEN 2018, gets back to the basic underlying psychosis of the original film. Michael is not Laurie’s brother. There is no Man in Black, no psychic connections to family members, no talk of “the rage” beating within Myers’ black heart. Michael is once again just a psycho in a mask.

But Green’s film does something quite interesting… it addresses the impact of Michael’s 1978 killing spree by reinventing Laurie Strode as a PTSD-riddled prepper who, like Michael, is stuck forever in time, a victim of her own brand of psychosis. The film is at its most interesting when it explores this issue, painting Laurie and Michael as two different sides of the same damaged coin, both linked by violence, both scarred by violence, both doomed to violence. There’s no need for Laurie and Michael to be sister and brother in this narrative. Here, they’re linked by something far more intimate and, quite possibly, much stronger than simple DNA.

Laurie is estranged from her family, stuck in her “own private trap”, a paranoid, ex-alcoholic agoraphobe whose home is littered with weapon caches, door locks and booby traps. In the same way that Michael sits waiting for his opportunity to finish what he started all those years back, Laurie’s life has been consumed with the thought of Michael escaping and the vengeance she wishes to bring down upon him. Even with a hundred plus miles and four decades between them, they’re still fighting in the upstairs bedroom of the Doyle house.

This is the central narrative thrust of the film and when it is at the forefront, HALLOWEEN 2018 is a strong, heavy piece of work. Unfortunately…

For as much love and respect that Green and his co-writer Danny McBride show to Carpenter’s original film, HALLOWEEN 2018 simply does not feel like a HALLOWEEN movie. Gone are the playfulness and the attention to suspense. Michael Myers doesn’t feel like a silent, patient stalker anymore. He feels like a goddamn ballistic missile, barreling through random characters for no other reason than the film needs for him to show up every five minutes. HALLOWEEN 2018 packs a surprisingly high body count and not much else. Characters show up just to die and that alone makes it feel like you’re watching Jason Voorhees in a Michael Myers mask spend the day in Haddonfield.

It’s a movie that simply doesn’t work whenever Laurie Strode is not on screen. Green attempts to create a new Laurie in Allyson, Laurie’s granddaughter, but the film doesn’t seem all that concerned with weaving her into the narrative properly. Her boyfriend troubles don’t affect the plot and her friends are underdeveloped body count fodder whose deaths are so random that they feel like they’re taking place in some other movie. When Allyson finally has her run in with Michael, I think we’re supposed to feel like this is some grand plan of fate, but it all comes across as a giant distraction from what we really came to see.

The finale of the film is definitely a crowd pleaser, even if it fails to offer up any real sense of closure. But therein lies another problem... Had this been Jamie Lee Curtis’ first return to the franchise since 1981’s HALLOWEEN 2, there might be reason to celebrate. However, if we ignore the third installment and the horrible remake films, Curtis has appeared in over half of the franchise installments. It’s simply no longer a treat to see her in a HALLOWEEN film. HALLOWEEN H20: 20 YEARS LATER might be an entirely different beast, but watching an alcoholic, anxiety ridden Laurie best Michael in a mano a mano showdown for psychological closure is slightly more dramatically interesting than watching Laurie stalk around her own home in the dark with a shotgun.

The existence of Steve Miner’s film robs HALLOWEEN 2018 of some of its glory, if not its entire gimmick. The particulars might be different (the settings, the hair styles and clothing, etc.), but the films are largely the same. The most interesting character in the film has to share running time with completely uninteresting teens up until the showstopper finale when we can all sit back and finally enjoy some good old fashioned bloody therapy.

HALLOWEEN 2018 is a good looking film plagued by bad pacing, uninteresting side characters, an overabundance of Michael Myers standing around in the open, and one horribly executed plot twist that should have been torn out and flushed down the nearest toilet. It looks like HALLOWEEN 1978, but it certainly doesn’t feel like it. It’s an ‘almost’ kind of film, one that comes so close to being exactly what It wants to be. Unfortunately, it just doesn’t hit the mark.