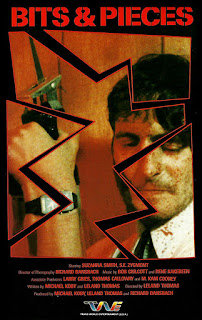 A sexually frustrated killer with a mother hang-up lives alone in his small, rundown apartment. His only companion is a dolled up female mannequin. He spends his days muttering to himself, awash in psychosis. By night, he stalks the city streets in search of fresh female prey.

You’d be forgiven for thinking I was talking about Bill Lustig’s 1980 shocker, MANIAC, but unfortunately, I’m not. This is BITS AND PIECES, the sole directorial effort from Leland Thomas. It takes Lustig’s shock classic as its main inspiration, filling in the holes with your typical low budget cop-on-the-trail-of-a-killer yawner. It’s a weird film but an unrepentant snooze fest, the kind of movie that would have given the fast forward button on your VCR remote quite the workout back in the day.

The film's only real original thought is a bit of gender reversal. In most slasher movies, the killer would be kidnapping strippers from the local titty bar. Here, our killer stakes out the local male strip joint, snatching up various blondes on their way home from giggling at floppy penises. That is quite literally the only thing this film does differently from the rest.

Our heroine is Rosie, a college aged blonde living at home with her frumpy father and age improbable mother. After Rosie’s friend is found dismembered in a garbage bin, she falls in love with the detective in charge of catching the killer, whom the press have labeled the “Bits and Pieces Killer”. Unfortunately for Rosie, the B&P Killer, Arthur, is out to get her, well aware that she may have caught a glimpse of his face as he stood waiting for her friend to head to her car.

In any other film by any other director, this simple set-up would have been enough to carry the movie. But here, this simple, dependable set-up is fumbled badly. Once Rosie and Carter begin their awkward and wholly unbelievable romance, the movie begins meandering, vacillating wildly between Rosie’s softcore ahem romance plot and scenes of Arthur terrorizing women while talking to his rather bitchy dead mother. Arthur’s side of the story stays on track. Rosie’s side of the story becomes a separate film altogether. The two only reconvene in the final 15 or so minutes.

As expected, Arthur’s side of the story is far more interesting and effective. Arthur himself might not be physically intimidating in the least (he’s just a scrawny dude in a dress shirt and tie), but the scenes in which Arthur kidnaps, taunts and eventually kills his victims are actually quite quease inducing, thanks in large part to the actresses portraying the victims. They all look absolutely terrified. I have to wonder if Leland Thomas actually told these actresses that they would be tied up and fondled while a sweaty dweeb waved very real sharp objects in their faces. All the actual violence is kept off-screen, but that doesn’t stop the murder set pieces from being incredibly effective. For once, I’m glad a slasher movie couldn’t afford flashy special effects.

The ending of the film is also effective, containing one genuine surprise that I didn’t see coming. It’s just a shame that those final 15 minutes come after such a long, hard slog of a film. BITS AND PIECES is a movie that could have worked because BITS AND PIECES is a movie that has worked before. We’ve seen this kind of thing done well, done poorly and done to death. Had Thomas not mishandled the pacing, the middle section of the film would not have been so catatonically dull. Had Thomas, who also co-wrote the screenplay, given Rosie something to do besides make out with a balding middle aged man, maybe I would have had someone to root for or care about. Arthur might have been your typical mommy obsessed nut job, but as Norman Bates and Frank Zito prove, a mommy obsessed nut job can be a compelling villain if written well.

And that’s perhaps the greatest sin BITS AND PIECES commits. Like this review, it simply isn’t written well. It certainly chose its inspiration wisely, but it failed in recognizing what it was that made its wellspring such a memorable, haunting bit of work.
Posted by David Grant at 9:13:00 PM No comments:
Email ThisBlogThis!Share to TwitterShare to FacebookShare to Pinterest
Labels: 1985, Bits and Pieces, Horror, Leland Thomas, Slasher film, Tally Chanel
Newer Posts Older Posts Home
Subscribe to: Posts (Atom)