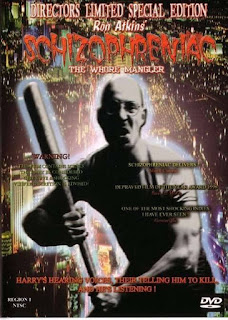 With a title like SCHIZOPHRENIAC: THE WHORE MANGLER, you would probably expect something shocking - electrifying even - like sticking a fork in a wall socket. What you definitely wouldn’t expect is for the opening X-rated warning card (a self imposed X-rating, no doubt) to give way to a lovely message dedicating the film to the director’s deceased father. If that wasn’t off-putting enough, the film then transitions from this heartfelt “we’ll miss you” in memoriam to an extended shower scene featuring not just full frontal female nudity, but lingering close-up shots of the woman’s crotch.

What I DO know is that I should not be referring to SCHIZOPHRENIAC: THE WHORE MANGLER as a “film”. What it really is is an 85 minute, shot on video migraine, complete with every in-camera visual effect the finest camcorders of 1997 could offer. It's a simple story of a low budget filmmaker/coke fiend named Harry that hits all the requisite “maniac on the loose” notes. Parental abuse? Check. Mother who dressed her son up in women’s clothing as punishment? Check. Frequent (and I mean FREQUENT) outbursts of misogynistic claptrap replete with constant f-bombs? Check. Incessant, droning music meant to hide the ever present whine of videotape noise on the soundtrack? Check.

But truth be told, although this is in fact a movie about a homicidal misogynist (among other things) raping and murdering women, I’m not sure SCHIZOPHRENIAC: THE WHORE MANGLER is actually trying to be a horror film or even a thriller. It might just be a very poorly calculated black comedy. After all, lead actor John Giancaspro is in full hyperbolic ham mode throughout the entire film, barking out his dialogue and occasionally even breaking the fourth wall for a cringe worthy in-joke. It’s not so much a performance as it is a rampage, carried out with all the grace and care of a back alley abortion.

Harry can’t sit still, bouncing his way through every scene. His profanity laced dialogue reminds me of a child who just discovered four letter words. When we’re introduced to Harry, it’s at the kitchen table as he pounds away on a typewriter, snorting off a mountain of coke while an ESCAPE FROM LA poster hangs in the background. He dances around naked to Bee Gees songs, dick flapping in the wind, and has conversations with his best friend, a ventriloquist dummy he calls Rubberneck. This is not a character that inspires fear or concern, just bewilderment.

Oh and Harry never shuts up, by the way, screaming and cursing through every single scene of the film. And as if that wasn’t bad enough, director Ron Atkins directs this whole mess with the subtlety of an atom bomb. Constant fast edits, long strings of unnecessary close-ups, quick flashes of Camcorder assisted color inversions or negatives… It’s just a non-stop barrage of screaming and editing and yelling and in-camera fuckery that doesn’t add up to anything but a nose bleed.

I suppose this was an exercise in purposeful offense making, like Atkins and Co. thought they were making some kind of outrage piece, a real outré slice of low budget filmmaking that would test the will of the audience, hence all the homophobia, racism, sexism, castrations, shootings and nipple slicing. But SALO, this is not. Hell, it barely rises to the level of AMATEUR PORN STAR KILLER, another grossly self indulgent movie made by a filmmaker who should have known better. It’s difficult to be offended when the film is all but mocking itself. This isn't a thriller. It's a bad joke told loudly.

It is remarkably difficult to recommend anyone seek this hunk of shit out for a quick and dirty watch. The fact that the film has a sequel is probably the most interesting and frightening thing about it. It is simply way too long and way too obnoxious to be anything but a waste of time, a routine story told better by a thousand other movies. There’s no reason to watch it or even acknowledge its existence. Far from being entertaining or outrage worthy, it’s just an overlong, dull slog of a film. It’s painful and unpleasant so… I guess in some ways it actually IS like sticking a fork in a wall socket.
Posted by David Grant at 10:11:00 PM 1 comment:
Email ThisBlogThis!Share to TwitterShare to FacebookShare to Pinterest
Labels: 1997, black comedy, Horror, John Giancaspro, Maniac, Ron Atkins, Schizophreniac the Whore Mangler, shot on video, Thriller
Newer Posts Older Posts Home
Subscribe to: Posts (Atom)