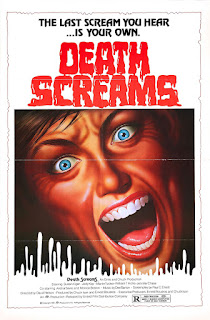 The teens spend the day at the town fair, playing games, eating snacks and smoking pot. Bob and Kathy share their first kiss. Neil finally asks Lily out on a date. They run into the angry teen-hating Sheriff Avery and his weirdo, mentally stunted son, Casey. After growing bored, the teens go their separate ways with plans to meet up later for a bonfire party and maybe a séance in the local graveyard.

But their night quickly goes to shit when the murderer arrives, machete in hand, to bump them off one by one.

DEATH SCREAMS contains about a half dozen victims, but the real killer on display here is the editing. It’s difficult to tell if DEATH SCREAMS was a victim of MPAA mandated cuts or if the person in charge of editing the film just really hated their job. There isn’t a single cut in the movie that feels clean and the violence, when it finally happens, is handled so sloppily that I couldn’t ever tell what the hell was going on at any given time. The opening garroting of the two teens (and yes, it’s a double strangulation carried out with a single piece of wire) is the best example. We cut from their making out faces to their “oh no, we’re being strangled” faces without a single insert shot of a piece of wire coming down over their heads. One moment, they’re in ecstasy. The next, they’re being inexplicably strangled by a piece of wire that magically manifested around their necks.

All of the murder scenes are shot like this. We’re very rarely given any indication that the killer is even present before getting a short, barely comprehensible shot of something shiny whizzing through the air. A character then screams and falls over, or the camera simply cuts to a new scene altogether. There were two separate occasions where I had to rewind the film (and yes, I watched this on VHS) in an attempt to piece together just what the hell happened to a character.

The lousy editing is really only a detriment to the murder set pieces though, as nearly two-thirds of the film is spent simply following these characters around as they go about their days. There is no real lead here, no real Final Girl. It’s very much an ensemble film with a dozen or so characters all given their own bit of screen time. We get to see Lily interact with her stubborn, overly protective grandmother. Bob and Kathy’s courtship plays out over multiple scenes stretching a good half of the film. We see Neil rebuffing the advances of other women, in particular Ramona, in his pursuit of Lily. We spend so much time observing the ins and outs of the social lives of the "teenagers" that we barely get to spend more than two scenes with our red herrings, the bitter Sheriff and his model train loving son. That’s a damn shame because what is hinted at during the film, that Casey was brain damaged in a car crash that involved some of our teenagers, would have definitely heightened the intrigue.

But instead of a believable killer with a proper motive, we’re given a killer with the most generic backstory imaginable, a bit of “woe is me” bullshit that might have been interesting had it been referenced at least once during the first 80 minutes of the film. It just comes out of nowhere. The revelation of the killer’s identity is especially annoying here as it turns out to be a character we thought had died earlier in the film. It’s one thing to have a killer fake their death to throw off the other characters (ie. MY BLOODY VALENTINE). It’s another to have a killer who fakes their death for absolutely no reason other than to throw off the audience. There were no other characters present when this person faked their murder. They didn’t show up later pretending to be dead. They just did it because the filmmakers couldn’t figure out a better way of hiding the killer’s identity from the audience. That is a major pet peeve of mine.

I could probably go on for another eight or nine paragraphs, but that would just be time spent kicking a lame horse to death. DEATH SCREAMS is not a good film, but it also isn’t what I would call horrible. The first half is a scare-free slice of teenage life, just light comedy peppered with a little melodrama. The acting isn’t great, but it’s passable enough that the characters all stood out as unique personalities. They’re not insufferable or aggravating. I actually liked some of the characters. It was when the film decided to go full blown horror that the problems really cropped up.

Because as a horror film, DEATH SCREAMS really drops the ball. With the exception of the opening murder and a mid-film asphyxiation, all the horror bits are crammed into one 15 minute segment at the end of the film. Deaths come fast and furious (including one hilariously awful bifurcation), and as a result, all the suspense and tension is sucked right out of it. Had the murders been more spread out, had the cast been smaller and better defined, had the editor actually done their job properly… DEATH SCREAMS could have been a serviceable slasher. As it stands, it’s just a curio piece, a heavily flawed oddity only cared about by completionists and slasher obsessives.