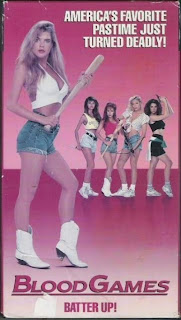 ”I have been pushed around my whole life by lousy men and I’m sick of it.”

A common refrain sung during every viewing of Meir Zarchi’s immortal 1978 exploitation classic I SPIT ON YOUR GRAVE goes a little bit something like this… “all the men in this movie are assholes!”... and yes. Yes, they are. That’s kind of the point. In a genre which typically depicts women as bubble headed life support systems for easy access vaginas, Zarchi’s film comes across as a nasty bit of tit for tat, a sucker punch right to the balls of self entitled, hyper masculine men.

Tanya Rosenberg’s 1990 pseudo rape-revenge actioner BLOOD GAMES tries to play the same tune. We begin at a softball game somewhere in the middle of Hicksville, USA. A bevy of beauties in short shorts beat the ever living snot out of some good ol' boys on the baseball diamond. This triggers a regressive and altogether violent response from some of the local men. With two of their own nearly raped and their head coach stabbed, the girls make a getaway attempt in the team bus, killing a man in the process. Unfortunately, a war hungry, ex-military misogynist and his army of beer swilling rednecks are in hot pursuit. Once their getaway fails and the gloves come off, it’s an all-out battle of the sexes, albeit one with baseball bats, crossbows and hunting rifles.

Virtually every negative action in this movie is caused by a man. The all-male baseball team repeatedly grabs their opponent’s asses, even throwing an elbow into the face of a woman running to second base. Had the girls simply left after the baseball game was over, all of this would have been avoided, but their head coach (who is also the father of our lead protagonist) feels compelled to hold someone up in a bar bathroom just so he can get money owed to him from a bet. The would-be rapists are not just looking for action but for revenge. The misogynist bastard leading the rednecks into battle repeatedly scolds his son for losing to a bunch of broads. It’s just a cascade of toxic masculinity, self entitlement and unhealthy machismo all the way down.

But unlike Zarchi’s film which goes out of it’s way to avoid the gross sexualization of it’s lead character, Rosenberg gives us a playful, nudity filled shower scene, endless shots of asses in barely there shorts, and copious glimpses of bouncing breasts. It also plays the same end game as SAVAGE STREETS, another exploitation film with loose female empowerment goals. Both films give us strong heroines who collapse in fear at the sight of the big bad guy they just seriously injured. Now maybe it’s just me, but I’ve always found this sort of thing a bit confusing. While there’s no doubt that a sexually attractive, scantily clad woman can also be empowering, inspiring and even awe inducing, the clash between sexploitation visual tropes and a genuine female empowerment message can sometimes create a film which doesn’t quite practice what it preaches.

BLOOD GAMES avoids the typical slasher film idea of a single underpowered and underprepared woman overcoming an aggressive male threat. Despite the understandable fear of being shot to death, it’s bevy of ass kicking beauties are more than capable of aggression. We understand that they can easily handle this threat. But it seems the film often wants me to gawk at asses more than it wants me to pump my fists in solidarity, and that threw me off during some of the more tense moments the film offers up. The final half of BLOOD GAMES is great stuff, just a classic 90s action film set in dense woods. I feel the film might have been better off leaving the sexploitation visuals behind at that point. Unfortunately, they persist through most of the film, cluttering up the message along the way.

But perhaps I’m simply thinking too much about this. From start to finish, BLOOD GAMES is an absolute blast, a nicely executed and potent piece of exploitation cinema. It’s not a flashy film, but it’s certainly effective, perfectly paced with an engaging cast of actors and some rather effective action set pieces. It’s also a great bit of cornball fun that would definitely tickle the fancy of Andy Sidaris fans everywhere. So if women in short shorts killing rednecks in the woods sounds like your cup of tea, by all means, sip away. 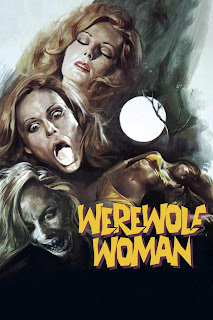 Rino Di Silvestro’s 1976 Italian sleaze fest WEREWOLF WOMAN wastes no time in announcing to the audience just what kind of film it is, offering up an ear piercing scream and full frontal female nudity right out of the gate. This is CAT PEOPLE by way of Joe D’Amato, a lurid little tale of a woman whose past sexual abuse and current, frenzied sexual desires cause her to deteriorate into something animalistic and murderous at the first sign of arousal.

It’s also slightly reminiscent of George Romero’s early masterpiece, MARTIN. Daniela, a striking young blonde, is having nightmares of her ancestor, a woman believed to be a werewolf. Ever since her rape at the tender age of 13, Daniela’s libido has triggered panic attacks, fugue states and worse. When her sister and her new husband arrive at the family villa for a stay, Daniela loses control of the beast within, so to speak.

She murders the husband in secret and is hospitalized, her increasingly dangerous behavior threatening to spiral quickly out of control. Upon escaping the hospital, Daniela goes on a sex fueled murder spree.

This is essentially a tarted up sexploitation film, but there is the same kind of genre deconstructionist undercurrent flowing through it that Romero would use to masterful effect two years later. Is Daniela really a werewolf? Of course not. Martin wasn’t really a vampire either. But both films use these supernatural monstrosities as a kind of allegory for poisonous superstitions, and arcane ideas about sex and adulthood. Romero purposefully kept things vague, but Di Silvestro either doesn’t have the patience for subtlety or simply doesn’t care. WEREWOLF WOMAN is full of scenes of a doctor and a police inspector talking endlessly about clinical lycanthropy (which is a very real psychological malady), explaining away all subtlety and intrigue in the process.

It’s a bit strange to call WEREWOLF WOMAN, a movie in which Dagmar Lassander’s credit is superimposed over an undulating woman’s fully exposed vagina, a pseudo-feminist horror film, but to some small degree it is. The film morphs into a full-on rape-revenge flick during the final act and is never shy about pointing out that Daniela’s condition is both caused by and aggravated by aggressive, sexually abusive men. Daniela’s constant abuse of other women, calling them whores and bitches, is more or less internalized misogyny brought about by the fact that virtually every man she meets thinks of her as just a hole to be filled.

When Daniela finally finds love, it’s with a man who tells her, directly and honestly, that he doesn’t intend on hurting her and that the choice of a relationship with him is entirely up to her. He breaks the mold of what she has come to expect and in doing so effectively removes the trigger for her illness. Her subsequent gang rape (and the death of her lover) prompts the usual response, a channeling of abuse into a kind of righteous reclamation of self, her murderous vengeance acting as a bloody reckoning. This isn’t going to win the praise of feminist film critics everywhere, but it’s a soft progressive attitude you wouldn’t expect to find in a film like this.

And that’s kind of the problem. Simply put, WEREWOLF WOMAN is all over the goddamn place, never sure of what it really wants to be. It seems to want to put forward a more progressive message at times, but it surrounds that message with endless shots of exposed breasts and labia. If the camera clearly views our character as little more than flesh, it’s difficult for the audience to reconcile the presentation with the message. It seems to want to be a sexploitation film, but it constantly derails the eroticism by cutting away to endless scenes of two men sitting or standing in a room explaining the subtext to us as if we were children. It seems to want to be a horror movie, but it consistently sacrifices atmosphere for pornographic sensibilities.

It’s a film I couldn’t really come to grips with during my viewing because I couldn’t ever find a solid enough piece of land to stand on. The ever-changing tone of the film, the strange mixture of psychological drama, police procedural, gore-drenched horror, soft pornography and sexual politics… it should have left me feeling rather giddy. I happen to like schizophrenic films. But it all just kind of falls flat here. It’s not a bad film, per se, just a horribly undisciplined one. I suppose if you simply latch on to one of the many threads the film offers up and don’t pull so strongly that it all unravels, you could find a lot of joy in WEREWOLF WOMAN.