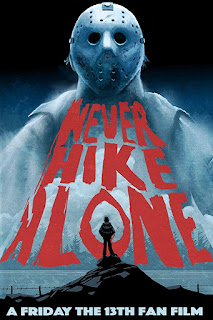 Fan films are, by and large, quite awful. Let’s just get that out of the way right now. With their fanboyish attention to detail and their oftentimes obsessive need to reproduce whole swaths of visual and auditory elements from their wellspring of inspiration, fan films often feel like masturbatory indulgences or haughty bits of hero worship. The fact that they’re usually amateur productions works both for and against them.

Des Shaw was able to push HALLOWEEN into bizarre new territory with his fan film HALLOWEEN: INFERNO largely because he was able to free the franchise from its studio owned shackles. No one was around to tell him that audiences would prefer 'more of the same' every step of the way. That’s a positive, for sure. But the film looked like garbage, sounded like garbage, was acted like garbage… It feels and looks cheap because it was cheap. As a result, it’s difficult to take the film seriously. It just felt like a home movie.

The fan films that lavish attention on mere details (for example, count how many HALLOWEEN fan films there are that include at least one low angle shot of Michael walking down a flight of stairs), simply trying their best to reproduce their more expensive cousins, are the films that fair the worst. The fan endeavors that attempt to pull their favorite franchises out of their safety zone and into brave new waters… well, they might not be perfect, but they certainly are welcome.

NEVER HIKE ALONE, a new FRIDAY THE 13TH fan film from co-writer/director Vincente DiSanti tries to have it both ways. DiSanti eschews the normal FRIDAY THE 13TH set-up, ditching the gaggle of obnoxious teens for a single hiker named Kyle, an outdoor vlogger who accidentally stumbles upon the ruins of Camp Crystal Lake and pays dearly for it. For the majority of the film’s 53 minutes, Kyle is our sole protagonist, just a simple man trying to survive an encounter with the masked, undead Jason Voorhees.

The simple shift in tone from slasher film to survival horror makes NEVER HIKE ALONE feel like a fresh new experiment within the franchise, even though all DiSanti and his co-writer Drew Leighty (both men act in the film; DiSanti plays Jason while Leighty stars as Kyle) have done is highly compress the formula. Without a bevy of characters, all we need is a little set-up and an introduction to the setting. From there, the film moves into conflict, each encounter with Jason acting as a substitute for what would have been a full fledged murder set piece in an actual film. We finally settle in to our climatic chase scene in the final third of the film. What comes next is… well, I’ll get to that in a moment.

This tightly compressed narrative seems at odds with the running time. Did this film need to be 53 minutes? Probably not. Much of the film is spent on atmosphere, just Kyle wandering through the decrepit camp grounds, scenes which would have been cut down drastically in any studio production. Personally, I found the time spent exploring the camp grounds to be far more frightening than anything else in the film. It’s just build up. It’s just atmosphere. But those scenes are cleverly constructed, often framed with windows, doorways and forests in the background. I’ve long held the belief that the single most frightening location for a horror film is a dark hallway lined with open doors. Because we know there is a threat lurking about, every possible entrance becomes a potential hazard. There’s a world of tension to be mined in simply following someone through a dark room. If you need evidence for that claim, look no further than this film.

When Jason finally does make his grand entrance, the film becomes a far more routine bit of horror. I have some issues with the representation of Jason in this film. He seems to obey different rules at different times. The first time we glimpse him, he seems capable of teleportation. The next, we see he is able to walk as fast as our protagonist can run (ie. the standard slasher film bullshit). But then our lead is somehow able to give him the slip. It’s a slight inconsistency, albeit one the narrative needs in order for it to work. Our character suffers a gash on his shin, one that apparently is life threatening. This injury serves as the crisis point, the lead in to the climax. It’s the grand hurdle that needs to be jumped.

But in reality, it’s just a flimsy excuse to get Kyle back to Camp Crystal Lake so that Jason can find him again. This life threatening injury is miraculously healed with a little rubbing alcohol and a few stitches. This stretch of the film feels a bit like a video game, with the gravely injured character being completely reinvigorated after finding a first aid kit lying in a corner. Later, the same character who was reduced to a struggling, suffering lump by a barely bleeding cut on his leg will manage to walk away from having his kidney punctured by a machete. Again, this is an inconsistency, a logical burp that needs to occur because if it didn’t, the script wouldn’t work. Forgivable, sure, but still lazy.

As for this version of Jason Voorhees… I was glad to see that NEVER HIKE ALONE keeps the tradition of Jason being largely incapable of killing anyone in a one-on-one fight. When he has multiple targets, death is largely inescapable. But one-on-one? Well, that’s when Jason becomes little more than an annoyance, if not an outright incompetent stooge. I’m glad this short film recognized that (consciously or not). That isn’t a slight against this film, mind you. It’s simply a fact. A whole group of teens is no problem for Jason, but a single girl with a little bit of a head start? He dies every single time.

Unfortunately, for as good as this film is for the first 45 or so minutes, it completely falls apart at the end, becoming just another bit of annoying, garbage level bit of fan service. I absolutely hated the end of this film and not simply because the sudden arrival of a fan favorite character reduced the film to a cameo machine that spat in the face of its own ambition. It’s because up until that point, it didn’t feel like masturbatory fan fiction at all. It felt like an actual film, one that was trying to be something different, something that the studios would never give us because it wasn’t just a cheap cash in or a low effort money grab. But in those final five or so minutes, NEVER HIKE ALONE stoops to sitcom levels of fan service with a reveal that exists only to make fanboys squeal. It's a decision that is surprisingly, disappointingly Hollywood.

Up until the 45 minute point, NEVER HIKE ALONE is a great fan film, maybe even one of the best fan films I’ve ever seen. But instead of a well deserved ending, we get a cheap cop out with no resolution. Just applause bait. And that’s a real goddamn shame