NIGHT OF THE DEMON 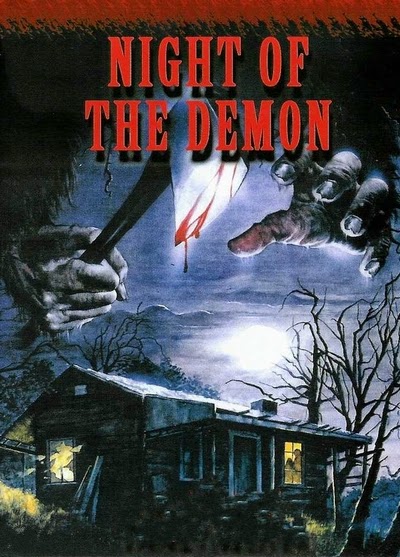 We’ve all heard the stories about the writing of Naked Lunch, about how Burroughs was doped out of his mind, just writing in stream of consciousness style, laying pages all over the place as he went. When it came time to compile the manuscript, Burroughs and his friends Allen Ginsberg and Jack Kerouac just put the pages together in a manner that seemed correct, giving the novel its fragmented, surrealistic flavor. I have no idea whether or not any of that is true, but I can imagine the writing of NIGHT OF THE DEMON went more or less the same way. Because I’m here to tell you right now, Dear Reader, that nothing about this film makes sense. This is easily one of the most confused, disorientating films around.

I have friends who are writers. Most of them struggle with one aspect of the process or another. Some struggle with writing beginnings. Some struggle with the endings. Most struggle with all the stuff in between. This film feels like three aborted attempts to write a screenplay. At first, the writer thought about making a slasher film. He devised a loose story about a bunch of people being hunted in the woods. For some reason, he gave up. Then he decided to write a script about Bigfoot. Unable to make heads or tails of this new idea, he just dumped Bigfoot into the slasher film. Then he gave up on that one too. His final idea involved backwoods devil worshippers. Clearly, he didn’t think that one through. So what did he do? You guessed it. He dropped it into the Bigfoot slasher film and called it a day. I’m convinced that is how this mongrel came into existence. It’s almost inconceivable to think it could have been a product of anything other than desperation and incompetence.

The police are interrogating an anthropology professor named Bill Nugent. He was found in the woods, his face covered in third degree burns. Despite his injuries, he is able to tell the police all about his terrible week in the woods. Turns out Bill and a half dozen of his students were trekking through the forest in an attempt to prove the existence of Bigfoot, a monster allegedly responsible for mutilating a whole slew of people over the past decade. They learn of the town nutjob, a lady known only as Crazy Wanda that lives deep in the woods. Thinking she may have some insight into the beast, they set off to find her. Before you can say “bad idea”, things start going south. Their boat goes missing (along with all their ammunition), Crazy Wanda refuses to speak to them, they stumble across a cult holding a black magic ceremony in the middle of the night and one of the students gets attacked by Bigfoot. Crazy Wanda eventually relents, allowing Bill and students to seek shelter in her home. When she proves unresponsive to their questioning, they hypnotize her. She finally spills the beans. When she was a teenager, she was chased out of her home by her religious wacko father. Alone and scared, Wanda was attacked and raped by Bigfoot, the assault leaving her pregnant. The father allowed Wanda to carry the baby to term and then killed it. Outraged, Wanda burned her father to death. Now she lives alone in the woods but sometimes her attacker comes around to visit her in the night. Unfortunately for Bill and Company, tonight is one of those nights. Bigfoot shows up, breaks into the house and proceeds to attack everyone in the slowest slow motion you’ve ever seen.

Now, having read that, can you explain to me why this film is called NIGHT OF THE DEMON? Have you seen the movie? If so, can you explain to me why Bigfoot acts like Jason Voorhees? Seriously, he actually uses an axe to kill a person, picks up a guy in a sleeping bag and throws him against a tree, (basically) stabs two girl scouts to death and understands human anatomy well enough to know that dragging a guy’s jugular across a broken windowpane will cause a quick death. He doesn’t act like some kind of wild beast. He acts like a slasher film killer. At one point, our *ahem* heroes open a door to find their friend’s dead body tied up in the doorway. WHERE THE FUCK DID BIGFOOT LEARN TO TIE KNOTS?!? But to extend the stupidity to the human characters, why in the holy mother of fuck would you leave all your ammunition on a boat while hunting a monster you believe to have killed a dozen people over the past ten years? Wouldn’t you take precautions? Wouldn’t you give a second thought to stealing off in the middle of the night to fuck your girlfriend? I can forgive a lot of stupidity in a film like this (ie. all the students are in their mid-thirties, all of these anthropology students think anecdotes are evidence, all of the characters respond to strange noises by going towards them) but when all the idiotic shit is constantly flying right at you at 100 miles per hour, it becomes harder to avoid and a helluva lot harder to excuse.

And then there’s the narrative devices used. It’s bad enough that the film is told in flashback, thus ruining any surprise the ending might have held, but the film constantly utilizes MORE flashbacks. Every ten minutes, the professor tells a story about how Bigfoot mangled some dip shit. Essentially, every ten minutes, we get treated to a slasher film set piece. In the first, someone gets their arm ripped off. In the second, a man is attacked mid-coitus, his mortally wounded body slowly sliding down the windshield of a van while his half-naked girlfriend overacts wildly. A man is axed a couple of times and some biker has his dick ripped off (and yes, you do get to see a Bigfoot hand grasp an actor’s actual dick). I mentioned above that Bigfoot basically stabs two girl scouts to death. That scene is one of the worst in the entire film. For some reason, two girl scouts are out in the woods carrying knives. When Bigfoot finds them, he grabs them by their wrists. He then spends the next four minutes slamming them together, their knives carving each other up. Why they didn’t just drop the fucking knives is beyond me.

So OK, we have flashbacks inside a flashback. But wait, that’s not all. When the group tracks down Crazy Wanda and (inexplicably) hypnotizes her, we get another flashback, which moves into a flashback inside a flashback. So we have a flashback in a flashback of a flashback in another flashback…  That’s some Christopher Nolan shit right there. Unfortunately, no one bothers to ask her why she was lying on the altar during the black magic ritual we saw earlier on. Oh, did you forget about that? Well, so did the filmmakers as we clearly see in that scene that everyone involved is from the town, including the cops. So why are the cops even bothering to interrogate the professor at the beginning of the film if they already know what happened?

I could go on and on but honestly, what’s the point? You should already be able to tell that this is not a film worthy of your time. I only watched NIGHT OF THE DEMON because of its place on the DPP Video Nasties list. That list contains some of the worst horror films of the 1980s, films like ANTHROPOPHAGOUS, NIGHT OF THE BLOODY APES and DON’T GO IN THE WOODS. This film puts them all to shame. I can say, without a moment’s hesitation, that this is, unquestionably, the worst film on that list.

Posted by David Grant at 11:35:00 PM
Email ThisBlogThis!Share to TwitterShare to FacebookShare to Pinterest
Labels: Bigfoot, Night of the Demon, Video Nasty