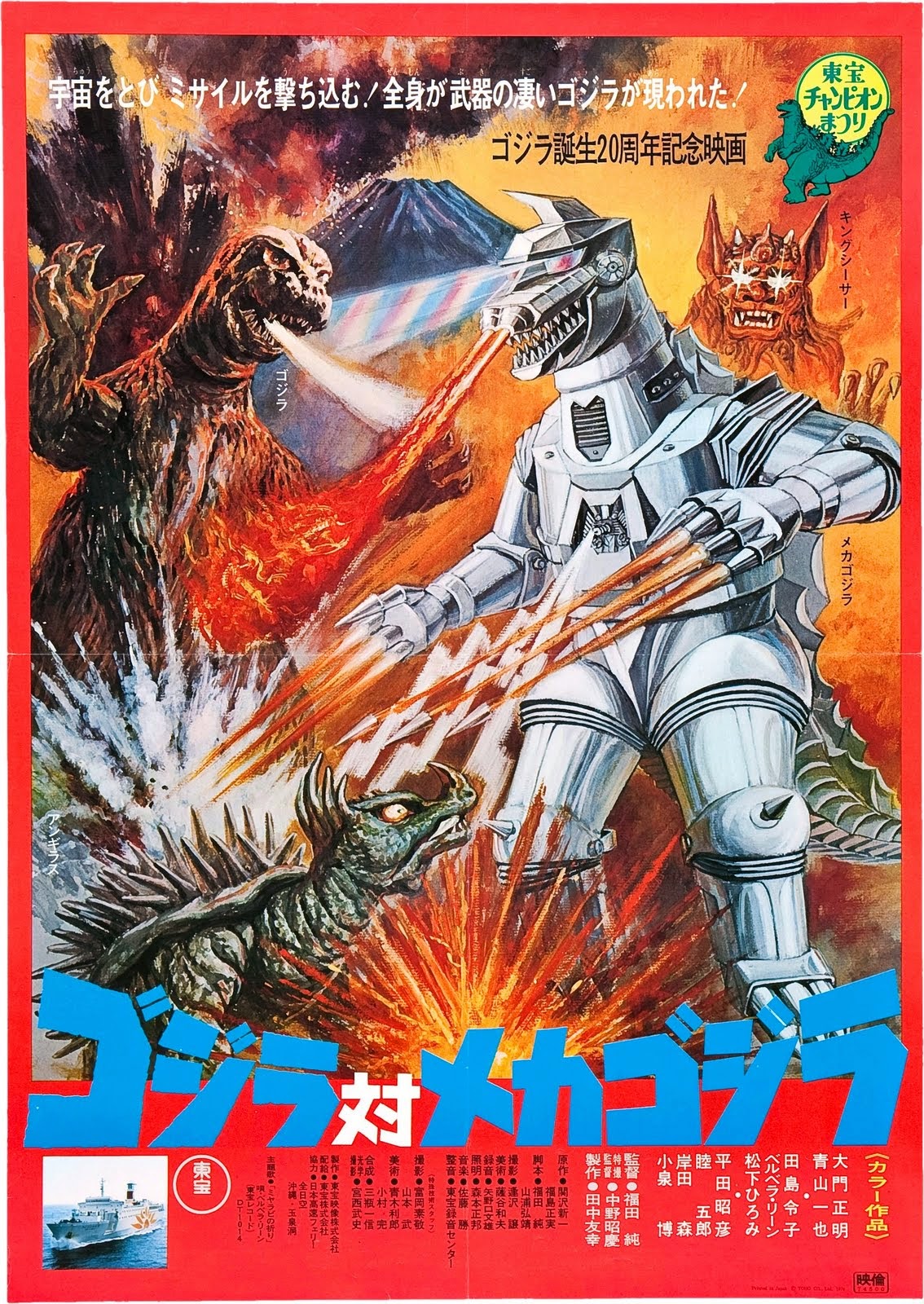 Over the span of two decades, Godzilla had gone from a destructive, mindless beast to a defender of the Earth. This change of tone from a metaphor for nuclear annihilation to a child friendly monster wrestler didn’t sit well with audiences who grew up with the King of the Monsters and the box office reflected that. The previous five Godzilla films underperformed at the box office, each new entry pushing the once lucrative franchise closer to retirement. The production quality surely had something to do with it. Alongside the drastic shift in narrative tone, the films became cheaper and cheaper. The recycling of monster battle footage from film to film and the move from metropolitan areas to large open fields of nothing made each successive film a little bit less exciting than the last. But for Godzilla’s 20th anniversary, longtime franchise producer Tomoyuki Tanaka decided to pull out all the stops. The budget was raised significantly and work on the screenplay began well before usual.

The project began life as GODZILLA VS REDMOON. In this unused script, Godzilla would face off against two new monsters, Redmoon and Erabus, both from the lunar surface, and the action would take place in scenic Okinawa. It was reportedly an ambitious project with more monster action than the previous four films combined. Unfortunately, creative disagreements caused the script to go through a dramatic rewrite. Everything but the setting was tossed out. The now familiar “aliens invading the Earth” narrative was adopted and Redmoon and Erabus were replaced with Mothra and Garugan, a mechanical monster not too dissimilar from the robo-gorilla of Toho’s KING KONG ESCAPES. A further rewrite removed Mothra from the film, replacing the fan favorite with King Barugan (not to be confused with Barugon from the GAMERA series or Toho’s own Baragon). The final rewrite of the film changed King Barugan into King Cesar (or King Caesar or King Seesar or whatever different way of spelling the name appears on your print of the film) and added an appearance by series regular Anguirus. With the screenplay finished, Tanaka hired Jun Fukuda to direct the film and brought in special effects technician Teruyoshi Nakano to supply the films glorious effects work. After a reasonably short production time, Toho rolled out GODZILLA VS MECHAGODZILLA into theaters in March of 1974.

One of the busier narratives of the Godzilla franchise, GODZILLA VS MECHAGODZILLA begins with the strange discoveries of a piece of metal, which turns out to be space titanium(?), and a series of ancient drawings inside a cave. Inside the cave, an archeologist named Keisuke finds a mysterious statue resembling a Shisa, an mythical Okinawan ward against evil spirits. He travels back to Okinawa with a beautiful young archeology student named Saeko. Meanwhile, Keisuke’s brother Masahiko, a professor named Miyajima (played by Akihiko Hirata, the actor who portrayed Serizawa in the original GOJIRA) and the professor’s daughter Ikuko are kidnapped while exploring the area where the space titanium was found. Their kidnappers are space gorillas disguised as humans. They are from, and I quote, “the Third Planet of the Black Hole, Outer Space” and are planning to take over the Earth. How will they accomplish that?

Well, while all of that was going on, Godzilla – or rather what appears on the surface to be Godzilla – started a devastating rampage near Mount Fuji. The rampaging beast has a nasty scuffle with Anguirus. During the brawl, a part of his flesh is torn off, revealing a patch of metal underneath. Once the imposter Godzilla has dispatched Anguirus using King Kong’s signature jaw breaking finishing move, it continues its path of destruction only to come face-to-face with the real King of the Monsters. During their throwdown, Godzilla blasts his doppelganger with his nuclear breath, forcing his adversary to reveal his real form, a towering metal Godzilla equipped with more explosive ballistics than a fleet of battleships. Godzilla goes toe to toe with Mechagodzilla and the two end up badly damaging one another. Mechagodzilla is rendered nearly non-operational. Godzilla, terribly wounded, retreats back to the sea. Licking his wounds, Godzilla emerges on an island during a thunderstorm. Adding insult to his considerably injuries, the big guy ends up being struck by a couple dozen bolts of lightning.

And while all of that was going on, Keisuke and Saeko managed to dodge an attack by a space gorilla assassin with the help of an undercover Interpol agent named Nanbara. We also learn that the statue they’re transporting to an Okinawan temple is the key to an ancient prophecy that seems to be coming true. While they continue their travels, Masahiko, Miyajima and Ikuko are terrorized by the space gorillas in their underground base. The leader of the alien army forces Miyajima to repair Mechagodzilla and then rewards his assistance by throwing all three of the captives into a giant steam bath where they will slowly cook to death. Having arrived in Okinawa, Keisuke meets Nanbara and the two head off to rescue his brother. They manage to free the hostages and escape the alien base. The group finally together, they (naturally) decide to split up again with Nanbara, Miyajima and Masahiko returning to the alien base to destroy it.

Now while of that is going on, Keisuke, Saeko and Ikuko head off to an Okinawan temple where a priestess and her elderly grandfather begin the necessary steps to awaken King Cesar from his resting place in the side of a mountain. They place the Shisa statue back where it should be and the priestess awakens King Cesar (by singing a pop tune to it, obviously). With a grand explosion, King Cesar awakens just in time to fight the returning Mechagodzilla. At first it looks like King Cesar has met his match but then up pops Godzilla, all healed up and looking for a fight.

The ridiculous narrative of GODZILLA VS MECHAGODZILLA keeps the film moving forward at a breakneck pace. Sure, it’s convoluted and overly busy but it has the swerve and swagger of a good Saturday morning Euro-spy film. From the over-the-top villain locking his captives in an early James Bond-style torture chamber to all the secret agents and bright, sunny scenery, the film has a delicious cartoon quality to it. In any other movie, the bad guys frame dissolving into ape men would have been a turn-off of massive proportions, but here it works, adding to the fever pitch delirium. In fact, the human-based portions of the narrative are so damn enjoyable that I kind of forgot all about Godzilla. I just wanted to see what kind of ridiculous cliff hanger the film would throw at me next.
But this IS a Godzilla film and pound for pound GODZILLA VS MECHAGODZILLA makes up for the past four or five films during its fight sequences. Watching Godzilla go at it with his metallic adversary is a sight to behold. Decked out with a seemingly endless supply of missiles (not to mention a chest laser, a force field generator and rockets built into its feet for flight), Mechagodzilla supplies more explosions and screen shaking eruptions of fiery fury than the entire Schwarzenegger oeuvre combined. Godzilla films always withheld the most spectacular fights until the final reel and this film is no exception. The threeway showdown is simply amazing and features one of the most memorable finishing moves of the entire franchise. Toho set out to recapture the past glory of the franchise with this film and you know what? They absolutely did. From the first minute to the last, GODZILLA VS MECHAGODZILLA is a total blast, a real rollicking action/sci-fi hybrid that reminds you of just how much fun Japanese kaiju insanity can be if done right.

As interesting as the film is, what happened when it was snatched up for US release is even more interesting. GODZILLA VS MECHAGODZILLA was picked up for distribution in the mid 1970s by Cinema Shares International, an on-the-cheap distribution firm with an eye on quick and easy entertainment. After the usual censorship treatment so the film could get a G rating, the name was changed to GODZILLA VS THE BIONIC MONSTER. Surprisingly, Cinema Shares International was met with threats of litigation from the one and only Universal Television, the TV production arm of MCA/Universal Studios, a major powerhouse. Claiming trademark violations over the use of “bionic” in the title (Universal Television was the owner of the Lindsay Wagner vehicle The Bionic Woman), Universal Television put the fear of God into Cinema Shares International, forcing them to change the name once again to GODZILLA VS THE COSMIC MONSTER. Now it isn’t uncommon for companies to claim trademark violation if they feel like another product may be confused for their own or if they feel like a competing product is trying to unfairly gain from their product, but really who the hell would have ever confused GODZILLA VS THE BIONIC MONSTER for The Bionic Woman? When would the two ever even be spoken about in the same breath? It just boggles the mind.

Coming up next, the final entry in the Showa GODZILLA series, TERROR OF MECHAGODZILLA.
Posted by David Grant at 12:59:00 AM
Email ThisBlogThis!Share to TwitterShare to FacebookShare to Pinterest
Labels: Godzilla vs Mechagodzilla, Godzilla vs the Bionic Monster, Godzilla vs the Cosmic Monster