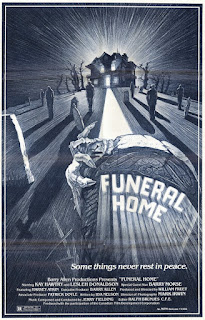 The most notable thing about FUNERAL HOME is its title, an achingly obvious horror movie title if there ever was one. You’d be forgiven for thinking that you have seen a half a dozen movies bearing that name. How it was that by 1980 we managed to have THE TEXAS CHAINSAW MASSACRE but not FUNERAL HOME is beyond my comprehension. It really, truly is a no-brainer title. Like PSYCHO or HALLOWEEN, the title FUNERAL HOME immediately tells you everything you need to know about the film. You instantaneously form an idea of the horrors contained within. Decay, embalming fluids, pasty faced corpses laid out in gaudy pine boxes… it’s both a perfect title and an underwhelming title. Nothing too flashy, nothing too original, everything is obvious, everything is routine.

That perfectly summarizes the film itself too. This was early 1980, well before the attractive, horny teenager became the de facto standard for slasher movie characters. Sure, we have Heather, the lovely, busty protagonist and Rick, her hunky boyfriend, but we’re mostly stuck with a bunch of chubby, nondescript schlubs, all of whom have their own individual plot threads, for the majority of the movie. Amid all the comings and goings of our hideous 40-somethings is Maude Chalmers, Heather’s grandmother. Left alone after her mortician husband ran off with another woman, Maude has decided to turn her home, the titular funeral home, into a bed and breakfast. This of course raises the very valid question of why anyone in their right mind would choose to spend their weekend vacations in a largely rundown, ultra creepy home in the middle of a field but hey, it’s their money and they can waste it as they wish.

Maude is your typical bitter, conservative prude, a real cantankerous old crow that is as likely to berate her customers (in particular, a sleazy traveling salesman and his horribly downmarket mistress) as she is to fix them breakfast. But of larger concern than the service is the way Maude sneaks down into the basement to have arguments with a mysterious man whom we never see. There’s also the mentally challenged handyman lurking about and because this is a 1980s horror movie, that can’t be good for anyone at the property. It doesn’t take too long before people start dying and the truth about Maude’s more anti-social tendencies come to light. Anyone paying attention to the near constant Hitchcock references will figure out the twist ending pretty quick and honestly, this is about the only thing FUNERAL HOME does really well. Unfortunately, when the best I can say about your movie is that it very cleverly references a much better movie… well, that might not be much of a compliment.

At little more than 90 minutes, FUNERAL HOME absolutely blows by. This is a film I actually watched twice in a row to see if I could figure out why a movie in which nothing much happens feels like a movie half its length. After those two viewings, I still have no idea. I don’t want to give the impression that the movie is totally without merit though. William Fruet, the director of the much more satisfying DEATH WEEKEND and the incredible KILLER PARTY, does have a considerable amount of skill. When the film decides it wants to be a slasher instead of just a low rent Hitchcock knock-off, it contains a surprising amount of punch, with more than a few stalking scenes done quite well. There’s some genuinely effective stuff in here, but it is surrounded by endless stretches of unlikable characters doing uninteresting things. Had the film been a bit more focused and a lot less obvious, it would have achieved what it set out to do. As it stands, it is just an alright, middling little horror film that doesn’t quite stand out from the pack.
Posted by David Grant at 2:51:00 PM
Email ThisBlogThis!Share to TwitterShare to FacebookShare to Pinterest
Labels: Funeral Home