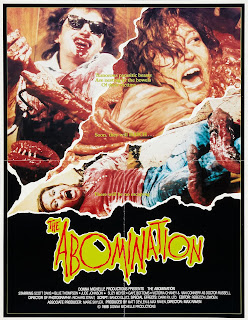 No, I didn’t just have a stroke. This is the opening 30 seconds of THE ABOMINATION, a 1986 Super 8 horror flick from Z-grade auteur Bret McCormick. This pre-credits sequence runs almost 4 minutes, offering up a synth-soaked spoiler reel for the entire film. Every death is shown, every effects gag ruined. It’s a strange way to begin a movie, that’s for sure, but in hindsight it feels rather apt for this film. Simply put, THE ABOMINATION is so strangely structured and bizarre that I’m not sure any other opening sequence could have lived up to the weirdness that follows.

The man suffering from nightmares is Cody, a 20-something guy living with his hyper-religious mother. She believes she has lung cancer, not because of an actual medical diagnosis, but because a television evangelist told her so. One day, the mother coughs up a nasty lump of… well, something. She tosses it into the garbage can and heads off to bed, believing herself cured of a malignant growth. That night, that fleshy, nasty lump squirms its way into Cody’s bedroom and slithers down his throat.

The next day, Cody becomes ill. He also hacks up something nasty, placing it under his bed. He begins to suffer fugue states, driven to kill by some unseen force. After murdering his best friend’s girl, he sticks her corpse under his bed. The next morning, the gooey lump of flesh has grown into a monster, thanks in no small part to the tasty snack Cody procured for it the day before.

From this point forward, Cody begins killing virtually everyone he comes across. His friends, the television evangelist, even his own mother, each time feeding the remains to the monster he has come to call ‘the Abomination”.

THE ABOMINATION is a little bit BASKET CASE, a little bit LITTLE SHOP OF HORRORS and a little bit SHIVERS, with a few nods to ALIEN and BRAIN DAMAGE tossed in for good measure. It’s also a little bit confusing. After the credits have rolled and the entire film has been spoiled for us, we’re treated immediately to a scene of Cody murdering a woman in a graveyard. This murder is accompanied by voice-over narration from Cody and his unseen psychologist. Apparently, what we’re witnessing is simply a dramatization of a recurring nightmare Cody has been having.

But once that sequence reaches its bloody conclusion, we flashback, again with voice-over narration, to Cody and his mother, his mother’s obsession with the evangelist, his mother coughing up the lump, the monster crawling down Cody’s throat… all that stuff. At this point, we seem to have left the dream and are now listening to (and witnessing) the events which led Cody to this point in his life.

And way down the line, near the end of the film… we see that murder in the graveyard again. So when exactly did this dream end and real life take over? Is the entire film a dream? There’s a bit of voice-narration (which completes after the end credits have rolled because whoops) which attempts to answer this question, but it conflicts with pretty much everything we’ve been told throughout the film. So it’s never entirely clear what is a dream and what is reality. That might have been a massive boner killer had this movie not been THE ABOMINATION.

Because the slip and slide between the mundane and the outrageous is what makes this film such a low grade joy to watch. It’s absurd and ridiculous, over-the-top gory and downright stupid. All of the audio in the film is post-synch, all its effects concocted from stage blood and animal offal. The titular Abomination is a massive, vagina-like puppet crammed into cabinets, stoves and toilets. It’s the kind of film you will either love or hate, chock full of amateur shocks, histrionic performances and wood chipper editing. Don’t feel like watching a man shovel pitchfork after pitchfork of real animal guts into a tentacled and fanged vagina puppet tucked inside a fake kitchen cabinet? Probably best to stay away. But if you’re like me and you love a good bit of try hard, backyard filmmaking from time to time, you might just find a lot to love here.

The use of voice-over narration was probably just an afterthought, a way to skirt the limitations of low budget filmmaking. It imposes a narrative onto a loosely connected series of scenes, most involving chainsaws and kitchen knives. Had the connective tissue of the film been shot and edited together (ie. conversations between friends, montages showing a proper passage of time, establishing shots, etc.), THE ABOMINATION might feel more like a traditional movie than a ultra-gory slice of religiously tinged monster horror (there’s quite a bit of talk about the Whore of Babylon, the book of Daniel and the inherent dangers of religion to people too weak minded to see through the false promises of divine intervention). That would have actively harmed the film, in my opinion. The scattershot nature of the story and the almost absurdist horrors it contains help to turn a low budget snoozer into a bona fide B-movie great.
Posted by David Grant at 9:43:00 PM
Email ThisBlogThis!Share to TwitterShare to FacebookShare to Pinterest
Labels: 1986, Bret McCormick, Horror, Monster movie, Super 8, The Abomination