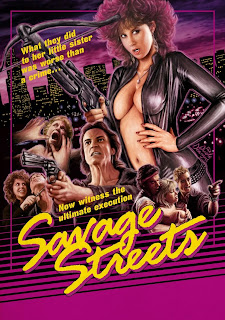 Hello! Welcome to my blog! I talk about all kinds of things here, mostly horror and science fiction films. As of late, I’ve been trying to balance my screenwriting and obsessive video game playing with movie watching. While I can’t say I’ve been all that successful with my time management, I did watch a few movies this weekend. So here, pull up a seat and let’s talk about rape.

What? Was that too sudden? Are you a little bit surprised by the nonchalant way I just brought up a very sensitive, very disturbing topic? Good. Now you know how I feel whenever I watch an exploitation film.

Rape is a bog-standard narrative device in exploitation films. Hell, European genre cinema doles out rape with all the mindless, self-serving glee of a Republican politician handing out tax cuts to giant corporations. Finding an exploitation film that doesn’t contain rape is like winning the lottery, and while I’m not oblivious to the potential narrative usages of rape (or the startling morality plays that sometimes result from it) I do often wonder whether or not screenwriters actually feel any outrage over the crime of rape. It’s used so frequently and with such reckless abandon that it’s simply become a lazy plot point, one step down the ladder from “they kidnapped my kid” but one step up from “they shot my dog”.

In fact, most of the rapes carried out in these movies are not seen as “crimes against victims”. In most cases, the rape of a female character is done as a protagonist provocation. It is not a crime against the woman. It’s a crime against the man who is dating or married to the woman. Worse, it’s usually done as a form of punishment, no different from scratching someone’s car because they cut you off on the way into the grocery store parking lot. At best, this is simple (but unforgivable) narrative reductionism. At worst, it’s just another example of territorial masculinity, the idea that women are property of men and therefore rape is tantamount to property damage, again like scratching someone’s car.

In the case of SAVAGE STREETS, a mid-80s action film about Linda Blair taking on and taking down the group of hyper-masculine dope dealers that raped her deaf-mute sister, the “women as property” angle doesn’t really come into play. In fact, the rape presented in the film is not really of any consequence at all. Although Blair’s character Brenda loves her sister (we know this because the writers have her say it a dozen times), it isn’t the rape of her sister that acts as the instigation point for the revenge side of the film. That, Dear Reader, would be the murder of Brenda’s friend Francine, who is tossed unceremoniously off the side of an overpass to her death by our group of thugs. So what exactly is the point of even subjecting the sweet, innocent Heather to a nasty bout of gang rape?

Simple audience provocation. That’s the answer. And I have a problem with that answer. In fact, I think most people should, even if what we are really talking about here are just exploitation movies.

Rape-revenge films (and yes, to an extent I think SAVAGE STREETS is one of them) usually masquerade as female empowerment fantasies, allowing their female characters to act as knife-wielding boomerangs bringing the force of sexual/power dominance smashing back into the faces of brutish men. And I would say that many rape-revenge films do this sort of thing quite well. For all its acting flaws, I SPIT ON YOUR GRAVE (the original, that is) stands up very well as a feminist exploitation film. So does MS. 45 and DEATH WEEKEND. Sadly, SAVAGE STREETS, despite its female empowerment attitude, doesn’t quite seem to get its own message (or maybe I’m just wrong for thinking the film ever had an intended message in the first place).  The film rockets back and forth between moments of characterization and overt objectification. One minute Brenda is treated as a character, the next she’s catfighting in the shower, her thin white shirt soaked through so we can all finally see what her boobies look like. When Brenda finally completes her metamorphosis into leather clad avenging angel, her role as dominant woman should be cemented. Unfortunately, it’s difficult to scream “grrl power!” when your bad ass female protagonist cowers in fear whenever the man she just shot twice and stabbed once so much as grits his teeth in her direction.

Leaving aside my issues with the films sexual politics, gender representations and crass reductionism of serious matters for the sake of gross narrative punchlines, does SAVAGE STREETS work? No. Not really. My biggest problem with it as a simple exploitation film is that it never reaches critical mass in terms of outrage, action or animalistic titillation. It feels bored with itself, a fact never more evident than in Linda Blair’s dead-eyed, lethargic lead performance. Oddly enough, the only memorable performances are given by the actors portraying the disgusting raping, murdering thugs. They’re not given much to do but Robert Dryer, Sal Landi and Scott Mayer have enough energy between them to drag the dead weight of the tired narrative to completion.

Look, there are much better films of this sort out there. CLASS OF 1984 for example plays the same song as SAVAGE STREETS but has conviction and meaning behind it. SAVAGE STREETS, if anything, is a time waster, a film that unfolds at a leisurely pace, does a few offensive things, flashes a few tits and then fades from memory minutes after the credits roll. It isn’t a classic. It isn’t even a runner-up. It’s an exploitation film, one of tens of thousands, and nothing more.
Posted by David Grant at 1:27:00 AM
Email ThisBlogThis!Share to TwitterShare to FacebookShare to Pinterest
Labels: exploitation, Rape-Revenge, Savage Streets