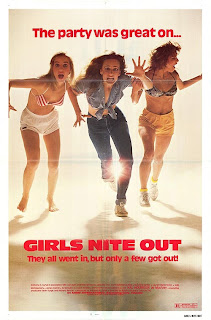 We open in the Weston Hill Sanitarium, a medical facility where they give every inmate a telephone and never bother to lock the room doors. A nurse gets beeped by a particularly incessant inmate. When she enters the room, she finds the man dead. But let’s not dwell too long on that because there’s a kick ass, high octane basketball game going on at a local college. Despite personal drama, the meaty men’s home team comes roaring back and wins. Hooray! Time to party down!

Well, not just yet. First we have to meet our gang of students. There’s Teddy, the dreamboat team captain and his best friend, Pete (also known by his nickname, “Maniac”). Pete is down in the dumps. He was kicked to the curb by his girlfriend Leslie. Leslie is good friends with Teddy’s main squeeze Lynn and Sheila, a fellow cheerleader who has recently dumped intense, possessive Mike for Benson, the team’s mascot. We also meet a half dozen other characters but for the life of me I can’t remember their names, sexual partners or what they looked like sooooooo

At a costume party, Teddy meets Dawn, a pretty blonde dating a well-off douche named something or another. While at the party, Mike threatens Sheila, calls all women “whores” and storms off. Meanwhile some radio DJ, who apparently only has one record to play over the air (Lovin Spoonful’s “Do You Believe in Magic?”, in case you’re curious), reads out clues for some major scavenger hunt happening on campus, an activity only two people seem to be taking part in. We also learn about Dickie Cavanaugh, an ex-student that went crazy, murdered the security guard’s daughter and is now residing behind an unlocked door in the Weston Hill Sanitarium. Or is he?

Sure as flies on shit, soon enough someone bludgeons two students to death with a shovel and stabs poor Benson to death. The killer fashions himself (or herself) a nice, new weapon to go along with his (or her) new disguise, Benson’s big, brown bear mascot costume, and begins randomly killing random people at random times, all the while calling into the radio station to tell the DJ that he (or she) has killed again.

GIRLS NITE OUT, the most deceptive title since STUFF STEPHANIE IN THE INCINERATOR, was made in 1982. I mention that because the slasher film formula was well established by then. Say what you will about films that follow formula, but the strict adherence to a very particular narrative structure usually keeps most films moving along at a decent clip. GIRLS NITE OUT however feels like it has no internal structure. In fact, it is almost unbearably scatterbrained. Characters disappear from the screen for 20 to 40 minutes at a time, relationships between the characters change constantly and individual motivations are dropped scene from scene. The slasher action doesn’t kick in until about the 45 minute mark and when it finally does, the film just whips through a few murders, stops for some prolonged and completely unnecessary *ahem* character development and then resumes in a frenzy. It just feels off.

And I mean off. There are things here that simply don’t make any sense. The scavenger hunt includes a clue that requires girls to break into the school. At one point, two characters drive by on a motorcycle screaming nonsense for 30 seconds before crashing their bike off-screen. There’s an attempt at romance involving a guy farting under the covers. The big shocking reveal in the film revolves around an event we saw happen in the first five minutes. We have a long interrogation scene between two cops and various characters which was clearly shot at different times. The two cops are obviously not in the same room, no one’s eye line matches and the dialogue in the scenes is so obvious in its exposition that I’m convinced it was written just so people could make some sense of all the convoluted nonsense that came before it. The final big action scene involves a guy racing against time to save the woman he’s cheating on his girlfriend with from the killer. I mean, that alone is odd enough.

But for all my complaints, there are still things I liked about GIRLS NITE OUT. I liked the way the film sometimes subverted my expectations. For example, the film contains the typical locker room scenes, only here it’s topless men standing around talking about their feelings cross-cut with scenes inside the girl’s locker room, all the hot cheerleaders standing around fully clothed and discussing the joys of screwing around. Because the story and character motivations were all over the place, the film became somewhat unpredictable. I literally had no idea what the hell this film would throw at me at any given moment. I liked some of the subtle hinting at the film’s final reveal, from a certain secondary character’s name to an impression of a famous movie scene that a character does for a cheap laugh. The attempt to create red herrings is admittedly poor but I can’t help but marvel at the juvenile audacity of the attempts. I mean, the maniac killer in a bear costume… could it be the guy with the nickname Maniac? Or maybe the guy named Teddy? Hmm. Silly shit for sure but I couldn’t help but be amused.

Honestly, I have a really hard time hating GIRLS NITE OUT. I know it’s bad, or at the very least really, really not good, but it’s just so incredibly harmless and corny that I can’t really fault it for not being HALLOWEEN. It exists in that second tier of slasher films, nowhere near as good as something like MY BLOODY VALENTINE but not nearly as pain inducing as NEW YEAR’S EVIL. While it would have been much, much better on cable television with every-10-minutes Rhonda Shear intermissions and the usual spate of telephone sex line commercials, it’s still not a completely awful way to spend 90 minutes, even if you can probably think of much, much better films to fill that time with.
Posted by David Grant at 1:09:00 AM
Email ThisBlogThis!Share to TwitterShare to FacebookShare to Pinterest
Labels: Girls Nite Out, Horror, slasher