(THE HOUSE ON) SORORITY ROW 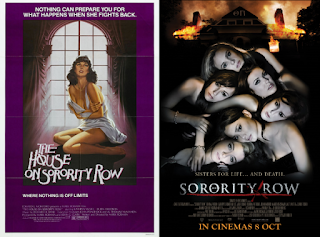 Mark Rosen’s 1983 slasher THE HOUSE ON SORORITY ROW begins with the now familiar Past Trauma. A woman named Dorothy undergoes a difficult delivery. Once the child has been born, her doctor, Nelson Beck, delivers the bad news. There was, as is always the case, complications. Years and years later, Dorothy, now simply called Mrs. Slater, is the house mother of your typical 1980s b-movie sorority. Seven sorority sisters are hoping to celebrate their graduation by throwing a party, something their crabby house mother refuses to let happen. Angry after being interrupted mid-coitus by Mrs. Slater and her sharp-nosed cane, one of the sisters, Vicki, proposes a good ol’ sorority prank, one that involves the dirty sorority swimming pool and a handgun loaded with blanks. Naturally, the prank doesn’t go as planned. One of those blanks turns out to be the real deal and Mrs. Slater ends up floating dead in the pool. Fearing jail time, Vicki and her sisters, including Final Girl Katey, decide to wrap the corpse in towels and sink it in the pool, but before you can say DIABOLIQUE, the body goes missing. And so does one of their sisters. And then another. And another until someone finally puts two and two together and realizes that they’re being stalked by a mysterious killer.

1983 was rather late in the slasher cycle. Three years after hitting the mainstream with FRIDAY THE 13TH, the slasher film had become completely stale and routine. By now, the only difference between the films was the frequency of murder and the clothed/unclothed ratio of actress screen time. Most of the slasher films released only played a few weekends, some only in drive-ins, and then disappeared. THE HOUSE ON SORORITY ROW was not one of those films. It did reasonably well at the box office and actually managed to receive a few (relative to the norm, of course) decent reviews. So why isn’t it very well known these days?

I think the answer is that THE HOUSE ON SORORITY ROW isn’t your usual blood n’ tits slasher film. There’s a genuine level of visual sophistication here with a script that never dives into the usual waters of camp. This is a suspense first kind of slasher, one that borrows liberally from superior hack and slash chillers like HALLOWEEN and BLACK CHRISTMAS (in fact, Harley Jane Kozak’s character Diane seems purposefully modeled after Margot Kidder’s Barbara, and at least one of the quick killer reveals directly references Bob Clark’s reveal of the psychopathic Billy). Even the throwaway whodunit? angle is treated with a bit more care here. Throughout the entire film, Rosen misdirects the viewer, leading us to believe that Mrs. Slater lost her child during the delivery and is now suffering the side effects of the radical (and untested) fertility treatments she underwent all those years back. Only the child isn’t dead. Eric is alive and well, living in the attic, hideously deformed and deranged from the drugs that aided his conception. When the good Doctor Beck finally arrives on the scene, he is anxious to take Eric alive, if only to shield himself from the repercussions of unethical fertility experimentation on Mrs. Slater. He drugs poor Katey and attempts to use her as bait. This leads to a brilliantly devised suspense sequence with Katey suffering some Lynchian hallucinations and visions, replete with Bava-esque lighting schemes, as she tries to distance herself from Eric, all culminating in a truly nail biting confrontation in a dark attic, Eric dressed from head to toe in a jester’s costume.

The film’s ending was re-shot and re-edited to something much more like BLACK CHRISTMAS, with both our Final Girl and killer potentially alive and well. This was the usual way of doing things in the 1980s, a decade where any lousy film could spawn ten or more lousy sequels. But a sequel never came and honestly, I’m happy with that outcome. THE HOUSE ON SORORITY ROW now exists as a really decent one-off film, like the aforementioned BLACK CHRISTMAS or MY BLOODY VALENTINE. I mean, we were certainly not suffering from a shortage of Sorority House Massacres at the time and really, I don’t know where Rosen could have gone with a sequel. Everything that needed to be done was done the first time around, and it was done incredibly well, despite a few performances that barely reach the high school drama department level.

But lo and behold, there’s a remake.

I put off watching Stewart Handler’s 2009 remake, SORORITY ROW, because I knew that everything I loved about the original would be carved out and replaced by the usual mainstream horseshit. And man oh man, were my fears confirmed within the first five minutes. Here we have five sorority sisters, all of whom are either sociopathic or just remarkably shit human beings. The Prank Gone Awry this time is a double dip of nastiness. After one of their sisters, Megan, realizes her boyfriend is cheating on her, the sisters give the boyfriend date rape drugs to use on Megan. So while the boyfriend is trying to have sex with the supposedly drugged Megan, the five sisters gleefully watch on their computer as the second phase of the prank goes into motion. Megan begins to choke and the boyfriend panics. When the sisters come to help, they find Megan “dead”. That’s right, we’ve moved from LOL date rape to LOL you killed your girlfriend. Because they might still have a shred of ethics and morals left to get rid of, they decide to take the prank even one step further, transporting Megan’s “dead body” to a secluded lake so they can, I shit you not, dismember her. The boyfriend, understandably panicked, decides to ram a tire iron through Megan’s chest (because apparently air in the lungs is what makes dead bodies float), killing her for real.

At this point, you would think someone would finally grow something resembling humanity and sure enough, Cassidy steps forward, wanting to call the police. But nope, Jessica, the alpha sister of the group, is dating the son of a Senator and doesn’t want her future prospects ruined, so the girls decide to blackmail Cassidy into silence and toss Megan’s body (and the tire iron) down a convenient mine shaft. An unspecified amount of time later, the five sisters, one of whom, Elle, is perpetually on the brink of a mental breakdown, are graduating and you know what that means, right? Of course you do. It’s time to throw one of those parties that only ever happen in the movies, a riotous bash featuring topless Penthouse pets, a Jacuzzi filled with bubble bath in the front yard, and enough kids to fill three college campuses. And amid all this idiocy is the killer, a hooded dude or dudette with a fancy tire iron rigged with knife blades, spikes and hooks, all the better to decimate absolutely everyone but the five sisters involved in Megan’s accidental death. Seriously, the killer spends more time killing random nobodies than he/she does main characters.

And of course no one notices this until the Someone Who Knows What They Did Last Summer starts sending text messages, threatening to call the police unless they meet him (or her) at the scene of the crime. When the girls arrive, they find Megan’s ex-boyfriend (and killer) all drunk and suicidal, having cut his wrists. He still has the strength to verbally assault our five *ahem* heroines so naturally they run him over a bunch of times with their car and return home to an empty house. From this point on, the movie ditches it’s already thin credibility completely, with everything from a massive house fire to Carrie Fisher shooting the place up with a shotgun splashing all over the screen. The final reveal (and you can consider this my attempt to help you not waste your time) is of course a total joke. The killer is not the Senator’s son, Megan’s kinda-sorta slutty younger sister or even Megan herself (the film keeps bringing up this possibility even though she had a fucking tire iron driven through her heart). It’s Cassidy’s boyfriend, the college valedictorian we’ve seen three times the whole movie and has had maybe ten lines.

If it isn’t obvious from the missing three words in the title, SORORITY ROW is less than half the movie Rosen’s film was. It’s a middling, half-assed slasher film that wouldn’t have felt out of place during the hey, let’s make a SCREAM rip-off late 1990s. It’s one of those movies that confuses attitude with characterization, giving us five leads with absolutely no semblance of personality. The only time the film isn’t jump cutting all over the place to the beat of loud, horrible pop music is during the suspense sequences and that would be a gift if it weren’t for the fact that the film repeatedly telegraphs its scares. It does have all the gratuitous nudity and bloodletting that the slasher films of the 1980s had, but it has absolutely no charm, wit or sense of fun to it. It’s a mental battering ram, slamming you in the forehead over and over again with its bloated idiocy, ramming its flashy, attention deficit disorder visuals into your eyes, beating you about the face with its tired, pathetic narrative. It’s a terrible, unholy mess of a film, the kind of slasher that would have found an audience back in the 80s but has no business even existing today.

Like Rosen’s original, the final shot of SORORITY ROW promises a sequel and I hope beyond hope that, like its forebear, a sequel never materializes.

Posted by David Grant at 2:24:00 PM
Email ThisBlogThis!Share to TwitterShare to FacebookShare to Pinterest
Labels: slasher, Sorority Row, The House on Sorority Row