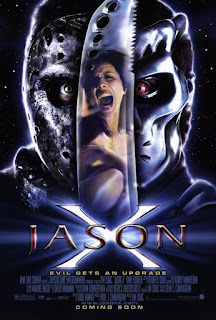 JASON X, which should have been called FRIDAY THE 13TH, PART 10: JASON TAKES SPACE, is a stupid movie. I know, right? I can't believe it either!

Why the hell is this movie so damn fun to watch while the rest of the series (with a few exceptions) is just a plodding, dull, uninteresting slog to get through? Well, sit back, folks, and read along as I try to figure that out for myself.

So what happens in this incredibly stupid movie? It starts in the year 2010 at the Crystal Lake Research Lab, a military-science-whatever research facility in desperate need of some overhead lights. Rowan, the gorgeous head of the lab (who must be suffering from terrible eye strain after spending her days working in a research laboratory lit by what appears to be a single florescent lighting fixture), is told by a military scientist that they will be transferring the “specimen” to yet another research lab in Scranton for further tests. What specimen is this? Why, it's Jason Voorhees, of course. Jason is chilling inside a dark room with about a billion open doors leading out of it, wrapped up in chains everyone knows he can break, but that's fine as he'll NEVER be able to take out the single 19 year old security guard tasked with keeping an eye on him, right?

Wrong. Jason breaks free, kills a whole bunch of people (including David Cronenberg), and chases Rowan downstairs into the cryogenic storage room. Rowan manages to force Jason inside a freezing chamber and flips the switch. Unfortunately for Rowan, Jason's machete is made out of Adamantium so he's able to stab her in the stomach through the 20-inch thick steel door of his cryo-tube. They both freeze to death. The end.

Four centuries later, a group of students (along with their professor and an android who, for some reason, still needs to wear a ventilation mask even though she's a goddamn robot) discover the cryogenic chamber. And though we the audience are shocked to find out that no one ever bothered to go back inside this state of the art research facility in the 400+ years since 2010, the students are shocked to discover a perfectly preserved Rowan and a nice Jasonsicle inside the cryo-tube. They take both of them back to their research vessel, the Grendel. While a Bridgette Wilson clone gets to work digging around in Jason's eye socket, the rest of the crew unfreeze Rowan and use nanomachines to fix the gaping wound in her gut. When she wakes up, she asks how long she's been in cryostasis. The professor tells her that the year is 2455. Rowan takes a deep breath and says “2455? That's like”… long pause as she struggles with basic subtraction… “over 400 years”. Thank you, movie, for doing that complicated math for me.

Anyway, Jason wakes up because two teens are having noisy sex down the hall. He gives the Bridgette Wilson clone a liquid nitrogen facial, kills a teen or two and then does some stalky-slashy battle with a whole platoon of space marines. After he kills 99% of them off, Jason kills the pilot, causing the Grendel to barrel straight through the space station Solaris. Even though Solaris explodes in a big ball of flames, the Grendel survives the crash with little more than a dented bumper, which means the movie can continue on. Yay!!!

Lots of “what do we do?”s later, the nerdy guy named Tsunaron (because this is a sci-fi film everyone has a name that sounds like a Peruvian sex toy; except the pilot who is just named Lou) reprograms his nippleless android girlfriend KM-14 into a killing machine. She blows the high holy fuck out of Jason and leaves his headless corpse lying in the medical bay. That turns out to be a pretty big oversight because the damaged nanomachine module comes roaring to life, reviving Jason. Only this time, he's half machine with a nice metal mask and two eyeballs for the first time since 198fuck wait… I forgot. They gave him two eyes in Part 6 even though he lost one of them in Part 4. Meh, whatever. Continuity is for pussies.

So yeah, this movie is stupid. I know, right? I can't believe it either!

JASON X was produced just so Sean Cunningham could kill some time. With nearly every unemployed screenwriter in Hollywood turning in a draft of FREDDY VS. JASON, Cunningham felt that releasing another standalone FRIDAY THE 13TH film would keep the property hot (apparently Cunningham never got the memo concerning the dismal box office returns for Part 8 and JASON GOES TO HELL) until someone at New Line picked a number out of a hat to decide on a script for their shitty crossover film. And thus JASON X was born. The initial script was written by Todd Farmer and then was subsequently rewritten by every unemployed screenwriter in Hollywood that didn't get the FREDDY VS JASON gig. Not really, but the script was under constant revision, even during production. It was a horror film, then a comedic horror film, then an action film, then a horror film, and so on and so on. The fact that this movie makes any sense whatsoever is a miracle.

It's this weirdly shifting tone that makes JASON X such a joy to watch. Because you can see the seams. You can see where the film WAS serious but is now goofy, and that conflicting tone adds a layer of genuine campiness to the entire film. It's the kind of campiness that can only come from a film made to be more serious than it actually is, like no one on screen is in on the joke. Everything about it feels contrived and forced because it is contrived and forced, but the formulaic FRIDAY THE 13TH narrative, tropes and cliches clashes against the space setting in such a way that it raises the bar for slasher inanity to such a dizzying height that you cannot help but sit there and watch it all go down with a big shit eating grin on your face. It's stupid. So very, very stupid. But like a dog that constantly runs into a glass door every time it sees a squirrel, its not the kind of stupid that raises your blood pressure. It's the kind of stupid that encourages genuine endearment. Part of me loves this stupid piece of shit film.

I would actually complain about how just stupid this film is were it not for the fact that it knows exactly how stupid it is. I would complain about how you cannot actually stem a hull breach just by shutting a door or rant about why no one ever bothered to put their dead friends into the magical nanomachine chamber that can clearly bring dead things back to life. I would complain about how the chick that gets sucked through the hole in the space ship wall would have died minutes before that ever happened due to collapsed lungs or how every gun in this movie seems to contain an infinite amount of bullets. I would complain about how KM-14 winces in pain when she falls, about how Rowan is basically a non-character even though she's the lead, or about any number of things. But why bother? This is just a stupid film.

And you know what? It's fun as fuck. Once the half hour mark hits, it's off and running with very little downtime. The kills are gnarly, none of the characters are annoying, the sets look great (even though the CGI doesn't), Jason looks good both before and after his Terminator makeover, and the whole thing feels leaps and bounds above your typical franchise entry in terms of overall quality. It's self aware, self referential, focused on being entertaining rather than self important (none of the abused child back story bullshit from 7 and 8 is here) and it's just carried off with a kind of easygoing swagger that I appreciate. It's a Saturday morning cartoon. It's a high concept slash-a-thon that manages to be bloody and gory without being mean spirited. It manages to operate as both a B movie sci-fi flick and a bog standard slasher movie. It's ALIEN without the pretentious bullshit. It's FRIDAY THE 13TH only with a pulse. It's sugary sweet, brain rotting candy. It's Jason in space. That's pretty much all it is. It's just fun.

And stupid. Did I mention that this a stupid movie?

Unfortunately, no one at New Line Cinema gave a shit about it. JASON X finished production around the time Michael De Luca, the longtime head of the studio, was kicked to the curb. JASON X was disregarded and forgotten, sitting on a shelf for a couple of years before being dumped unceremoniously into the theaters right between THE SCORPION KING and SPIDER-MAN. It was doomed from the start. But enough time has gone by that the film has gained a small cult audience and that alone kind of baffles me. Because this IS a FRIDAY THE 13TH film. It's not much different from any other film in the franchise. It's just more fun. So why is this film not more popular among fans? Is it because of the setting? Is it because it doesn't take itself seriously? I'm asking here. That's a genuine question.

Why is a movie in which an undead zombie serial killer fights a telekinetic teenage girl, a film that was savaged by the MPAA ratings board, more popular than a balls-out action slasher with all its gory goodness intact? I really don't get it. Maybe it's just because I'm not deluded enough to think the FRIDAY THE 13TH franchise is serious filmmaking. This franchise needed a counterpoint to all the gritty shit and mean spirited nastiness of the early 80s franchise entries and JASON X delivered that counterpoint. Moreover, it did it without pandering to the SCREAM crowd. It takes everything that makes a FRIDAY THE 13TH film a FRIDAY THE 13TH film and celebrates it. JASON X isn't a good film. It isn't even a passable film. But it has a real sense of jubilation to it, an energy behind it, a sense of appreciation for the foundations of the franchise. It doesn't attempt to be serious. It attempts to be fun and spooky and amusing. When the credits roll on this film, I'm 8 years old again, sitting on the couch after watching a FRIDAY THE 13TH film, happy as can be that I just watched a handful of people die at the hands of a mute mongoloid in a hockey mask. My world wasn't blown, my consciousness was not expanded. But I had fun.

And JASON X is fun.
Posted by David Grant at 12:59:00 AM
Email ThisBlogThis!Share to TwitterShare to FacebookShare to Pinterest
Labels: Friday the 13th, Jason X, Slasher film