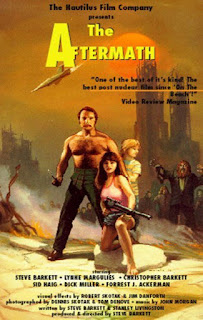 At the 20 minute mark, my mind began to wander. I thought about alphabetizing the stacks of VHS tapes sitting beside my desk. I noticed a wispy, torn cobweb in the corner of the room and decided that I need to clean this week. I thought about hitting up Amazon real quick to buy an Edgar Wallace compilation. Or maybe I could get one from the local used book store? Do I have any clean socks left or will I have to do laundry? I thought about making toast.

I finally settled on clipping my toe nails, a quick bit of personal hygiene that could be done with one eye on my tootsers and the other on my computer monitor. Once I finished, I checked the remaining time on the movie. Only ten minutes had passed since I first lost interest. I sighed and sat closer, leaning into the monitor, focusing as hard as I could on the film. Before I knew it, I had reorganized my desk, filing away the odds and ends of paperwork, putting all the doodads and trinkets in the Transformers lunch box I could never bring myself to throw away over the years. No matter how hard I tried, I could not pay attention to the film for more than 10 minutes. When the movie ended, I couldn't even remember the lead character's name. So I decided to watch it again, this time paying strict, concentrated attention to my monitor. But first, I needed coffee.

Three hours later, I sat down to watch the film a second time. It was difficult but I managed. I fought a mighty fight against the urge to click the Firefox icon in my task bar. I resisted the temptation to flip through books I had no interest in three hours ago, but now seemed like the most interesting thing in the world. I committed myself, body and soul, to watching THE AFTERMATH all the way through. So what did I think of it?

NO. I will not allow myself to procrastinate in writing a review of this film. The longer I go without thinking about it, the faster it will fade from memory. Even now, I can feel it slipping away. I need to get this out now, boredom be damned.

THE AFTERMATH tells the story of Newman, played by the film's writer/director Steve Barkett, and Matthews, two astronauts who return to Earth to find the place devastated by nuclear and biological warfare. After surviving an attack by mutants, Newman takes off into the city, Geiger counter in hand, to look for survivors. When a laser light show breaks out over the city, Newman seeks shelter in an old museum. There he meets an old man dying from radiation poisoning (played by the great Forrest Ackerman) and a young boy named Something or Another who is curiously NOT dying of radiation poisoning. Leaving the old man to die, Newman and the boy wander around a bit before being attacked by Sarah, a character who might as well have been named Nipples as her only real purpose in the film is to wander around in a barely there t-shirt with her high beams on. Nipples, I mean Sarah, tells Newman about Cutter, a rapist/slaver/murderer who has taken her friends captive. The three of them decide to free Sarah's friends, attacking Cutter and Co. in the dead of night. Though they manage to get away, this action has unpleasant consequences, leading Newman to go all Rambo on Cutter and his men in an overlong and wholly ridiculous bullet-filled finale.

THE AFTERMATH really only has three things working in its favor. One, the score by John Morgan. It's fantastic. Really energetic, memorable stuff. Two, the visual effects. The film is full of really great matte effects and some gooey gore, including a decapitation by shotgun blast. Three, Sid Haig. More on him in a second. Unfortunately, everything else is a total bore. An unmitigated, abysmal bore. I don't know if it was budgetary restrictions or just plain laziness, but this film is rife with scenes of Newman walking here, walking there, standing around, doing nothing much. Worse, the film employs voice-over, the ultimate indication that the producers thought their material was much more interesting than it actually turned out to be in the final edit. There are at least a dozen instances of Newman's voice-over just elaborating on the on-screen action. Newman sees a dead man in the street and the voice-over pontificates on finding a dead man in the street. Even more worse, every line of this voice-over sounds like it was ripped out of an old point and click adventure game. It's lifeless, unnecessary and completely off putting. But if it wasn't there, the film would have just been silent. It's like it never occurred to Barkett that he should just edit all the boring shit out of his movie.

Then there's Sid Haig as Cutter, the big bad of this film. Whenever Haig in on screen, THE AFTERMATH comes to life. He's an engaging actor, appropriately sleazy in the role, but the film does literally nothing with him. He shows up periodically, usually trying to rape one of the female characters, and then disappears from the film. Even when Newman – an ASTRONAUT – goes ballistic during the finale, killing everyone like he's Chow Yun-Fat, the film just leaves Cutter out of it. Instead, the big fist fight atop a building in the city is between Newman and some nameless sidekick character (who Newman shoots three goddamn times in the legs with a shotgun yet he can still manage to run around unfazed). Again, Barkett simply didn't understand what worked in his film and what didn't.

We didn't need mutants, long passages of voice-over pontification, and a glacial pace leading to a 20 minute shootout. We needed more Cutter, more confrontations between the big bads and the heroes. That alone would have elevated this film to something entertaining. But instead THE AFTERMATH is a film that leaves its inciting incident (the murder of Sarah and her friends) off screen and then ruins its action movie catharsis by never letting Cutter get his appropriate comeuppance at the hands of the man whose entire world he just destroyed. I honestly don't think Barkett understood what makes an action-revenge film good. He was trying to make something subversive and deep, but he failed miserably. THE AFTERMATH is just a boring turd of a film.