THE GIALLO PROJECT - DEATH ON THE FOURPOSTER (1964) 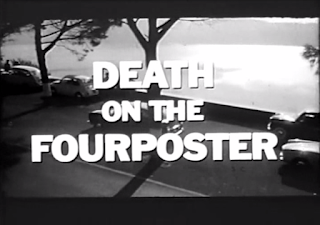 Closing out the gialli of 1964 is DEATH ON THE FOURPOSTER, another high melodrama, low impact thriller that could have been much better had it simply tried a little harder. The central narrative inspiration here is Agatha Christie's And Then There Were None, one of the most influential murder mysteries ever published. The film tells the tale of nearly a dozen characters, all spending the weekend in a secluded castle (though it looks no larger or different than a common villa) when a murder occurs. Why that murder took place and who is to blame is the main focus of the last third of the film.

It's obvious that the only thing lifted from Christie's novel is the concept and that's a shame as the film could have gone much further. Like the characters populating Soldier Island, the characters in DEATH ON THE FOURPOSTER all have secrets and squabbles. They're all flawed in some way, outright broken in others. But the film isn't interested in littering the castle with corpses. It's much more interested in setting up a slightly ironic morality tale wherein relationships, flings and attractions are revealed to be fleeting, almost indulgent nothings. It takes a group of well-off do-nothings and isolates them, lavishing screen time on their almost nonexistent moral underpinnings. No one is really a “bad person” here, but if they were, they'd all be too self absorbed to notice. In Christie's story, all the characters were revealed to be murderers, either directly or indirectly. The characters in DEATH ON THE FOURPOSTER are at worst lousy friends and at best self important idiots. In And Then There Were None, the punishment for the crimes committed by the characters is death. Here, the punishment is just a ruined weekend.

It's interesting to note that the only characters in the film given any real amount of attention are the men. The portrayals of the women are all rather simplistic. The only two female characters given any sort of depth are Catherine, the housekeeper, and Serena, the wild and sexy free spirit. Catherine and Ricky are in a relationship, but Ricky wants it kept from his friends, quite possibly because his role as a rich layabout would be diminished if he were in love with the help. Serena is an outspoken, sexually aggressive ball of energy. Within minutes of arriving, she's strutting around the place, dancing seductively and flirting with multiple men, especially Ricky, something that doesn't sit well with Catherine. Serena leads the group in a game she calls “shattering the illusion”, goading her friends into swapping partners and revealing secrets. Of all the women populating this film, she's the only one unchained by someone or something. Or so we think.

The men have more complicated personalities. One of them is an obsessive gambler. The other
has eyes for everyone other than his girl. Another is a cynical self motivated opportunist. The groundskeeper is a “feeble minded” voyeur who can't keep his hands to himself. And then there's Anthony, Serena's date for the weekend. It turns out that Anthony is a psychic. After being pressured to perform by Serena, Anthony leads the group in a séance, and that is where this long and tiring parade of squabbles, sweet nothings and flirtations takes a turn. Anthony has several premonitions. The women wearing period clothing. The men seeing themselves in a large mirror. A murder most foul. Anthony leaves in a hurry but the rest just laugh it off.

That is until Serena is found strangled to death in her bed.

This occurs roughly 55 minutes into a 91 minute film. It's also the only murder that happens during the entire running time. That should give you an idea as to what exactly this movie is concerned with. It's more interested in the minutiae of these peoples lives than the circumstances of their deaths. When you have a movie with over a dozen characters, you can imagine how little time is spent with each one individually. That creates a serious disconnect between the audience and the drama. Before the murder occurs, not a single character presents any behavior that may signal them as capable of taking a life. These people are too self absorbed, too interested in their own personal drama. Serena might rub a few guests the wrong way, but it's more of a “this person annoys me” than “I want to strangle this woman”. So the final 36 minutes of DEATH ON THE FOURPOSTER has to forcible change nearly everything about itself to accommodate this plot development.

We learn in rapid succession that Serena was pregnant, that Ricky spent time in a mental asylum, that the castle has multiple hidden passageways. We see Ricky suddenly start to hallucinate, suddenly start to drink, suddenly start to come under suspicion for a murder no one ever would have suspected him of in the first place as the film never once revealed any of his past problems to us until this very moment. Of course, it takes the cheap way out by pointing all of its fingers at the creepy groundskeeper, but it can only hold that focus for about five minutes. By the time another girl goes missing, we're firmly in “padding the narrative” territory. Characters split up, occasionally get spooked, stumble upon some passageway, toss out a few ideas on motive and then reconvene to shoot the shit or play dice. Meanwhile, Ricky is forced to take center stage as he begins, out of the clear blue sky, to think he's relapsing into madness. And because the film was never designed to support the weight of a murder mystery angle (like A GAME OF CRIME, this film feels like it was never intended to go down its mystery thriller path), it just spills the beans haphazardly by allowing a lone woman to clearly overhear a conversation the killer is having with an unknown character in the next room.

In the end, the motive for the killing boils down to money with a pinch of jealousy to spice things up. The supernatural angle explored earlier is never given any attention. Any possibility for action or intricate character moments are traded in for more talking and sitting around, and the film winds up being one of those movies where reading a detailed synopsis would suffice, if not be preferable over actually watching the film.

If there's a saving grace here, it's the direction by Jean Josipovici and Ambrogio Molteni. It's worth noting that this film is a French/Italian co-production so I'm not quite sure who directed what here, but the direction on display is handled very, very well, with some striking scenes littered throughout the film. The use of mirrors is a highlight, one that would have come in handy had the film stuck with exploring the dual natures of some of its more lively characters. There are a few fake-out scenes done entirely in-camera, like Ricky slowly approaching a woman, his back eventually obscuring our view of her, only to show him alone in the room when the camera makes a subtle move to the left. The creeping, crawling camera work and use of Dutch and low angles gives the film an interesting visual language. Whether or not it's enough to make up for its languid pacing and overly busy narrative largely depends on the viewer.
For me personally, I found myself increasingly frustrated with the film. Long stretches of underdeveloped, largely forgettable characters talking is not my idea of a good time. Had the film pared down its roster of characters and pushed the mystery angle up in the running time, I probably would have enjoyed the time I spent watching DEATH ON THE FOURPOSTER. Unfortunately, there was far too much of far too little for me to stay interested.