THE GIALLO PROJECT - LADY OF THE LAKE 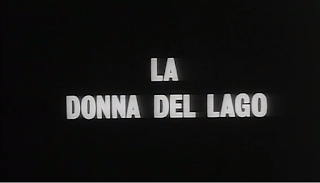 When the opening titles of a film include the names Franco Rossellini, Luigi Bazzoni and Guilio Questi, it's safe to assume that all bets are off. LADY OF THE LAKE is an almost perfect blend of three idiosyncratic sensibilities. It's a film that uses the murder mystery as an abstraction, only there to provide a semi-sturdy foundation for a house built of half-remembered narrative occurrences, subtle misdirections and dreamlike flourishes of visual imagination. There's a hefty dollop of Antonioni sloshing around in its DNA, with whiffs of the French New Wave dancing through its aiery atmosphere. It feels, in many ways, post modern yet its visuals lie somewhere in-between the chiaroscuro streets of the Film Noir and the dark hallways of the finest British Gothic horror.

It's a film that is best watched. Reading about it will only give you half the story and little of the experience. The film tells the tale of Mr. Bernard (we're never given his first name), a writer suffering from a bout of existential melancholy, who travels to a lake side hotel during the winter to work on a book. He hopes to meet up with Tilde, a pretty blonde maid he met his last time there. The lake that sits near the hotel fascinates him. We're told that beneath the waters lies the ruins of a city, though we're never given any sort of evidence to back up that claim.

Upon arriving, Bernard is greeted by Enrico, the affable hotel owner, and his daughter, Irma. Enrico's son, Mario, arrives later with his distant, clearly disturbed younger wife Adriana. But still, there's no sign of Tilde. Visiting a photographer acquaintance of his in town, Bernard learns the tragic news. Tilde is dead. She was found to have ingested poison, the death ruled a suicide by local police. But the photographer claims to know the truth. Tilde did in fact have poison in her system, but the real cause of her death came from a slit throat. He shows Bernard a photograph he took of Tilde shortly before the murder. She is obviously pregnant.

But with whose child?

As the days go on, Bernard begins investigating Tilde's death. He begins to feel ill, sporting a high fever. Or is he being poisoned, too? Was his dream of Irma confessing her guilt over Tilde's death a fevered hallucination, or did it really happen? A memory keeps haunting Bernard, a memory of Tilde making love to an unseen man during the night. Was he the one who murdered her? Is it true that Enrico might have paid off the police to keep Tilde's murder from going public? With little more than rumors, conjecture and a handful of hazy memories, Bernard seeks to stitch together the truth, even though it might lead to his own destruction.

What makes LADY OF THE LAKE such a fascinating piece of film is its main narrative convention, that of the unreliable narrator. Bernard is as much of a mystery to us as the murder of Tilde. Though he knows Enrico and his family from his years of spending summers at the hotel, they're little more than passing acquaintances. Like Hitchcock's REAR WINDOW, our entire vantage point is through the eyes of the protagonist. When you couple that with Bernard's constant fevered mind, you're left with a skewed perspective and little solid ground to stand on. Unlike your usual Amateur Detective tale, Tilde's murder happened in the past and with the town all but empty, there's no one for Bernard to question but the people he suspects. With nothing more than rumors from a man he barely knows to go on, Bernard begins to read guilt where guilt might not lie.

Simple things like a nervous laugh or a passing glance are read as indications of something sinister. With only a single memory as a clue, Bernard begins to seek patterns out of nothingness. He descends into conspiracy thinking. When he spies Adriana, Mario's mentally indisposed wife, walking near the lake at night, it becomes something more than a night time stroll. And when she attempts to pass him a note one afternoon by dropping a piece of paper out of a window, Bernard assumes she has urgent news to tell him about Tilde. After she is found drowned in the lake, what other conclusion can Bernard draw than she was murdered? As the film descends further down its complicated path, Bernard begins to come to the realization that the truth he is seeking might not be as simplistic as he hoped it would be.

It might just be that the woman whose death he is seeking to avenge, a woman he never really knew but grew to cherish through unrequited love, might not have been much of an angel after all.

And therein lies the central conceit of the film. The nature of truth. The uncertainty of memory. The desire to solve what might be unsolvable, if for no other reason than to feel the satisfaction of some kind of closure. LADY OF THE LAKE doesn't end with closure of any substantial type, but that shouldn't come as a surprise. It isn't a film concerned with tying a nice bow of poetic justice on top of a package filled with easy answers. In the end, closure is as elusive as the truth and the journey to enlightened discovery can sometimes carry a burden far greater than the weight of simply not knowing.