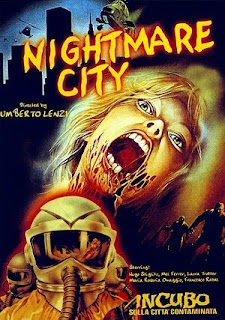 In an attempt to make ALIEN: COVENANT seem like the smartest film I watched all day, I spent 90 minutes of my evening with Umberto Lenzi's 1980 cartoony trash epic NIGHTMARE CITY. And whaddya know? It worked. Suddenly, the sheer stupidity of Ridley Scott's second-in-a-row failure looked like the scribblings of a young Stephen Hawking. And maybe that's what Scott was going for, a movie that wouldn't look like a large clusterfuck of bad ideas if you just placed it next to a lower budgeted clusterfuck of bad ideas.

But to be fair, NIGHTMARE CITY does not, unlike ALIEN: COVENANT, pretend that it is a film full of grandiose ideas. Lenzi's shocker is just a full-throated scream of random syllables, like the sound a belligerent drunk makes when you play keep away with his last bottle of Wild Turkey. It doesn't make a lick of sense, but then again it doesn't want to. An intelligent story (hell, even an intelligible story) isn't what this film wants to tell. It just wants to indulge in a long parade of bloody atrocities and bared breasts. In other words, it just wants you to have a good time.

So what exactly is NIGHTMARE CITY all about, you ask? Well, it's about a zombie outbreak. Kind of. Not really. In the same way that Danny Boyle's 28 DAYS LATER took the all zombie movie tropes but left the zombies themselves behind, Lenzi's film gives us irradiated men and women, mostly dressed in cardigans and blazers, that cut a bloody swath across an unnamed European city. Our lead character is a reporter named Dean, a rather useless chap trying to keep his doctor wife, Anna, safe from harm. There's also a military commander named Murchison and his second in command, Warren. They get to do things as well. And there's some guy named Bob. Every movie needs a guy named Bob, right?

OK, look, there isn't much of a story here. The majority of the film follows Dean and Anna as they traverse several locations, first a TV station, then a hospital, then a gas station, then a church, then an amusement park… That's about it. We periodically check in on the military and science types who all ramble on about causes, effects, possible quarantine procedures, maybe a cure. This is all stuff that really should have been cut from the film. Every time a military man or scientist steps up to the mic, the film reaches new heights of stupidity. For example, when a scientist informs Murchison that the infected people all possess “tissue regeneration”, the decorated military man asks him to dumb it down, as if that isn't quite self explanatory enough. The scientist then goes on to explain that as a result of their ability to regenerate tissue, weapons cannot destroy the infected, even though he's standing in front of an examination table adorned with the body of a clearly dead infected individual. Then he says something along the lines of “shoot 'em in the head, that'll work” even though he just got done telling us...

Yeah, this movie is dumb.

I mean, we don't need a thorough explanation for this shit. “Radiation dunnit” works fine here. I've never understood why people even bother trying to explain just what it is that's causing a zombie outbreak. Zombies are fictional creatures. Zombie viruses are fictional constructs. Any attempt to explain them using real world science isn't going to work. Honestly, neither does “radiation dunnit” as we've understood the effects of radiation poisoning for decades. If you're completely ignorant of science (and if you are, you'll probably enjoy the last two entries in the ALIEN franchise), this might sound plausible. But let's face it, it isn't. It's just dumb.

But I like Godzilla movies, damn it, so who am I to judge?

If we leave aside the ahem academics of the film, what we're left with is a damn near non-stop barrage of clumsily charming action set pieces. At times, the film looks more like a riot simulator than a not-quite-zombie flick. The irradiated individuals in NIGHTMARE CITY might have lost their ability to speak, but they sure as shit didn't lose their ability to bludgeon, strangle, stab, ax, shoot, club, throttle and beat the ever living shit out of everyone they come across. They even drive cars, set up ambushes, cut telephone lines, purposefully and sadistically torture their victims. In other words, they're total dicks, gouging out eyes and ripping open blouses with gleeful abandon. It's during these moments that NIGHTMARE CITY shines in a 'so bad it's good' kind of way. There's a scene early on involving a group of ghouls massacring a bunch of spandex-clad TV workout models that ranks pretty high on my personal “dude, what the fuck am I watching?' list. TVs explode like bombs whenever they're thrown, heads pop like balloons left and right, breasts are chopped off, an eye is sloppily ripped out with a fireplace poker… It's just an awesome parade of slapsticky gore (emphasis on 'sticky').

But Jesus H. Christ on a Sybian saddle, does it drag at times. NIGHTMARE CITY is a long, hard slog of a film to get through, mostly because the film keeps stopping to get some military bullshit out of the way. That's the stuff we don't care about. I mean, we don't exactly care about Dean or Anna either, but the entire reason we're watching a movie called NIGHTMARE CITY is to stuff our faces full of sugary, gory goodness, not listen to people talk about pseudo-scientific jargon or wax philosophic about good and evil in a world full of irradiated pricks with no respect for the personal boundaries of others. We want people getting shot in the face. We want random titties for no good reason. We want chaos, not boner killing bullshit about molecular regeneration. And when chaos is on the menu, NIGHTMARE CITY is a hell of a good time.

But yeah, it's stupid. So very, very stupid. Though I can forgive it, because unlike the other movie I watched today, it didn't try to sell me a bottle full of piss by claiming it was fine champagne.