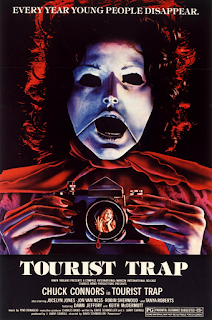 TOURIST TRAP begins with a man dodging telekinetically thrown bottles and doo-dads while a roomful of mannequins chuckle and scream at him. And then the film gets weird. Really weird. David Schmoeller's directorial debut is a jumble of horror movie influences, most notably CARRIE and HOUSE OF WAX. It's a kitchen sink kind of film, with all its bit and pieces tossed haphazardly together. The fact that the film doesn't collapse within the first ten minutes is a minor miracle.

The unfortunate fella we met at the start of the film is Woody. He had gone off to look for a gas station to help fix a busted tire, leaving behind his friends and girlfriend. When Woody never returns, the gang decides to make the best of it, with the girls heading off to skinny dip in a small watering hole. It's there that they meet Mr. Slausen, a kindly chap with a limp and a strange sense of humor. Slausen takes a liking to the pretty, virginal Molly. He also warns them about hanging around once night comes. After all, they have a coyote problem 'round these parts.

When the girls return to the car, their friend Jerry explains that a flat tire isn't all they have to worry about. Whatever car troubles they were having before have escalated to catastrophe. Now, the car is just flat out dead. Thankfully, Slausen makes an appearance, offering to help the group out. But in the meantime, they can hang around Slausen's roadside wax museum. As long as they don't go wandering around outside, that is. Especially off limits is the house behind the museum. That's where Slausen's brother Davey lives and Davey… Well, he doesn't like to be bothered.

While I will freely admit that the constant mixing of disparate horror movies into one piece of filmmaking had be chuckling more than groaning, you always run the risk of lifted elements spoiling potential surprises. Here, the dead giveaway is that the film lifts its setting right from PSYCHO, with the Bates Motel replaced by the roadside wax museum. Looming behind the commercial enterprise (which, like PSYCHO, was driven to ruin by the arrival of brand new highway) lies The House. You know, the place where the killer lives. Anyone familiar with Hitchcock's classic can see where the film is going with all of this. Slausen is a maniac with a split personality. Davey was his brother and, again like PSYCHO, was killed by Slausen after discovering Davey's sexual proclivities.

The persona of Davey is clearly lifted from THE TEXAS CHAINSAW MASSACRE, with the hulking killer wearing plaster casts of his victim's faces. The finale replaces a screaming Sally, driven mad by the Sawyer family, with a screaming Molly, driven mad by a bizarre mix of Carrie White and Norman Bates. All the various lifted bits and pieces come crashing down in a glorious cacophony of self aware lunacy, all shrieking mannequins and human cries of psychological anguish. It's a treat to watch, even if you know where it will all end up and what avenues it will take to get there.

The only real complaint I have about the film is that it's constructed in such a way that the second act feels very slow. We have a lot of learnin' to do about Slausen, his dead wife, his hopes and dreams, and why he has hung around these parts well after his life has all but crumbled away. We have to sit around and wait for a character or two to grow bored enough to go take a walk in the dark for any real horror movie stuff to start happening. All we really want to do is make our way back to the house behind the museum, the place where we know all the bad shit happens. The film teases that out to a length I found inappropriate. By the 40 minute mark, I was getting bored. Thankfully, once we finally get a chance to meet Davey in all his creepy glory, the film barely stops to catch its breath, doling out the shocks and set pieces at a fantastic clip. It becomes tremendous fun.

And I cannot stress that enough. TOURIST TRAP is a fun, creepy horror movie, one that deserves a far wider fan base than it currently has. It has just the right flavor of insanity, just the right amount of nightmare fuel, just the right touch of morbid humor. It is not an overly bloody, cynical, nudity-filled exploitation flick. It's a cartoon, overblown and ridiculous, pumped full of imagination and mescaline, the perfect horror movie to watch on a Saturday afternoon for a few laughs and thrills.
Posted by David Grant at 3:19:00 PM
Email ThisBlogThis!Share to TwitterShare to FacebookShare to Pinterest
Labels: mannequins scare the shit out of me, Slasher film, Tourist Trap