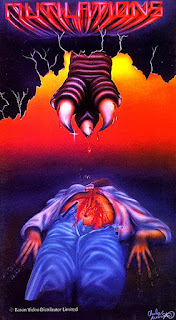 Larry Thomas' 1986 sci-fi horror flick MUTILATIONS exists somewhere between THE GALAXY INVADER and EQUINOX. It begins with a 3 minute credit sequence of stock space photography and Casio music before introducing us to our characters, all of whom played by actors clearly reading their lines off of cue cards. The dialogue is forced and unnatural. It sounds like someone reading from a Wikipedia article. For example, after one of his students remarks that people look at him funny when he mentions aliens, Professor McFarland, our brave and learned hero, opines:

PROFESSOR: “Roger, people react that way one, because they're ignorant and two, because many are frightened of the possibility that intelligent life may exist.”

That leads to the following exchange.

FEMALE STUDENT: “But NASA has made it more acceptable in popular thinking by sending out space probes to prove or disprove the existence of life on other planets in our own solar system.”

PROFESSOR: “And there is a group in Washington known as SETI, the Search for Extra Terrestrial Intelligence that's conducting all sorts of reports into and investigations of UFO incidents and the possible communication of radio telescopes.”


And on and on it goes for several minutes, offering up all the exposition it deems necessary in an attempt to make its slim plot seem credible. It soon becomes apparent that even though we are inside an astronomy classroom, scientific rigor isn't the Professor's strong suit. We hear all about ancient aliens, weird luminous lights in the night skies and cattle mutilations. All this talk of little green men prompts the Professor and his class to take a field trip to a place called Berry Hill, a farming town beset by alleged extra terrestrial hooligans.

Once our crew arrives in Berry Hill, MUTILATIONS stops being a slow and disastrous mess of a sci-fi flick and becomes… well, it never stops being disastrous, but it does become a hell of a lot of fun. Even more surprisingly, it becomes quite impressive. Unlike the Galaxy Invaders of Don Dohler, the aliens in MUTILATIONS are largely presented as giant stop motion animated beasties (with the occasional use of puppetry). It's DIY Harryhausen stuff and while it certainly isn't convincing, I was impressed by how much effort Thomas and Co. put into the man vs. alien battle scenes. Most filmmakers on a micro budget would have just thrown together a cheap costume for their creatures and called it a day.

I'm of the opinion that a bad practical effect will always be infinitely better than a bad digital effect, if only because that bad practical effect existed in reality. Someone had to make the appliance, glue it down, put paint all over it, etc. Someone had to build the spacecraft, design the model, manipulate it on camera, etc. There's a charm to practical special effects, especially the less than stellar kind. I love 1950s sci-fi B movies with their obvious plastic flying saucers and rubber suit aliens. I love it when I can see the zipper, although I love it even more when I can't. Digital effects will never have that charm. These days, you can create massive space battles or epic war scenes with thousands and thousands of ships, planes, orcs, humans, aliens, whatever the hell you want with computers. The only limiting factor it seems is the imagination of the filmmakers and the patience of the people doing the programming. But while digital effects can be stunning, transformative and even transcendent bits of movie magic… there's nothing really there.

That's why watching a rubber suit monster feels different than watching a CGI creation. One is actually on screen, actually walking through sets, actually existing. The other is just polygons and meshes and textures. So when MUTILATIONS starts throwing plastic spacecraft at the house our heroes are currently hiding in, I smiled like an idiot. When Professor McFarland faced off against a stop motion alien monster (in poorly composited fashion, no less), I was giddy with nerdy joy. There's a terrific scene where an alien punches through a woman's back, it's scaly claw like hand erupting from her stomach. Instead of pulling the woman free, the Professor proceeds to cut the alien's arm off at the elbow. THEN they pull the appendage from the woman's stomach. It's corny, not very well executed and all around fucking great.

The final act of the film happens in tunnels that resemble, probably not coincidentally, the sets from PLANET OF THE VAMPIRES. All the lighting becomes gelled, just blues, pinks and reds. The camera work become hyperactive, real Raimi-esque with sharp whips and pans punctuated by unexpected close-ups. I stopped caring about the crappy dialogue and crappier performances. I didn't care that they didn't just buy a mouse from a pet shop and instead used an oversized stuffed rat from a toy store. I didn't care anymore that the film was cheap and sloppy.

More effort went into making MUTILATIONS than probably went into making half of all slasher films. You can tell that the people making this film gave a shit about it and were actually trying to produce something worthy of an audience. This film would never win any awards. It won't be mentioned in the same breath as ALIEN or THE THING. Well, fuck accolades. This movie has heart and a mountain of low budget charm. The effects work might not be Hollywood caliber, but it is certainly far more ambitious than what you would normally see in a super low budget sci-fi B flick from the 1980s. It's a shame that Larry Thomas never made another film (hell, most people involved with MUTILATIONS never worked again on a film). This was a damn good start. He could have been a cult favorite by now.
Posted by David Grant at 10:29:00 PM
Email ThisBlogThis!Share to TwitterShare to FacebookShare to Pinterest
Labels: 1986, Alien, Alien Invasion film, Larry Thomas, Mutilations, Sci-Fi, stop motion effects