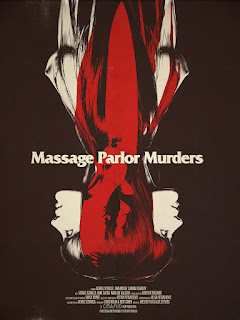 MASSAGE PARLOR MURDERS, a 1973 joint effort from writer/directors Alex Stevens and Chester Fox, wears many hats. On the surface, it's a simplistic, largely anti-climatic, detective story involving two hard-nosed cops (both of whom have soft spots for hookers massage parlor workers) on the trail of a serial killer. Visually, the film is a proto-slasher, replete with POV shots, gloved hands carrying out violent acts, and lingering shots of nude and butchered female flesh.

It's also downright brilliant in the way it fucks with your expectations. With a title like MASSAGE PARLOR MURDERS (previously known as MASSAGE PARLOR HOOKERS), you would expect the film to be more or less dripping with sleaze. But while the film is certainly far from puritanical, it isn't as deviant as you would expect. Stevens and Fox seem to be having a good time devising ways to frustrate their male audience. The film begins with your standard porno set-up, with an attractive, sexually aggressive woman subtly manipulating/seducing a soft spoken guy. As she strips off more and more of her clothing, we brace ourselves for the inevitable vicarious pleasures of dirty 1970s low budget sex. But nothing ever comes of it. The man gets cold feet, apologizes profusely for wasting the girl's time and leaves. Cue the opening credits.

And if we move away from the weird sex stuff, we don't get any closer to normality. The naked pool party gives way to a car chase that seems to all be happening in the same 30 foot stretch of New York City. As tradition dictates, a produce stand needs to be destroyed in the chase. As the filmmakers clearly couldn't afford a permit to shoot in the busy streets, that produce stand mysteriously appears in a truck depot right off the filthiest pier in all of New York. Late in the film, our two coppers, O'Mara and Rizotti, pay a visit to a New Age German quack, an older man that we meet mid-soliloquy, just a weirdo whining about how his sleeping pills are messing with his horoscope.

Even our cop leads feel out of place in the world, like transplants from some alternate reality. Rizotti is so hyper-masculine and prone to violent assault that he feels like a cartoon. O'Mara is a hapless dolt whose faulty intuition somehow always turns out to be a net positive, the exact opposite of how that shit would work in real life. Only the women are treated with any kind of realistic touch. They're the tether that keeps this dumb fucking balloon from floating away.

Unfortunately for those women, they're taking part in the only bit of the film not written to be absurdist or just plain laughable. The slasher bit.

There's nothing funny at all about the violence meted out towards women in this film. The special make-up effects are certainly not anything to write home about and more often than not, the actresses playing corpses still breathe and blink like everyone else, but because the violence is treated very matter-of-factly, it hits a hell of a lot harder than you would expect it to. Everything else about the film is either strange, unintentionally funny, or highly hyperbolic. But the murder scenes… The tone is serious and the impact is undeniable because of it.

The violence towards women defines the serious side of the film. Even though we have a supporting female lead (played by Sandra Cassell of THE LAST HOUSE ON THE LEFT fame), her entire purpose in the film is to die, to spur her lover into action, to serve as the final straw. The film uses its female characters as victims and objects, playthings that will eventually get broken by someone, usually a man. Both Rizotti and O'Mara fall in love with hookers massage parlor workers and both of those hookers massage parlor workers end up dead. Do they mourn the loss of their lovers? Not really. They're both just angry that they didn't do their jobs well enough to catch the killer in time. Showing emotion over the loss of their lovers would break the film.

It's a strange (I feel like I've said that 1,000 times by now) angle for the film to play, but it largely works as a self reflective bit of genre filmmaking. The men in the film all act like they're playing some kind of game. The masculine men are hyper-masculine. The weirdos and the sex pests are dialed up to 11. It's a mad, mad, mad, mad, man's world, bathed in male lust and manly heroism, testosterone screaming through it's veins. The fact that this world is built on the bodies of women, bloodied and broken, used and neglected… Well, let's not dwell on that too much. It might ruin the fantasy. And yes, the film does often frustrate both the men trapped inside of it and the men sitting in the audience, but it more than makes up for those frustrations by punishing their source. The women.

Or maybe I'm thinking too much here. Maybe this isn't a slice of meta-exploitation. Maybe it's just a cheap, lousy thriller. Maybe.

But I honestly don't believe that. The film works too well as a kind of critical self aware bit of exploitation. That can't be a mistake. It can't be.
Posted by David Grant at 1:43:00 AM
Email ThisBlogThis!Share to TwitterShare to FacebookShare to Pinterest
Labels: 1973, Massage Parlor Hookers, Massage Parlor Murders, Proto-slasher, Sandra Cassell, Sandra Peabody, Slasher film