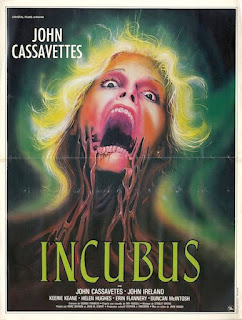 John Hough’s 1982 horror oddity THE INCUBUS opens in typical slasher style, with bikini-clad babe Mandy and her boyfriend attacked by someone unseen as they putz around the beach. Though the boyfriend doesn’t survive the attack, Mandy does, albeit with a ruptured uterus, the terrible side effect of a rather brutal rape. New-in-town doctor Sam Cordell, a distant and troubled middle aged guy with a vivacious teenage daughter, can’t find a drop of semen in the victim. With Mandy currently comatose, the chances of finding the culprit are pretty slim.

Thankfully (unfortunately?), the rapes don’t end there. The next victim is found dead and ravaged, her uterus positively overflowing with what appears to be red semen. The savagery and excessive bodily fluids lead Sam and the local Sheriff to believe these attacks might be caused by a vicious gang of brutish men. But the real answer might be something much more fantastical. Across town, Tim, the teenage boyfriend of Sam’s daughter Jenny, is having nightmares of a woman trapped inside what appears to be a medieval torture dungeon, replete with numerous robed Inquisitors. Tim’s dreams seem to correspond with the attacks on the local women. Is this a psychic premonition or is Tim somehow connected to a dangerous, supernatural force leaving a trail of mutilated and violated corpses all across the little town of Galen?

THE INCUBUS is a real mixed bag of nuts, emphasis on the nuts. It’s one part murder mystery slasher and one part supernatural monster flick, all wrapped in a kind of plastic reality nightmare film that instantly calls to mind other better plastic reality nightmare films like THE SLAYER and A NIGHTMARE ON ELM STREET. To say that these individual narrative styles abrasively rub against each other is a bit of an understatement. It’s the slasher elements that most get in the way. There are simply too many POV shot-laden stalk and slash set pieces going on here. THE INCUBUS was based on a pulp novel by the prolific author Ray Russell and I imagine the film works better as a 100 plus page tome than a 90 minute film, if only because Russell didn’t have to factor in the amount of theater showings during his writing sessions.

The supernatural side of things is pushed way to the side in the film so Hough can squeeze as many slasher set pieces in as possible. As a result, once we finally learn what’s going on in this little town, the solution doesn’t quite hold up. Tim’s dreams really do have a connection to the rape/murder spree, though the quick three and a half sentence explanation just brings up more questions. At this point, I don’t think it’s spoiling anything (I mean, the film is called THE INCUBUS after all) to say that the culprit is an ancient, magical rape monster with a major backlog of red semen to purge. But why exactly is this beastie roaming the streets? We learn that the town already had a rash of unexplained rape/murders 30 years ago. Why is the Incubus back on the prowl? Why does it choose to take the form it chooses to take and what exactly is the solid, concrete link it has to Tim?

None of this is ever really answered because the film doesn’t have any running time to spare. And those are far from the only unanswered questions. We learn that Sam’s age inappropriate girlfriend had died quite awhile back, possibly even murdered by Sam himself. As a result, Sam is a big bundle of aimless sexual yearning, a fact that is most obvious when he spies his 18 year old daughter naked in the bathroom. As Sam begins his investigation, he meets a local reporter named Laura who is the spitting image of his dead girlfriend. But why? In a film where nothing is really a coincidence, I would expect something to come from Sam’s sudden face-to-face with his dead girlfriend’s doppelganger yet nothing ever does. It’s like there’s a whole other movie lurking just below the surface that the film keeps hinting at, possibly as a way to sell more paperbacks.

That isn’t to say that what is on offer here is worthless. There’s a lot of fun to be had with THE INCUBUS. If you’re looking for a film that truly embraces its inner sleaze, you’ll probably be disappointed. It might be a film about violent rape/murders, but it rarely indulges in graphic bloodletting (well, apart from a half-decapitation with a shovel and a most unfortunate errant shotgun blast) instead focusing more on an upsetting tone, and a nice, oppressive atmosphere. The performances are actually quite good all around and that really helps the film stay firmly in the realm of believability, even as the narrative takes a turn for the loopy. It also boasts a remarkably great final scene, a real shocker that sends the film out on a high note.

THE INCUBUS is a film best watched at 50% cognitive power. There are plot holes and unexplained narrative developments galore, but as a piece of understated supernatural horror, it’s actually a decent little film. I just can’t help but think it would have been a better film had it ditched its fang toothed terror for a true blood slasher villain or vice versa. It’s positively jam packed with enough shit to fill three low budget, semi-obscure horror films from the early 80s. When the film is at its peak, the schizophrenia enhances the absurdity and, as a result, enhances the fun. But that aftertaste… When it’s all said and done, it’s what isn’t explained or explored that really sticks in the mind after the credits roll. I'm not sure that's what Hough was going for.
Posted by David Grant at 9:13:00 PM
Email ThisBlogThis!Share to TwitterShare to FacebookShare to Pinterest
Labels: 1982, buckets of sperm, John Hough, Monster movie, Slasher film, Slasher movie, The Incubus, witchcraft