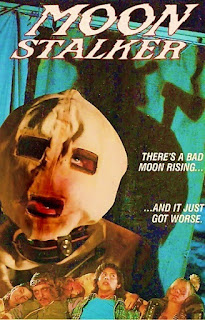 The slasher film wasn’t just dead by 1989, it was a rotting, festering corpse. What little creative energy was left in the sub-genre had long since abandoned camp grounds and high schools for plastic reality nightmare films. The slasher had been Xeroxed into the dirt, with years and years of rip-offs, retreads and lazy sequels leaving all but the most passionate slasher devotees longing for something new. To be honest, it’s quite astounding that the slasher film lasted as long as it did. After all, there’s only so many variations on “man in mask kills teenagers”.

Not that we went to see these films for their creativity. No, we went to see each new slasher for no other reason than we enjoyed the ride. It’s really no different than visiting the same amusement park each summer. We don’t go in expecting that our favorite roller coasters will have suddenly grown loops where once there were only slopes. We just really enjoy the familiar inclines and drops, loop the loops and rickety tracks. There’s a comfortable quality to slasher films, rooted in familiar formula and convention. Sameness, to many slasher fans, is a virtue.

I saw Michael O’Rourke’s 1989 slasher film MOONSTALKER a long time ago, way back in the days of video rental stores. Back then, I used to keep track of every movie I watched, even giving it an ‘X out of 10’ score. MOONSTALKER, to my 11 year old mind was a solid five stars out of 10. Clearly, 11 year old me was far less picky.

Had MOONSTALKER been released in, say, 1983, chances are the film would have fared much better. This inane tale of a recently escaped mental patient laying waste to a group of camp counselors-in-training has a kind of self aware quality to it, a trait that might have amounted to something back when slasher films were starting to really over saturate the market. But this film came out in 1989. As a result, all its attempts at self deprecation are for naught. Imagine someone tells a joke at a party, the room exploding in laughter. Then an hour later, someone else comes along and tells the exact same joke, only this time they stumble over the words and fumble with the punchline. That’s what MOONSTALKER feels like, a joke told an hour too late.

The fact that the film is a farce is apparent right from the start. A weekend warrior father, Harry, has dragged his family out of their cozy home for a weekend retreat in the middle of nowhere. It’s the dead of winter, all the trees surrounding their RV are barren and lifeless. It’s the anti-FRIDAY THE 13TH set-up. There will be no bikinis in this film. A car arrives towing a camper. The man driving the car is named Pop, an old timer with an ax in the trunk. After night falls, the family sits down with Pop by the fire, trading stories and whatnot. The old man is fascinated by the microwave inside Harry’s luxury RV.

But that microwave is nowhere near as interesting as what Pop is hiding away inside his camper. Turns out, Pop isn’t some harmless old coot. No, he’s currently hiding his son, a recently escaped nut bag, in his camper. He unleashes Bernie, the least threatening name ever for a would-be franchise slasher movie villain, on the family and watches with glee as his son makes short work of them. Just one problem… Pop has a massive heart attack from the strain of lifting that glorious microwave. Now there’s nothing stopping Bernie from killing his way across the county.

MOONSTALKER is terrible. A lot of what makes the movie so intolerable is the cheapness of the production. The Wilderness Counselor’s Training Program our characters are attending? It’s just four tents in a small clearing in the woods. There isn’t a single daytime shot in the entire film, an observation which leads me to believe that either the filmmakers shot this nonsense in someone’s back yard or that they couldn’t afford a shooting permit. Because they couldn’t afford a more lavish, open setting, some of the events in the film make no sense. I mean, I might be able to overlook the fact that no one hears a scream coming from five feet away (in a murder scene lifted straight from FRIDAY THE 13TH, PART V: A NEW BEGINNING), but I really, truly cannot overlook the fact that no one hears a GUNSHOT coming from five feet away.

With no money to actually stage proper scenes, O’Rourke spends most of his time following Bernie around the camp, watching as he peers into tents, walks into a nearby cabin, stumbles around in the dark (because he’s wearing goddamn sunglasses), and does nothing much of interest. Characters sit in their tents or engage in nudity-free showers and/or fully clothed sex scenes. There’s a bit of a budding romance between glamour boy Ron and Final Girl Debbie, and though the film handles that stuff surprisingly well, it amounts to absolutely nothing as Ron is unceremoniously bumped off like your bog standard red shirted ensign.

The ending is really the only interesting part of the film. It takes 83 minutes before a single memorable murder scene takes place (just so you’re aware of the pacing issues, the oddly specific camp fire story that acts as both foreshadowing and exposition takes place at the goddamn 54 minute mark), but from that point on, MOONSTALKER becomes good fun, if only because Debbie accidentally murders every police officer she comes across. But really, Dear Reader, we’re talking about nine good minutes of a 92 minute film. The preceding 83 minutes are a long, difficult slog.

MOONSTALKER contains all the essentials. A psychopath with an ax? CHECK! A gaggle of camp counselors to stalk and murder? CHECK! A few limbs being forcibly sliced off with a variety of sharp instruments? CHECK! A piano soundtrack that clearly rips off HALLOWEEN? CHECK! Musical stingers pulled straight from THE SHINING, another movie about a psycho with an ax threatening the lives of people in a snowy place located in the middle of nowhere? CHECK!

All the usual suspects are present and accounted for, but virtually everything in MOONSTALKER is mishandled and tired. It’s too cheap, too derivative, too stale, too little and too late. A bad movie isn’t made better by including many direct references to other, better movies. It just makes you wonder why you’re spending time slurping down shit when you could be sipping champagne.