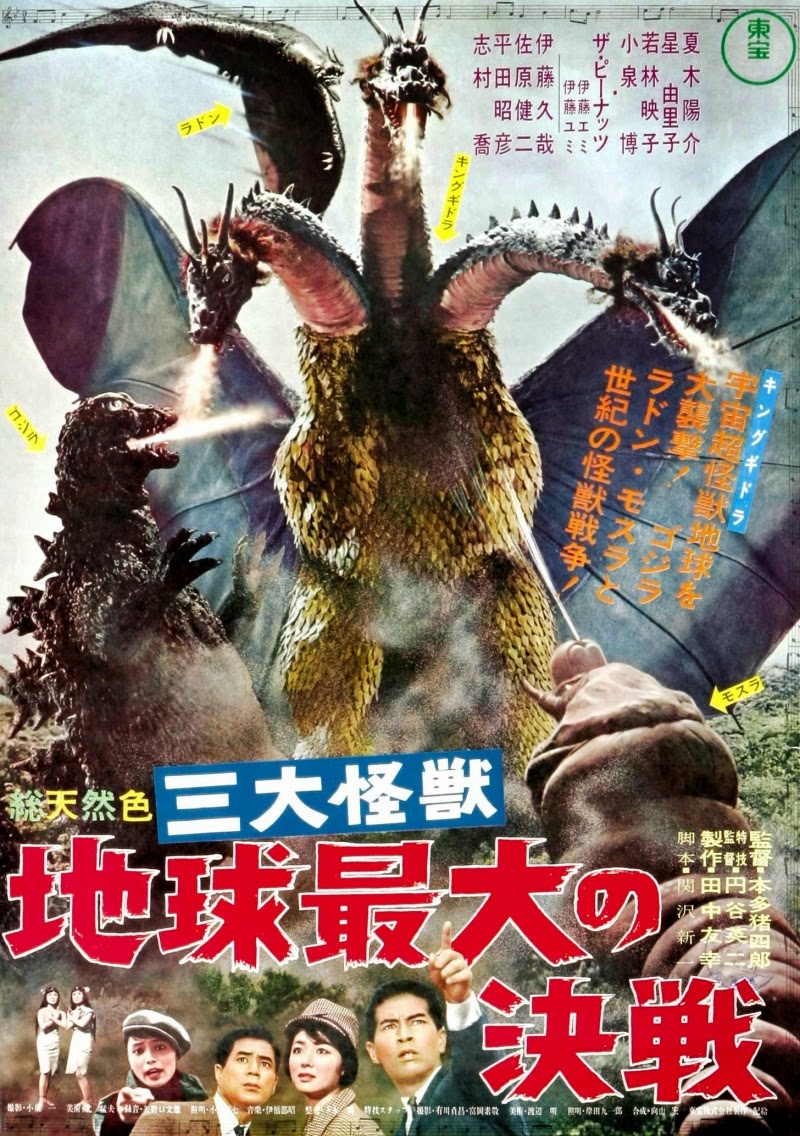 The success of GODZILLA and GODZILLA RAIDS AGAIN led to several giant monster movies being made on the back lots of Toho Studios. After Godzilla was buried beneath ice by the Osaka Air Force, RODAN appeared to terrorize the people of Kitamatsu, VARAN THE UNBELIEVABLE began sinking ships in Tokyo Bay and MOTHRA took to the skies to protect Infant Island. All of these movies (with the exception of VARAN THE UNBELIEVABLE) were hits. Their titular monsters all entered the popular culture of Japan and the zeitgeist of the Japanese film industry began, just a little, to change. Japan had discovered the B-movie.

In 1960, Willis O’Brien, the effects genius behind KING KONG and MIGHTY JOE YOUNG, had an idea. After a slew of monster films invaded international cinemas, he felt it was time for King Kong to make a comeback. O’Brien’s idea concerned a fight in San Francisco between Kong and a giant Frankenstein’s Monster. He worked hard on the concept, producing a treatment that was accepted by the executives at RKO Pictures, the famed production house that still held the copyright on KING KONG.  With RKO long out of the production side of filmmaking, O’Brien still needed to find a studio willing to make his dream project.  He was introduced to a savvy producer by the name of John Beck. At the time, Beck was working for Universal-International, a company with a rich tradition of monster films like THE DEADLY MANTIS, CREATURE FROM THE BLACK LAGOON and THE MOLE PEOPLE. Beck immediately went to work on finding a writer to flesh out O’Brien’s treatment. Hired to write the script was George Worthing Yates, the writer of THEM! And EARTH VS. THE FLYING SAUCERS (among many, many others). To O’Brien’s disappointment, Yates removed all references to Frankenstein and changed the monster’s name to Prometheus. The script was completed in relatively short time. Unfortunately, Beck could not secure the necessary funds in Hollywood and was forced to search the foreign market. The company that eventually put up the money was Toho.

The Prometheus monster was written out of the script and replaced with Godzilla. It isn’t a secret that Toho’s interest in the project had little to do with the story. They simply wanted their hands on King Kong. Having secured the rights, Toho suddenly had an epic prospect on their hands, a film with cross culture appeal that could be made cheaply and efficiently. Toho took pride in the film, even releasing it as part of the Toho Studio’s 30th Anniversary Special series of films. To this day, KING KONG VS. GODZILLA remains one of the most profitable Japanese monster films ever made and, despite reports to the contrary, is one of the best films in the Godzilla franchise. Deftly mixing fan service, blistering attacks on corporate greed and rampant commercialism, and classic Toho-style monster battles, KING KONG VS. GODZILLA, a film made by the same creative team that launched the franchise, would single-handedly make Godzilla a viable commercial property again.

The next film in the franchise, GODZILLA VS. MOTHRA, pushed the series squarely into the realm of science fiction. A gigantic egg is found in Japan. Seizing the opportunity to exploit the public’s interest in this strange, alien discovery, the egg is quickly snapped by a greedy promoter named Kumayama (shades of KING KONGs Carl Denham). Despite the pleadings of Mothra’s Twin Fairies (seriously; they’re one foot tall Japanese twin pixies), Kumayama refuses to return the egg. Then Godzilla shows up and all hell breaks loose. The heroes of the film, a reporter, a photographer and a scientist, rush off to Infant Island, the home of Mothra, to beg for help. Eventually, the inhabitants of the island relent and Mothra is dispatched to deal with Godzilla. Unfortunately, Mothra is no match for the King of the Monsters and is killed. But Mothra’s egg hatches and her children (in larvae state) manage to take Godzilla down before swimming back to Infant Island.

Mothra had already been the star of her own successful picture (directed by Ishiro Honda, no less) in 1961. If KING KONG VS. GODZILLA was a smash, there was no reason for Toho to doubt the appeal and cross over potential of this match up. It’s a great monster film, full of life and laughs, great action sequences and likeable human characters. The techniques used in the film were also improved, lending the film a real shine that the previous films in the franchise were missing. It was a hit with theatergoers, virtually guaranteeing that Godzilla would return to Tokyo once more. And audiences didn’t have to wait long for that return. Eight months after GODZILLA VS. MOTHRA debuted in theaters, GHIDORAH, THE THREE-HEADED MONSTER roared into theaters, giving birth to one of Toho’s most famous monsters.

Truth be told, as important as GHIDORAH, THE THREE-HEADED MONSTER (or, depending on the translation, GHIDRAH, THE THREE-HEADED MONSTER) is to the franchise, it is one of the more ridiculous entries in the Godzilla series. The film is burdened with an uninteresting and unbelievable subplot involving a princess, her attempted assassination, and her sudden belief that she is really a prophetess from Venus. The princess comes under the protection of a detective named Shindo. Between dodging hitmen and endless assassination attempts, Shindo’s reporter sister attempts to exploit the princess for a news scoop. As if that wasn’t complicated enough, a meteor has crashed to Earth, carrying inside it the giant, three-headed dragon Ghidorah. Ghidorah bursts from the rock and proceeds to destroy everything in his path. The Twin Fairies call upon Mothra to help protect the Earth, leading her to recruit the temperamental Rodan and Godzilla to help put an end to Ghidorah’s reign of terror.

Now it must be said that relatively few of the GODZILLA films are heavy on the monsters. Most of them have a main plot, usually dealing with aliens trying to take over Earth, and a human element to the narrative with the monster battles acting as a backdrop. This film is no exception. It takes an hour for Ghidorah to wake up, an hour and ten minutes for Mothra to enter the film and another twenty minutes on top of that before any real monster action occurs. Sprinkled through the endless scenes of Shindo and the princess dodging bullets are mind numbing scenes of military types talking, Twin Fairies singing, people reacting to things outside of the frame, etc. Everything in this film is padded to death and overly complicated. To make matters worse, the monsters in the film are anthropomorphized. Mothra takes on the role of guidance counselor, trying her damndest to get Rodan and Godzilla to play nice and team up to save the Earth. All the roars and groans and chirps and grunts are translated for us by the ever-present Twin Fairies. It’s utter psychosis.

Unable to get Rodan and Godzilla to cooperate, Mothra goes it alone and gets roundly smacked down by the rampaging Ghidorah. At the last minute, Godzilla and Rodan show up and an epic four monster royal rumble breaks out. This is where the film is at its best. Yes, it’s campy (Ghidorah lasers Godzilla in the balls, Rodan stealthily dodges laser blasts behind rocks, Mothra gets to ride on Godzilla’s tail) and yes, it’s absolutely batshit insane but the level of complication in the action is staggering. It’s astonishing that they even manage to pull it off. It’s no surprise that Ghidorah and Rodan are flying around on wires. It’s no surprise that the endless boulders Godzilla chucks at Ghidorah are Styrofoam rocks. It’s all one big sight gag and it works beautifully. While the fight is going down, all the nonsense about princesses from Venus and bumbling assassins fades from memory. Sadly, this is the only redeeming thing about the film. Bloated up with an uninteresting human story that doesn’t even need to be there, padded out with too many useless dialogue scenes and way too slow to get to the action, GHIDORAH, THE THREE-HEADED MONSTER is simply not a good a film.
Posted by David Grant at 1:56:00 AM
Email ThisBlogThis!Share to TwitterShare to FacebookShare to Pinterest
Labels: Ghidorah, Ghidrah, Godzilla vs Mothra, King Kong vs. Godzilla, the Three-Headed Monster