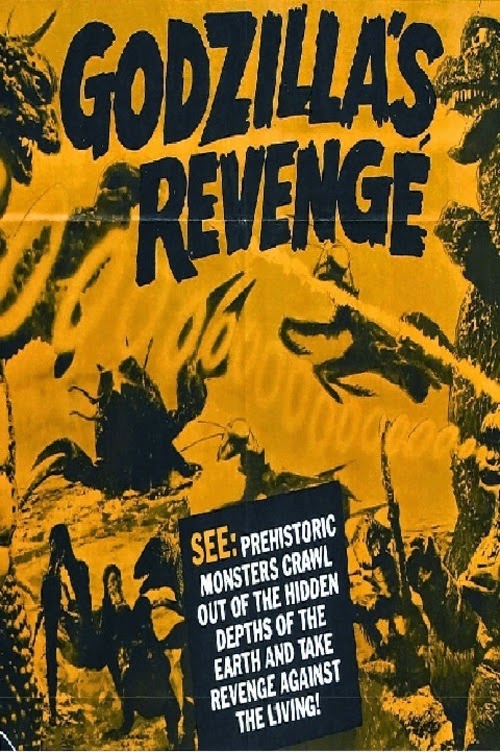 Diminishing returns led producer Tomoyuko Tanaka to declare an end to the once ultra-profitable GODZILLA franchise in 1968. DESTROY ALL MONSTERS, Toho’s monster fest that brought virtually ever famous Toho monster to the screen at once, was supposed to be the last entry. Unfortunately, it wasn’t. The 1970s were unkind to Toho and to the Japanese film industry as a whole. In 1969, the signs of the studio’s shaky financial future were everywhere. Theater attendance was declining, ticket sales were at an all time low and public support for Toho’s bread and butter franchises was disappearing. The young men and teenagers drawn to their monster fests had all but abandoned them. The only place for Toho to go was into the children’s markets, the singular arena where the science fiction film was still popular. Daiei Co.’s GAMERA films were still going and still performing well enough to turn a profit. The fourth (and at the time, most recent) GAMERA film, GAMERA VS VIRAS had a reasonably successful run at the box office and clearly Tanaka was paying close attention.

GAMERA VS VIRAS is one of the worst examples of footage recycling I’ve ever seen. Almost all of the monster footage is lifted from the previous films in the series. The only film that truly rivals the laziness of GAMERA VS VIRAS is GODZILLA’S REVENGE, Toho’s follow-up to DESTROY ALL MONSTERS. Even though Ishiro Honda was back in the director’s chair, Tanaka decided to simply reuse footage from earlier Godzilla films in lieu of filming all new battle scenes. The plot that was constructed for the film would be one of the strangest yet for a GODZILLA film.

A young boy named Ichiro is constantly bullied at school. He’s a latch key kid and a loner. One day little Ichiro is kidnapped by bank robbers. To deal with the trauma, he imagines himself on Monster Island where he befriends Godzilla’s son Minya. Minya is also having problems. He’s always being picked on by Gabara, a monster twice his size and capable of generating electricity. Godzilla wants his son to stick up for himself and put the smack down on his bully but Minya is terrified. Minya and Ichiro watch as Godzilla fights other monsters, have some monster / kid bonding and finally find their inner strengths. All of this parallels with Ichiro’s real life adventures with the robbers and his school yard bullies.

Let’s skip the niceties here. GODZILLA’S REVENGE is one of the worst films ever made, an absolutely horrible, incomprehensibly bad piece of garbage that shouldn’t exist on this planet. This is GODZILLA reimagined as an After School Special, a totally vapid, utterly disastrous insult to the collective intelligence of mankind. This is a cash grab masquerading as a message movie. The constant recycling of old footage reduces the film to a total waste of time for all but the most hardcore of GODZILLA fans. Tanaka’s desire to make a quick buck backfired, alienating whatever hardcore fanbase the franchise had left.

GODZILLA VS HEDORAH (or GODZILLA VS THE SMOG MONSTER) followed the next year. Encouraged by the success (even though small) of GODZILLA’S REVENGE, Tanaka thought it was time for the franchise to recapture its significance. The film would carry with it a social message, returning Godzilla to his allegorical roots, and dump the explicitly adolescent tone of the previous batch of films while still appealing to teenagers and children. Ishiro Honda would not be returning. Tanaka hired a promising young director named Yoshumitsu Banno and brought on board Riichiro Manabe to compose the score. Tanaka hoped the new hires would produce something that would appeal to audiences that had abandoned the franchise years back. Though GODZILLA VS HEDORAH was his first solo directing job, Banno was old hat in the film industry after having been assistant director on several Kurosawa films. Manabe was much more of a jazz composer than a classical composer, working on several films by the cutting edge visionary Nagisa Oshima. It’s clear that Tanaka’s decision to bring him on board was an effort to make the film feel hip and in tune with the attitudes of the youth in Japan.

As the film went into production, the Japanese film industry fell apart. Television finally became the medium of choice, keeping audiences out of the theaters in unprecedented numbers. Daiei Co. went bankrupt. Toho, so known for their in house effects extravaganzas, closed their famous special effects department. The company was fragmented and restructured. Tanaka became the president of Toho Vision, a studio offshoot comprised of many of Toho’s most talented ex-special effects department workers. They became a special effects company for hire, working on commercials and television shows. One of the holdovers was Teruyoshi Nakano, a special effects artist that spent many years working under Eiji Tsuburaya, Toho's legendary visual effects master. He was hired to bring the new Godzilla to life.

The booming economy in Japan had serious ramifications on the health of the country. Air pollution was sky rocketing. The air quality was so bad that oxygen tanks were installed on some street corners and people wore medical masks over their faces when they left their homes. This was the societal concern Banno and his co-writer Takeshi Kimura would address in the film. The creature Godzilla would fight during the film would not be a traditional kaiju. The monster, Hedorah, would be comprised of filth, pollution and trash. Godzilla would become, quite literally, a protector of the environment. The writing of the film proved difficult. GODZILLA VS HEDORAH was meant to be released as part of a special series of family friendly films, but that was not the film Banno wanted to create. The finished product is a strange mix of children’s story and nightmare horror film where cartoon monster designs and gross-out humor rub shoulders with mass death and grotesqueries.

If the tone of the film is confused, the look of the film is downright schizophrenic. The film is a strange mixture of avant-garde, classic kaiju, animation, horror, psychedelica and hippie environmentalism. It moves from a scene of Godzilla and Hedorah fighting to a strange animated interlude depicting a belching factory plucking plants out of the ground. Hedorah’s slithering is cross cut with a bizarre scene of a man hallucinating inside a dance club, all the patrons swaying in front of him while wearing fish masks. Everything about the film feels designed by committee. The opening credits are done in a James Bond 007-style with a pretty woman singing a grating song called “Save the Earth” (what else would it be called?). There is a moment where a bunch of friends are sitting on the beach in silence. With no warning or explanation, the scene abruptly turns into something out of a Frankie and Annette beach party flick. In terms of batshit insanity, only Nobuhiko Obayashi’s HAUSU tops this film.

There is nothing intrinsically wrong with insanity for insanity’s sake. That isn’t the problem here. The real problem is that they tried to pass this off as a GODZILLA film. It is missing all the familiar elements. Aside from one very brief scene, there is no human intervention launched against either monster. The fight scenes are preceded by endless stretches of Godzilla and Hedorah just staring each other down. The setting, much like the South Pacific films that came before it, is bland and uninteresting, mostly set in barren environments. All of the spectacle has been removed. In place of exciting visuals, we get something out of a Troma film. There are endless scenes of people screaming in agony before turning into piles of bones. Hedorah literally fires balls of steaming shit at Godzilla. When the big lizard throws a punch, his fist sinks deep into Hedorah’s body, coming out the other side covered in dripping goop. Hedorah often excretes a river of thick brown fluid that looks like diarrhea. When Godzilla finally puts Hedorah down for the count, he spends two whole minutes ripping chunks of slime from the monster’s stomach, eviscerating it in plain view of the camera.

Banno was very proud of his film. Tomoyuko Tanaka did not share his enthusiasm. Tanaka was hospitalized during almost the entire production. This allowed the filmmakers a level of control they might not have had otherwise. After being released, Tanaka viewed the film. He accused Banno of ruining the franchise. After GODZILLA VS HEDORAH, Banno would never direct another feature film.

The next two films in the franchise, GODZILLA VS GIGAN and GODZILLA VS MEGALON would bring the franchise down to an all-time low. Returning to the cheap practice of reusing footage from earlier films, GODZILLA VS GIGAN is littered with footage ripped from GODZILLA VS MONSTER ZERO, DESTROY ALL MONSTERS, GHIDORAH, THE THREE-HEADED MONSTER, WAR OF THE GARGANTUAS and several others. Even the soundtrack was a compilation of cues and themes from other movies. The story, a science fiction yarn about cockroaches in human disguise, recalls the typical “invading aliens” narratives of earlier films. The only interesting bit of the film is Gigan himself, a giant cyborg lizard from Star M in the Hunter Nebula with massive metal sickles for hands and a buzzsaw embedded in his stomach. The film does feature supporting monster turns by fan favorites Anguirus and Ghidorah but even they can’t save the film. It’s a shameless cash grab.

And then there’s GODZILLA VS MEGALON, one of the worst films ever made. A series of underwater nuclear tests all but wipes out the undersea kingdom of Seatopia. The inhabitants decide enough is enough so they send Megalon, a strange crustacean-insect monster, to the surface. Looking for an even greater advantage, the Seatopians steal a remote-controlled robot called Jet Jaguar and use it to bolster Megalon’s destructive force. A bunch of ridiculous shit goes down before the creators of Jet Jaguar regain control of their creation. Undeterred, the Seatopians contact Star M and ask for them to send Gigan to Earth. Gigan arrives, Jet Jaguar teams up with Godzilla and a tag team monster mash begins.

In the early 1970s, tokusatsu shows were all the rage in Japan. Shows like ULTRAMAN and ULTRA Q were eating up the ratings every week. So Toho, in another moment of extreme opportunism, decided to incorporate the giant robot craze into the next GODZILLA film. They held a contest to design an Ultraman-style robot. The winner was an elementary school student. If you’re asking yourself why Toho, a studio that still employed some truly brilliant designers, decided to leave such a pivotal design choice in the hands of elementary school students, you’re close to understanding why this film is so terrible. Everything about the film is a reflection of that lazy attitude. The backdrops are again barren landscapes, the Godzilla redesign looks terrible, the action is choppy and filled with recycled footage and all of the rough violence (and even a scene containing nudity) was left out of the foreign edit, the only version of the film that would available for decades. By the time GODZILLA VS MEGALON left theaters, Godzilla was treated as a joke by the critics and public alike. Toho’s most famous monster was living on borrowed time.

Posted by David Grant at 1:09:00 AM
Email ThisBlogThis!Share to TwitterShare to FacebookShare to Pinterest
Labels: Godzilla vs Gigan, Godzilla Vs Hedorah, Godzilla vs Megalon, Godzilla vs the Smog Monster, Godzilla's Revenge