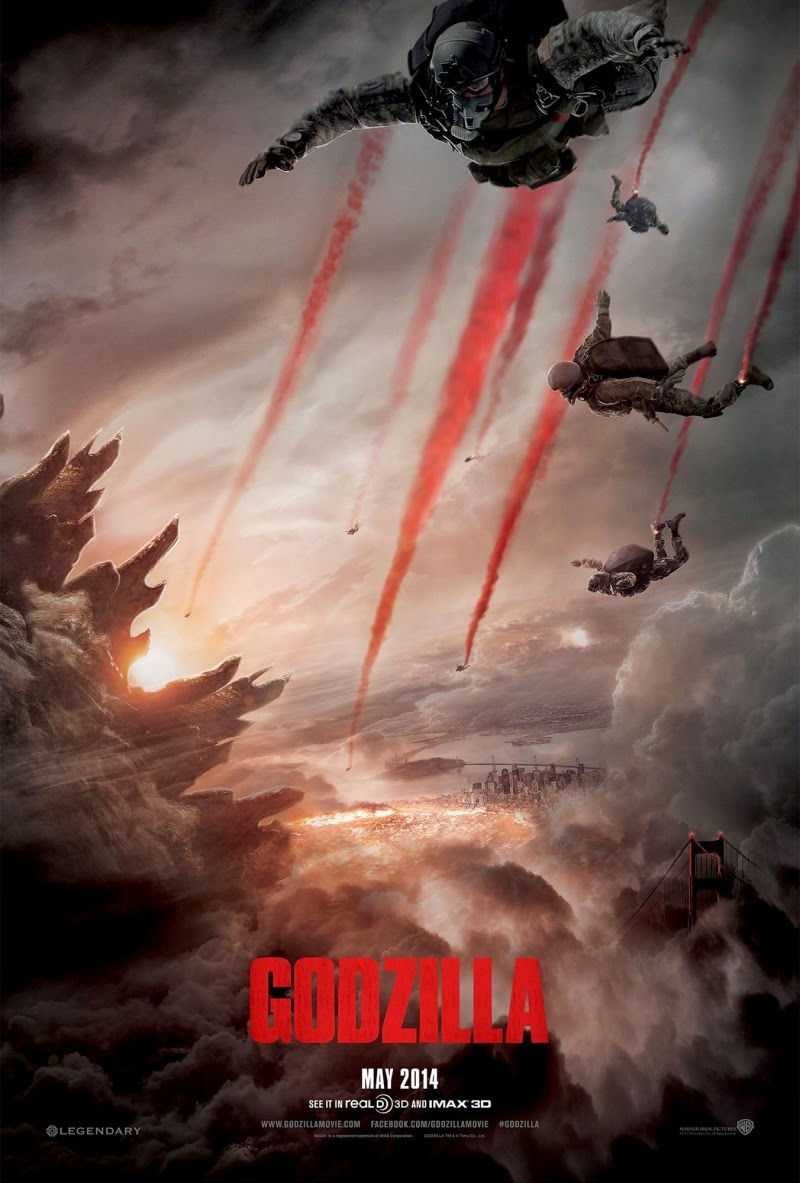 There’s a scene in Gareth Edwards’ GODZILLA of military types standing around a wall of monitors. On one of the monitors is a map of the west coast of the United States. Three different colored arrow paths mark the proposed trajectory of three different giant monsters. One of the analysts suggests a possible landing mark, a point of convergence for the creatures. This immediately brings to mind the endless analysis of meteorologists and storm trackers whenever a particularly nasty storm springs to life over the ocean. This obsessive tracking of nature may help us brace for impact, but it also fosters this naïve idea that if we can just predict where the storm will hit, if we can just prepare for it, then we can survive it. In reality, nature has an uncanny ability to kill us off by the thousands to the millions. No amount of preparation will ever be enough. Nature will always win.

This has long been the mantra of the disaster movie. Earthquakes level the most magnificent buildings, fires consume whole metropolises and meteors remove whole countries from the world map. They are expressions of a truth, that our continued existence is not a guarantee. We are at the mercy of forces much greater than ourselves. In playing this same card, GODZILLA emerges not as an action orientated monster fest but as a classic disaster film. It is far more concerned with how people would react to the fantastic situation of giant monsters running rampant in major cities than with said monsters fighting to the death. There are scenes of mass destruction, shots of bodies lying twisted beneath rubble, wounded men and women huddled in makeshift medical bays and a sea of frightened, confused faces. The military, as the military is wont to do, frantically tries to control an uncontrollable situation. But in the face of unstoppable nature, all we can ever really do is gawk and cower, run or die.

Anyone expecting anything more than a human drama will likely be disappointed. The majority of reviews are comparing this film to PACIFIC RIM, a decidedly non-serious film that revels in its scenes of destruction. PACIFIC RIM is a good film but it suffers from the same problem many action films these days suffer from: CGI burnout. Simply put, by the time you reach the midway mark of the film, all of the monster mayhem becomes redundant. Like TWISTER, it’s the same scene repeated over and over again. The only thing that changes is the size of the calamity. GODZILLA, if it has any source of inspiration outside of Honda’s 1954 masterpiece GOJIRA, owes more to JAWS than any other film. The monster action is meted out in small doses with the first handful of monster showdowns coming across as little more than teases of larger things to come. Time and time again, Edwards cuts away before a single punch is thrown. Why? Because he understands that the film needs to earn those scenes. Indulging at every opportunity would only blunt the effect.

That isn’t to say that GODZILLA is completely devoid of action, monster related or otherwise. The MUTOs, insect-like monstrosities from the same evolutionary and geological period as Godzilla, are frightening and perfectly realized creations. They get the bulk of the monster screen time here. While it might seem a bit hypocritical to call your film GODZILLA and then proceed to push the title character to the side in favor of the secondary monsters, I think the decision was the right one. Godzilla is right up there with King Kong in terms of popularity and, more importantly, familiarity. Even if you’ve never seen a GODZILLA film, you know what he looks like and what he’s capable of. The MUTO creatures are new creations and the film takes the time to set up their arrival and answer questions about their origins and abilities. If this film had not been a GODZILLA film, had it been solely about the MUTOs, I still would have enjoyed it. But without Godzilla, it would have taken one hell of a deus ex machina to bring the beasts down and so here he is, rendered in glorious CGI and voiced by an impressive catalog of Oscar-caliber sound design. The creature designs and special effects work on display in GODZILLA are simply awe inspiring.

People are simply not good at conceptualizing great heights or distances. Our brains have trouble with the incredibly small and the incredibly large. Usually in films like this, it’s difficult to really gauge the sheer size of the monsters or aliens. If I dug a hole in my yard six feet deep, you would have no problem visualizing that hole, if only because you probably know someone that stands six feet in height. Now if I told you the hole was 100 feet deep or 300 feet deep, chances are you would have a problem visualizing that. Godzilla and the MUTOs are huge things. Godzilla himself is said to be 350 feet tall. In any other film, we would have seen Godzilla in typical action shots, cameras swooping and weaving around the giant mass of destruction. Edwards does something much more interesting. Nearly every scene of monster action is framed by recognizable objects. Nearly every scene features one or more human characters on screen. When Godzilla emerges from San Francisco Bay, threatening to destroy the Golden Gate Bridge in the process, Edwards films the action from within school buses. He keeps soldiers in plain view of the camera. We have a constant frame of reference and that helps us grasp the sheer size of the monsters. It’s such a simple trick but it pays off beautifully. You can’t help but be amazed by the spectacle and overwhelmed by the sheer size of the beasts.

With all of the monster mayhem regulated to inciting incident material, it falls on the human side of the story to move the picture along. Opinions will vary on how successful Edwards and his band of actors are at pulling this piece of the puzzle off. I found it engaging and emotionally satisfactory, if a bit predictable. It barely rises above the typical “I got to get back to my wife” storyline that fueled hundreds of films before it, but it is all executed well and with a decent amount of conviction. Yes, there is a bit of bait and switch between the marketing of the film and reality of the film (let’s just say that Hitchcock would be proud) and the storyline does require a HUGE amount of coincidence to get everything working but those are minor complaints in the grand scheme of things. I can forgive exposition and coincidence if it pushes the plot forward.

Is GODZILLA a perfect film? No, it isn’t. Is it the best GODZILLA film since the original? I think so. One of the most enduring characteristics of the GODZILLA franchise is the kitschy quality of the effects work. Never, not even in the best of the Japanese GODZILLA films, do you forget that you’re watching a man in a rubber suit destroying model dioramas. Though they sometimes dealt with very serious subjects like overpopulation, pollution, nuclear proliferation and mass extinction, the nature of the series remained rooted in fantasy. The Saturday morning cartoon quality of the films made them endearing and likeable. I don’t honestly think that this film will have the same kind of legacy that the Japanese films enjoy. I don’t think this film will be enjoyed as easily as say GODZILLA VS MOTHRA or GODZILLA VS DESTROYAH. It is a grim film, much more interested in telling a good story than simply indulging in fan service. GODZILLA is easily the bravest big budget summer event film ever made, a stunning, exciting masterpiece that deftly smacks around its audience, deceiving them and depriving them of masturbatory indulgence every step of the way. GODZILLA might play hard to get, but when it finally decides to give up the goods, it is, in every way, an amazing thing to behold.