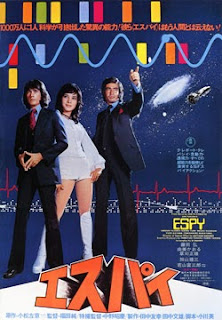 Hey, who spilled their SCANNERS all over my DANGER: DIABOLIK?

That's probably the best way to describe ESPY, Toho's 1974 action-Eurospy-headfuck of a film all about a group of ESP-wielding tough guys (and one gal) going up against another group of ESP-wielding tough guys (and one gal). The protagonists are part of an organized anti-crime unit known as ESPY (get it? ESP(sp)Y) and the antagonists fly under the banner of, what else?, Counter-ESPY. And what exactly do these naughty John and Jean Greys want? Well, to kill off all the Muggles, of course. They aim to achieve this by knocking off several European delegates before an important UN peace treaty meeting can get under way. On the top of their assassination list (for some reason) is the Prime Minister of Baltonia, but the ESPY group soon steps in, led by the smooth and cocky Tamura, and his love interest Maria. Also along for the ride is Miki, a racecar driver with latent (and apparently quite potent) psychic powers.

Getting into the minutiae of the plot is probably unnecessary, if only because the plot serves as nothing more than a set-piece dispenser for director Jun Fukuda (director of some of the worst Godzilla films ever made, including GODZILLA VS. GIGAN and GODZILLA VS. MEGALON, as well as one of the best, GODZILLA VS. MECHAGODZILLA). We get the classic “trapped in a car that's been rigged with explosives” moment along with innumerable chase scenes, girl in peril scenes, shoot-outs and fist fights, but here everything is augmented by the inclusion of psychic powers and other metaphysical gobbledygook. ESPY officers (soldiers? Peacekeepers?) can use telekinesis to throw people through the air, jam up guns, correct the flight path of planes ready to crash into mountains and rip out tongues (yes, those last two things happen in this movie). They can use telepathy to communicate over great distances, can hypnotize people in just a few seconds, and even, when the plot calls for it, teleport through space and time.

The way Fukuda and screenwriter Ei Ogawa (writer of the equally bizarre EPOCH OF MURDER MADNESS) use these abilities within the film… well, they cheat a whole lot. Abilities come and go whenever the tension needs a boost and the science behind all this is just weird. Apparently, electrical shocks can deplete your psychic energy and loud sonic reverberations can interfere with your body-mind connection in the same way a microwave can screw with your WiFi signal. Oh, and this psychic energy is caused, in case you were curious, by love. No shit. It's the power of love.

But it's difficult to dwell on all the pseudo-scientific mumbo jumbo when the film keeps throwing weird shit at you. Everyone in this movie carries guns that shoot what I can only imagine are bullet-sized grenades. People flat out explode into gooey bits constantly through this movie. And when people are not being shot with grenade pistols, they're being set on fire or taking ordinary bullets to the brain, chest, groin and legs. I was actually quite taken aback by just how violent ESPY gets at times. These splattery scenes are sharing space with a laid back, swinging 70s Eurospy-inspired romp, complete with a score that could have very easily been composed by Stelvio Cipriani. Even the lead villain is a bizarre contradiction of tone and appearance. I don't know what the hell they were thinking when they came up with this character, but he looks like a constipated Donald Pleasence doing the world's worst Charlie Chan impersonation. Everything about this character screams “campy”, but the rhetoric that spews out of his mouth sounds straight out of a 1930s Nazi rally. He looks like a buffoon while sometimes sounding rather terrifying, emblematic of this films inability to stick to one consistent tone.

But screw it. It's fun. No joke, ESPY is a damn good time. In fact, I would go so far as to say that it is easily one of my favorite Eurospy actioners, even if its Japanese origins preclude it from being considered Euro-anything. It looks great, the score is fantastic, the three leads (Hiroshi Fujioka, Masao Kusakari and Kaoru Yumi) are good looking with magnetic personalities and charm coming out their asses, and the entire film breezes by with a wild, reckless abandon, shredding logic, scientific rigor and torsos along the way. Toho produced a lot of cheap and quick entertainment throughout the 1970s and a lot of it has since faded into obscurity. ESPY is one of those films that few people outside of the Toho Faithful have ever seen. That needs to change. Because it's fun. I like it. I like it lots.
Posted by David Grant at 11:02:00 PM
Email ThisBlogThis!Share to TwitterShare to FacebookShare to Pinterest
Labels: ESPY, Toho