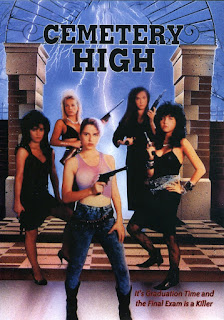 I sat through the opening credits, my eyes scanning each line intently. I felt a slight disappointment when they finished and the film began, but still I sat, waiting and hoping. As the movie reached the halfway point, the crushing reality set in. I realized that my slight disappointment had reached critical mass. I was not going to get what I wanted.

Roddy McDowall was not in this movie.

Worse, Rhonda Shear wasn't going to appear every ten to fifteen minutes to make some lighthearted innuendo before dousing my eyes with a wild barrage of raunchy phone sex ads.

In other words, watching CEMETERY HIGH made me long for the Friday and Saturday nights I spent up all night watching Up All Night, a late night movie marathon on the USA network that aired back in the 90s. For a perpetually horny teen, this blast of low budget exploitation was a welcome change of pace from ruining every JC Penney's catalog that came my way. Friday nights were usually hosted by Shear, a buxom blonde comedienne, and featured mostly b-movie action and horror flicks. Saturday nights were, more or less, dedicated to skin flicks (if a film had either Bikini or Carwash in the title, chances are it showed up here) and hosted by Gilbert Gottfried, a man who sounds like he's in constant pain. While the movies were always censored, my young, hormonal brain could not have cared less. The kinds of movies being shown on Up All Night were the kinds of movies I was into. It turned every Friday and Saturday night into a party.

I know I saw CEMETERY HIGH on Up All Night. I remembered the visual gags, the Gore Gong (which would appear on screen whenever someone was about to die) and the Hooter Honk (do I even need to explain this one?). Everything else had faded from memory. But hey, I loved this movie 20 years ago sooooo… how bad could it be?

CEMETERY HIGH could probably be best described as Roger Corman's NATURAL BORN KILLERS. It's about a group of high school graduate girls, all of whom were raped and abused by some meathead football players before graduation. They team up and go on a massive man hatin' killing spree, shooting every lecherous sleazeball they can find, and while this earns them the ire of the town's religiously conservative “get back in the kitchen” Mayor, the local press absolutely adores them, nicknaming them the Scum Busters. To make matters worse for asshole men everywhere, the popularity of the Scum Busters has led to an increase in female vigilantism, effectively creating open season on anyone packing a penis.

Now that sounds pretty grim and salacious, right? Well, the biggest problem with CEMETERY HIGH (aside from its title) is the fact that it is a comedy. Or at least it tries to be. This is the single biggest criticism I hear about this film. “It isn't funny”. Well, no, it isn't. At least not in the “laugh out loud” kind of way, but I think the film has merits to go along with its failings. See above where I called this film (basically) a low rent version of NATURAL BORN KILLERS? It is. In fact, if you combine this film and director Gorman Bechard's earlier trash opus PSYCHOS IN LOVE into one big flick, you would have all the essential components of Tarantino and Stone's over-indulgent, completely pretentious comic book of a film (a movie so glaringly obvious that it literally superimposes its message on the flesh of its characters). But what CEMETERY HIGH lacks (thanks largely to production fiddling by Charles Band) is a consistent tone and a clear line of vision. And professionalism. And a whole lot of other things BUT

The film does attempt a meta-commentary on not just violent exploitation flicks but the treatment of women within them. We've had a multitude of exploitation films featuring men murdering women for their social and sexual transgressions (chief among them, wanting to be treated with respect and wanting to enjoy sex) so why not a movie that flips the script a bit? Why not allow women their exploitation film due? Free from the kind of self-importance of MS .45, the killers in CEMETERY HIGH are Riot grrrls gone wild, avenging angels knocking off pornographers, pedophiles and aggressive alpha males. The portrayal of men in the film barely rises to the level of I SPIT ON YOUR GRAVE with every man portrayed as either a sleazy douche or a barely competent fuckhead. If the bumbling cops of LAST HOUSE ON THE LEFT put you off, good luck getting through any scene featuring the town's forensic pathologist or sheriff. The men in this film are invariably dumb, narcissistic, sexually obsessed, easily manipulated and/or useless.

Kinda like the women in most of these films.

But apart from merely switching around the traditional exploitation film gender roles, CEMETERY HIGH plays a very self aware game. There's a running gag among the characters all about whose turn it is to show their tits on camera. The film stops in its tracks to give us a fake commercial for an imaginary product, a bulletproof jock strap. The characters talk to the camera at regular intervals, telling us all about how they plan to sell their story rights to a Hollywood company, rake in some cash and buy a brownstone in Greenwich Village, the pinnacle of faux-artistic self-importance. They start very early on to pick out the costumes they'll be wearing at the films end, knowing they'll need to look cool for the inevitable dramatic bullet-filled finale. When they finally make their stand against the Mayor and his gang of gun-toting dudes, Morricone plays on the soundtrack.

Sure, most of the jokes along the way fall flat and the acting is sometimes somnambulistic, but the self-aware qualities of CEMETERY HIGH are refreshing in their own low budget way. Make no mistake, this is not high art. This is not Fellini's 8 ½. This is a b-movie with all the trappings of a b-movie, but the film has attitude, lovely actresses and a brisk pacing that whips the film forward through its barely 90 minute running time. Lots and lots of people hate this film. I am not one of those people. I genuinely enjoy CEMETERY HIGH, so much in fact that I watched the film twice in row before writing this. Why do I enjoy it so much? Honestly, a lot of it has to do with the fact that it is in many ways emblematic of the kind of film I used to devour on a regular basis. Some of it has to do with the fact that, obvious problems aside, it's just a fun little film. I like it.

Bet you didn't see that coming.
Posted by David Grant at 1:08:00 PM
Email ThisBlogThis!Share to TwitterShare to FacebookShare to Pinterest
Labels: Cemetery High