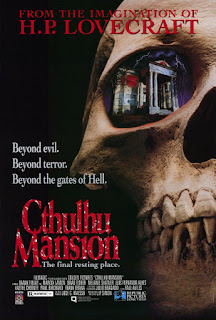 If you're expecting anything remotely Lovecraftian in Juan Piquer Simon's CTHULHU MANSION, forget it. This film has nothing – absolutely shitting nothing – to do with the Cthulhu Mythos. The only reason this movie was titled CTHULHU MANSION was to trick Lovecraft fans into renting it at their local Blockbuster. Simon's slice of low budget excrement was released in 1992, right in the middle of the direct-to-video Lovecraft boom, and it sits nicely alongside THE CURSE, THE UNNAMABLE and THE RESURRECTED as movies that make the bold artistic decision to adapt Lovecraft by not really adapting Lovecraft at all. To be fair, even RE-ANIMATOR has as much to do with Lovecraft as, say, any given episode of Animaniacs, but at least Stuart Gordon's film had a whiff of inspiration from the grand old master. Your typical Lovecraft adaptation from the 80s and 90s was just a bottom of the barrel, low budget clunker masquerading as an adaptation, usually only worth watching if the movie you really wanted to see was out of stock.

How low budget is CTHULHU MANSION? The opening credits play over the exact same “haunted house sounds” cassette tape my mom bought for me at a Woolworth's when I was a kid. When we finally get music, it's just Toccata and Fugue in D minor, the go-to choice for generic horror films the world over. The opening scene sets the tone for the bullshit to follow. Frank Finley (a damn fine British actor who must have had one hell of a rough patch in 1992 if he signed up for this garbage) plays a stage magician named Chandu. Chandu's opening act requires the assistance of his wife, Lenore. Their performance hits an unexpected snag when Lenore suddenly bursts into flames.

Decades later, Chandu is still at it, performing with his daughter Lisa (oddly enough, Lisa and Lenore are played by the same actress, Marcia Layton). A bunch of hoodlums rip off a drug dealer, get into a scuffle with some cops and then run off when their getaway driver, Chris, gets shot in the leg. These two story lines intersect when the thugs take up residence in Chandu's creepy old mansion, terrorizing Lisa, her father and their mute servant. And by “terrorize” I mean “force Chandu to patch up Chris, eat some of their food and periodically act a bit rude towards them”. There isn't much tension here and things only pick up when one of the thugs accidentally opens a door in the basement, unleashing a deadly evil force that bumps them off one by one.

Well, no. No, it isn't. Not even a little bit. The demonic shenanigans are exactly what you would expect from a dark and evil power so unbelievably strong it can be contained by a rickety old basement door. Vines entangle and drag one of the thugs (played by William Shatner's daughter) through a second story window. A man is drowned in the shower. Muppet hands emerge from a refrigerator. Slices of bread fly across the kitchen. Spooky sound effects from that cheap-o cassette tape drives one of our leads into a hyperbolic fit of panic. Wind machines come roaring to life off camera. Just when you think this couldn't get any more generic, all the dead thugs come back to life and Chris begins melting into goop. With their bag of haunted house tricks empty, Simon and his co-writer Linda Moore just start ripping off other films. The main antagonist gets Piper Laurie's death from CARRIE and the film ends with a scene lifted directly from THE EXORCIST.

Thanks for reminding me of the better films I could be watching!

But really, what do you expect from Juan Piquer Simon, a man whose chief claim to fame is that his film POD PEOPLE was skewered by the Mystery Science Theater 3000 gang? Personally, I was hoping for a bit more PIECES-styled insanity. That's a film where Simon really did manage to not just live up to his outlandish premise but dance wild, gonzo circles around it too. PIECES has a real energy and willingness to say fuck you to anything resembling logic. CTHULHU MANSION on the other hand feels like it was made to be “scary” or “serious”, like Simon and Co. actually thought they were making a respectable film.

But they didn't. What they made is a film that is overlong, completely devoid of any momentum thanks to poor utilization of characters (Lisa spends nearly the entire movie “locked” in a room with the unconscious Chris and I say “unlocked” because no one ever locks the damn door. She just never tries opening it.) and is lacking any kind of self awareness. Look, this is silly shit. When you write a movie where a woman is literally dragged into a fucking refrigerator by Wampa hands, any semblance of seriousness goes right out the window. So why not have fun with it? Why not chop out the ten unnecessary pages of characters sitting around and use that bit of production money to build a few exploding heads? Why not reward the audience with something clever rather than trying to make art out of dog shit? What this movie needed was a little more fun and a lot less tired, boring fuckery.

Oh and a change of name. Seriously. If your movie contains the word Cthulhu in the title and you can't even be bothered to, at the very least, include a single scene of tentacle molestation, you have no business making movies in the first place.
Posted by David Grant at 12:29:00 AM
Email ThisBlogThis!Share to TwitterShare to FacebookShare to Pinterest
Labels: Bad Lovecraft Adaptations, Cthulhu Mansion, Lovecraft