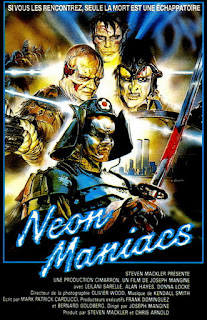 You can almost smell the hairspray.

Anyway, let's jump in. Joseph Mangine's turd of a film follows Natalie, a pretty, well-off blonde and her reluctant beau, Steven, the middle class son of a deli owner. One night, Natalie and her friends decide to joke around, screw and play some football in a park near the Golden Gate Bridge. Their night time frolicking is interrupted by the titular Maniacs, a group of about a dozen mutants(?). They make short work of Natalie's friends before being chased off by a thunderstorm. Natalie tells her story to the cops but they don't bite, writing it off as a joke.

Meanwhile, Paula, a horror nerd and classmate of Natalie's, learns of the attack and decides to do some sleuthing. She manages to sneak a peek at the Maniacs as they emerge from a maintenance shack at the bridge and even learns their weakness. One of the Maniacs slips and falls, it's hand landing in a puddle of water. That's right. Just like the aliens in ALIEN NATION (you thought I was going to say SIGNS, didn't you?), these creatures are water-soluble. After the Maniacs fail to kill Natalie and Steven a handful of times, the end game is set. The Maniacs invade a high school during a Halloween costume/battle of the bands concert (headlined by Steven's rad new wave band) and face off against Natalie, Steven and a fire hose-toting Paula.

If I had to describe the tone of NEON MANIACS, I would probably say that it's a bit like FRIGHT NIGHT or MONSTER SQUAD but without any of their charm. It's a film that drunkenly veers constantly between comedy and horror, never staying in one lane long enough to make any sort of meaningful progress. FRIGHT NIGHT works because of its self aware attitude. MONSTER SQUAD is full of personality and wit. NEON MANIACS is just sort of there, on screen doing its thing, periodically offering up some funny throwaway lines or chuckle worthy sight gags (I'm pretty sure the whole “water kills 'em” thing was included just so Mangine could shoot a bunch of cops pulling squirt pistols out of the trunks of their cars). What this film desperately needed was some level of conviction or steadfastness. It never achieves a singular identity. It's just a bag of mixed nuts and bolts.

The opening murder scene is one of the single worst slaughter set pieces I've ever seen in my entire life. Even the lowest of low budget films manage to get “actors” capable of screaming or running away. The characters in this film literally stand still with blank expressions on their faces as the terrible, unconvincing Maniacs shamble over realllllll slowly, barely batting an eyelash when swords are raised and axes are brandished. It takes a special kind of bad movie to make the deaths of close to nine characters in the space of two minutes this incredibly boring.

Oh, would you like some narrative cohesion to go with your melting mutants and disembodied limbs? You would!?

Well, fuck you, you can't have any.

Nothing makes sense in this film. For starters, how old is Natalie? She looks 30. And is Paula, the mid-20s tomboy, supposed to be a freshman? Are they even in high school? They have to be, right? Otherwise why would Steven's band be playing a concert in a high school gym? And is it Halloween? It has to be, otherwise a costume party wouldn't make much sense. And why do the local police not seem at all concerned about the disappearance of over a dozen people in their city? Where are Natalie's parents this entire time? Why doesn't anyone seem bothered by the fact that there are Mutant-Maniac-Monsters trying to kill them? When not hallucinating blood showers or dodging Maniac assassination attempts, Natalie just relaxes all day by her pool and Steven moans about his oh-so-rough life delivering groceries. And why the hell are Natalie and Steven the main characters in this movie anyway when it's Paula, the Tommy Jarvis of this film, that does all the damn work in moving the story forward?

Seriously, how useless are Natalie and Steven? During the attack on the school, the lovebirds decide to hunker down behind a door fitted with a very large, easily breakable window and have sweaty, noisy sex on the classroom floor while Paula - you know, the only person on the planet who believed Natalie's story, went out her way to confirm the existence of the Maniacs, single handedly killed one of them in her bathroom and just saved dozens of lives by whipping out a fire hose in the gym? - is left alone to save the lives of her fellow students. Screw, Paula. Fucking try hard.

But I know what you're really wondering about. How the hell are there mutants living under the Golden Gate Bridge, where did they come from and why are they killed by water? Want to know the answer?

Well, fuck you, you can't have it.

Look, I'm not playing hard to get here. The film doesn't explain a single thing. Mutants live under the Golden Gate Bridge and they can be killed by water. It's just a brute force fact. There you go. Enjoy the movie. I dare you.

Posted by David Grant at 12:10:00 AM
Email ThisBlogThis!Share to TwitterShare to FacebookShare to Pinterest
Labels: Neon Maniacs