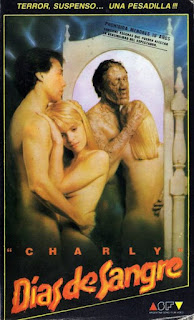 If FRIDAY THE 13TH: THE FINAL CHAPTER epitomized everything studio-released horror films were in the 1980s, the oddly named Argentinian slasher, CHARLY, DIAS DE SANGRE (which translates to the less exotic therefore more ridiculous title CHARLY, DAYS OF BLOOD), stands as a shining example of what a direct-to-video slasher film was in the 1990s. Everything you would expect from a title like this is here. The bad acting, the gratuitous nudity, the sloppy gore effects, a slew of lapse dissolves, stuttering post processing filters, corny in-camera transition effects and a shocking lack of overall professionalism are all present and accounted for. So what if anything makes CHARLY, DAYS OF BLOOD stand out from the majority of schlock shockers? Absolutely nothing. But this isn't a film trying to be anything more than what it is.

And what exactly is it, you ask?

For starters, it's a film entirely front loaded with plot. Charly is an introverted loner, eternally traumatized by the death of his brother when they were teenagers. Charly's uncle, a cop, asks Charly's good friend Danni to take his nephew out to the family getaway spot, a secluded summer home near the woods. The uncle thinks that getting Charly a girlfriend will help shake him out of his psychological funk (I guess it's cheaper than therapy). He even offers to pony up some dough if Danni needs to hire a prostitute or two. But that isn't necessary as Danni's friend Sandra takes an immediate liking to the nerdy, prone-to-vomiting Charly. Along for the ride are Danni's girlfriend, his chum Pablo and Pablo's main squeeze.

When they arrive at the summer home, the film descends into a mix of softcore sex and surprisingly not terrible scenes of goofing around, bonding and romance. While the film never rises above the level of TV episodic teen drama, the characters are all rather likeable. This, perhaps more than anything else, is where this film kind of stands out from the crowd. At the halfway mark of this mercifully short film, I didn't want to strangle a single character or ram a tent spike through their genitals. It was routine, comfortable, completely predictable fluff and fucking around. Again, surprisingly not terrible, even with the bad acting and Casio keyboard score.

But then the horror elements started leaking through and any good will the film accrued went right down the toilet.

Random POV shots start cropping up, all accompanied, for some unexplained reason, by the sounds of whining cats (or rather, humans imitating the sounds of whining cats). Speaking of cats, Danni finds one strung up from a tree and given the budget of this film, I really wouldn't be surprised if director Carlos Galettini actually killed a real cat to save a peso or two. Charly begins having nightmares, someone tries to attack Sandra and finally, in a plot development so out of nowhere that it literally upends the entire film, Charly's brother (I think; more on that in a moment) shows up, his face looking like someone glued bacon all over it, and people start dying in rapid succession.

It's the horror elements that really sink this otherwise not-so-terrible ship. Aside from an opening sequence of three buck-nekkid bubble bath babes being brutally butchered by a mysterious mouth-breathing maniacal murdering madman, CHARLY, DAYS OF BLOOD plays hard to get with the horror for well over 45 minutes. Yes, the standard horror movie POV shots are there and a few bits of hallucinatory weirdness crop up to remind us that this isn't going to have a happy ending, but the full blown descent into slasher movie conventions at the end feels awfully abrupt. In fact, it feels outright forced, like the director forgot he was supposed to make a slasher film and quickly tried to rectify the situation by typing “and then they all die. The end”.

Worse, there's absolutely no attempt to tie the slasher side of the film into any kind of logical framework. Who is our bacon-faced killer? Is he the ghost of Charly's brother? Did his brother never die in the first place? Pablo notes that the killer is wearing Charly's clothing so maybe the killer is just Charly in disguise? That certainly seems the most probable, but the film never bothers to hint that Charly, traumatized though he may be, is actually capable of murdering half a dozen people. And what's the deal with the three dead chicks from the beginning of the film? It doesn't seem to tie into the film at all. Is it relevant that the cop in charge of the crime scene investigation is Charly's uncle? Was that whole triple homicide scene only in the movie to bump up the amount of full frontal nudity?

I don't know the answer to any of those questions. The film simply doesn't care about closure or explanation.

But really, does it matter? Does it matter if nothing here really makes sense logically or narratively? No, not really, because CHARLY, DAYS OF BLOOD is a paycheck movie. It has no higher artistic motivations or desire to be taken seriously. It offers up exactly what horror fans would want from an impulse rental at their local Blockbuster. Moreover, it's an “in the moment” film, one where individual elements need not fit into any kind of larger framework because the film simply isn't concerned with anything more than grabbing your attention and holding it just long enough for you to not turn it off.

With its near constant parade of jokes and exposed breasts, the film managed to keep me watching, even if it had no real sense of scene-to-scene progression. The slasher film attached to the end had a few interesting bits (Sandra, the final girl of the piece, is brutally murdered early on, an oddity in these kinds of films, and the reversal from “slasher trying to kill teens” to “teens trying to take down slasher” was a welcome change of pace), but it really does feel like an afterthought. The only reason I made it that far into the film was because the moments that worked overshadowed the moments it fell flat. When the credits rolled, I didn't feel angry or pissed off that I wasted my time. I didn't feel blown away or impressed either. CHARLY, DAYS OF BLOOD is not bad or good. It's serviceable and really, that's all it wants to be.
Posted by David Grant at 11:47:00 PM
Email ThisBlogThis!Share to TwitterShare to FacebookShare to Pinterest
Labels: Charly Days of Blood, Charly Dias de Sangre, slasher