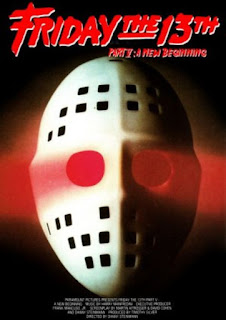 I sometimes say that to myself in the morning. I hop out of bed, stretch out my legs and wipe the sleep from my eyes. I look out the window at the shining sun, listening to the sounds of birds chirping and kids playing in the distance. Yes, indeed, this day is a new beginning. A fresh, new day filled with the possibility of adventure. Then I spend the rest of my day doing exactly what I did the day before, playing video games and scratching my balls.

After serving up THE FINAL CHAPTER, Paramount shit out FRIDAY THE 13TH, PART 5: A NEW BEGINNING. It might as well have been called LOL JUST KIDDING. No one in their right mind thought that the FRIDAY THE 13TH franchise was dead and buried. There was too much money to be made. At this point, going to see a new installment of the franchise was like saying “bless you” when someone sneezes. It was a mindless, compulsory activity. A new installment came out and we all flooded the cinemas like sheep. We didn't really want to see it, but we all kinda had to. Paramount knew this so we got another one and another one and another one. But this was A NEW BEGINNING. Holy shit, it could be anything! How exciting!

Then the movie begins with Corey Feldman watching two idiots get killed by a freshly reanimated Jason and we all thought “oh… never mind”.

But then it turns out to be just a dream so we all thought “oh… never mind”.

Maybe this WAS going to be different.

It (almost) all goes down at Pinehurst, an outdoors treatment center for disturbed teens (all of whom are in their late 20s). Here, the nut jobs can wander around at will, engaging in all kinds of activity from hanging laundry to running away. There doesn't appear to be any actual treatment going on, but at least the kids are not rubbing feces all over the walls and throwing TVs out of windows. I suppose that counts for something, right? And what teens are these, you ask? Let's see. There's two perpetually horny teens, a guy that stutters a bit, a New Wave chick and a pretty redhead. Nothing really seems off about any of them though. We think they're nuts because we're told they're nuts, even though they act perfectly normal. The only thing really wrong with them is that they're in FRIDAY THE 13TH, PART 5.

But then there's Joey, the doofy fat guy, and Vic, the guy with obvious anger management issues. Now I don't mean to tell the esteemed Doctor Matthew Letter how to run his treatment facility, but it's probably not a good idea to let a raging ball of anger like Vic play with axes. Something bad might happen. For example, Vic might chop Joey up into little bits because Joey tries to force a chocolate bar on him. That's what happens, by the way. You heard that right. Everything that happens in this movie happens because of a chocolate bar.

You see, Joey is an orphan, but it just so happens that his estranged father is one of the EMTs called to pick up his body parts at Pinehurst. The EMT, whose name is Roy, responds to his son's death with a slight overreaction. Roy gets himself a Jason Voorhees outfit and goes on a massive killing spree, butchering the high holy fuck out of every person he comes across. Hell, one of the most interesting things about the film is how Roy manages to find the overalls, a bald cap and even the right kind of machete, yet he couldn't quite get the right mask. This one has blue paint instead of red paint. I would have loved to have seen a scene of Roy in a department store picking out his overalls, hitting up a costume shop for the bald cap and then heading down to the sporting goods store to find out, gasp! shock!, they don't have the right mask in stock. Frustrated, he has the guy behind the counter check the back room, maybe even call another store to see if they have one in stock. He's told they could order one, but it would take two weeks. Roy gives it some thought. Maybe he could put off the massacre a little bit longer. Maybe he could just wear a fencing mask. Maybe a catcher's helmet! Ooh, they're neat. Decisions, decisions.

Now bear in mind that in this film's universe, Jason Voorhees is actually dead. Like DEAD dead. Like Princess Diana dead. There's a hilarious bit of dialogue at the end of the film where the Sheriff mentions that Roy decided to use the Jason Voorhees identity as cover so no one would know it was him. Brilliant idea, Roy. Assume the identity of a dead killer so no one would know it was you. Were you planning on leaving witnesses? I would suspect that Roy figured he would actually kill them all. So why bother dressing up?

It's because we need Jason in the film, isn't it? I mean, we can't actually live up to the title A NEW BEGINNING, right? No, we need good ol' hockey masked Jason wandering around butchering people. We're meant to think that the killer is Tommy Jarvis so when -

Wait… I did tell you about Tommy, right? See, Tommy is the newest addition to Pinehurst, freshly arrived from a proper mental institution. He's supposed to be about 17 in this film but the actor portraying him has a near constant five o'clock shadow. No matter though because Tommy is really only here to create a kind of continuity between the fourth installment, the one where he cut Jason to ribbons with a machete, and this film, the one where he does fuck all but beat up a couple of side characters.

The use of Tommy Jarvis in this film is hands down the biggest failure. Tommy is all but mute, only ever muttering lines like “sure” and “don't”. He is obviously set up as a red herring (nearly every murder scene ends with the film cutting to a close up of Tommy's face) and I personally find that to be a horribly tragic misuse of the character. Tommy should have been the hero of the piece, not a suspect. The start of the murder spree should have signaled Tommy's involvement in the narrative, not his distancing from it. Right before the main shit goes down at Pinehurst, Tommy runs off. He doesn't show back up until there's only 15 minutes left in the film. The final face-off between Pam, Dr. Letter's busty assistant, and Roy/Jason happens in a barn. Tommy makes his all-important entrance, matched in editing to the sound of clapping thunder. It's a perfect entrance. In an ideal world, Tommy would have seen Roy/Jason standing there. He would have turned to run or just hesitated. Finally mustering up the courage, Tommy rushes forward, meeting his foe head-on in a final fight for closure.

Too bad that in the film Tommy just stands there motionless and allows Roy to cleave him across the chest. It's a waste of a great moment. It would be like Ripley entering the hangar bay at the end of ALIENS, all decked out in the exosuit, but instead of charging forward to protect Newt, she just farts and falls over.

Not that any of the other characters are used properly or treated well either. Hell, the best character in the entire film is Demon, the older brother of Reggie, the stereotypical screaming kid. Demon is an African American punk rock brutha with a Jheri curl that lives in a trailer park with his pot smoking squeeze. I have no fucking idea who came up with such an absurdly out of place character, but thank god someone did. Demon is a breath of fresh air in this film. He looks ridiculous. It's like someone dressed Easy E. up like Rob Halford. Even better, Demon and his girlfriend sing a fucking doo-wop ditty while he takes a shit in an outhouse. But because this is a FRIDAY THE 13TH film, they have to kill him off just as we're falling in love with him, robbing the film of its only interesting character. They don't even let him wipe his ass before they impale him. For shame, film. For shame.

Well, we still have Ethel and her idiot motorbike-riding son to keep us company for a little bit. They feel just as out of place in this film as Demon did, two backwoods Southern stereotypes who drool and scratch their way across the screen. There's Billy and Lana, the most unattractive couple in cinematic history, who were probably on their way to film some lousy cocaine-fueled amateur porno in a seedy motel room before they ran into Roy and his ax. There's the two greasers trying to get their car to start on the side of the road because they're obviously late for a midnight showing of AMERICAN GRAFFITI. Why is every side character in this film more interesting and memorable than the lead characters? Hell, the stuttering dipshit that tells the pretty redhead that he'd like to p-p-put his p-p-p-enis inside her b-b-butt is a more relatable and likeable character than Tommy motherfucking Jarvis, the apparent star character of the franchise.

Oh but what am I doing? Talking about characters in a FRIDAY THE 13TH film. Pfft, silly me. People don't watch these films for the characters! They watch them for the uhh… They want them to see for the uhh… It's because uhh… Hmm.

Why do people watch this shit again?