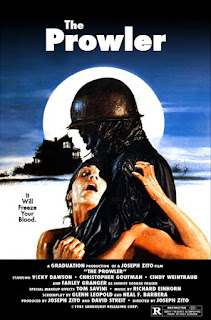 THE PROWLER takes place in the fictional town of Avalon Bay, a cozy little slice of normal on the coast where nothing much happens, so little in fact that the Avalon Bay police force consists of a single sheriff and his deputy.

It's like any other town really, except that back in 1945 two unsolved murders took place. As a result, there has been a 35-year moratorium on college graduation parties. Does that sound like a bit of an overreaction to you? Well, the whole damn movie is built on an overreaction. See, the two people murdered that night were Rosemary and her boyfriend Roy. Their killer was Rosemary's ex-boyfriend, a soldier recently returned from fighting in World War II. Rosemary sent the poor guy a Dear John letter, informing him that she simply couldn't wait for him to return home. I mean, what else was there for this poor guy to do? Move on with his life? Nah, better impale them both with the pointy end of a pitchfork. It's only rational. A fella needs closure in his life.

It wasn't uncommon for horror films to use Vietnam vets for their antagonists. They were usually portrayed as mentally unstable, disillusioned lost souls so used to violence on the battlefield that they had a hard time shaking their murderous urges after returning home. I was more than a little curious as to how THE PROWLER would use a World War II veteran in its narrative, only to find out that it didn't plan on using that angle at all. It was just a bit of fluff, a reason to use a period setting during the opening pre-credits sequence. Instead, we just have yet another slasher film where a party acts as a trigger for someone carefully hiding a past trauma, resulting in a handful of deaths. Yay.

In all honesty, those deaths are the only reason to even watch this horrible film. Tom Savini's excellent splatter effects make up for 99% of everything good about THE PROWLER. They're suitably nasty, still convincing and actually quite mesmerizing to behold. But everything else about THE PROWLER is an unmitigated disaster. Once the opening credits stop rolling and we're into the film proper, we meet our two leads, Mark the flirty deputy and Pam the boring blonde. Mark is being left in charge while the sheriff (played by Farley Granger) goes fishing for the weekend. The sheriff mentions that there was a murder committed one town over and there's a possibility that the killer might pay their town a visit but nahh don't worry about that. Evening comes and the dance kicks off.

While everyone is having a good time, Pam's roommate and her boyfriend are both killed by the titular Prowler, a dude dressed up in WWII gear. After having punch spilled all over her dress, Pam goes home to change, not noticing the two dead bodies in her bathroom. She's chased a bit by the killer, but is rescued by Deputy Mark. And thus begins the arduous murder mystery angle of the film. They head to the home of Major Chatham, a respected town elder, and start looking around inside, unaware that the killer is inside the house.

Now, this sequence is the perfect example of why THE PROWLER is such an abysmal waste of time. This sequence lasts a full eight minutes. It begins with Mark and Pam entering the home. We're given a few quick glimpses of the killer hiding in an upstairs room. As Mark wanders around, Pam discovers some pictures of Rosemary. Not once does anyone run into the killer. Not once are we shown the killer stalking either character. Not once does anything actually happen during these eight minutes. The entire sequence is only there so we can learn a single throwaway bit of lore, that Rosemary was the daughter of the Major. I can only speculate, but I think that this sequence was meant to set up the Major as a suspect. But that makes no sense at all. We've seen the Major already. We know that he's pushing 80 and is in a damn wheelchair. So what the hell was the point of those eight minutes?

The entire film is padded out with junk like that and when it isn't padded out with filler, it's just crammed full of shit that makes no sense. At some point, the killer digs up Rosemary's grave, removing the body and replacing it with the body of one of Pam's friends. Why? Who knows? The film never explains it. Worse, Pam later discovers Rosemary's body (well, skeleton actually) stuffed inside a chimney. Again, why? Why did the director feel the need to lavish attention on two teens making out in the basement, the camera going full-on Killer Cam readying us for some more gory action, only to cut away from those teens, never to return? Why does Otto, the simple minded red herring of the film, just show up at the end, shotgun in hand, to save Pam? How did he know she was in there? Was he just running through the streets with a shotgun, randomly checking every other house until he found her? Why the hell is the killer using a pitchfork of all things? Do people living on the New Jersey coast line regularly have pitchforks in their homes?

I could excuse most of the idiotic shit this movie throws at the screen if it were at least engaging or entertaining but it simply is neither. It is a mind-numbingly boring affair, padded to the extreme with suspense sequences that fail to impress, characters without personality and a central mystery that goes completely unexplored. The oh-so-ironic finale just happens because the film needed to end, not because of any kind of narrative crescendo. THE PROWLER is bottom of the barrel, brain dead slasher inanity, a movie without pulse or purpose, garbage garbage garbage.

Was that scene intended as homage or was it just a rip-off? It doesn't actually matter as its inclusion completely backfired. I wasn't panicked while watching it. I wasn't on the edge of my seat. I was simply reminded that I could be watching a movie that works, instead of a movie too lazy to even try.
Posted by David Grant at 9:32:00 PM
Email ThisBlogThis!Share to TwitterShare to FacebookShare to Pinterest
Labels: Garbage, Rosemary's Killer, slasher, The Prowler