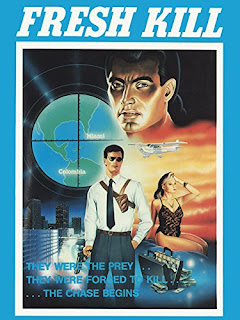 FRESH KILL begins with a series of pans, like a cheap-o travel commercial. A shot of a busy Chicago street pans over to the beautiful Buckingham Fountain. A shot of buses pans over to the Chicago Tribune offices. Hard working people on their way to work. Pan over to... pizzerias? A shot of the bustling night life pans over to a Walgreens? Was Walgreens something people strongly associated with Chicago in the late 1980s? Did they just run out of landmarks?

We meet Allen, a struggling actor so full of himself that all he ever does is talk about how successful his upcoming trip to Los Angeles is going to be. Sayonara, you fucking plebs! I'm gonna be famous! But before you can say “humble pie”, poor stupid Allen's dreams are shattered. Due to a mix-up, the part Allen thought he was going to land upon arriving in LA was for a midget (their words, not mine). So Allen gets a job working at a busy LA butcher's shop, something to help him pay the bills while he waits for his big break.

One night, a young blonde comes barging into the shop after hours. She's running from two goons. Allen, the nice idiot he is, lets her stay and the two hit it off. She has a relative working in the film industry and would be happy to pass along his head shot and resume. Once the coast is clear, the blonde, Leona, takes off only to show up again a few hours later, this time with friends. And by "friends" I mean the two goons she was running from earlier. They have guns and bad attitudes, desperate to find the two million bucks that Leona stole from someone named Manny, a drug dealer Leona used to have a relationship with. Even though Allen is rightfully scared out of his mind, he manages to kill one of the goons with a big sharp knife. The other one… well, Leona brains him with a meat cleaver.

And so begins the single most forced and unbelievable romance ever captured on celluloid. They head off to Leona's mother's house to watch what looks like a snuff film before having awkward sex. From that point on, the two dodge gun toting goons over and over again until Manny kills Allen's parents and kidnaps Leona. Finally at his breaking point, Allen wrangles together a few friends and they lay siege to Manny's hideout.

That's FRESH KILL, folks, and while I know it sounds like it might be fun, it isn't.

The single biggest problem with FRESH KILL is that I couldn't hear a goddamn word anyone said throughout most of the film. This is a low budget, shot on video quality affair. What that means is that anytime characters leave a small, confined space, you might as well stop paying attention altogether. No effort was made to ADR anything. After discovering Leona's mother has been killed, our heroes decide to seek solace and refuge in a local pizzeria(?). What follows is a three and a half minute conversation between Allen and Leona. What they're talking about is anyone's guess. We see them talking. We see their lips move. We know they must be talking about something really fucking important as Leona's mother just had a knife shoved through her throat, but for some reason writer/director Joseph Merhi decided not to bother doing any ADR. So enjoy three solid minutes of nothing but environmental noise. Dishes clanging, small talk from off screen, someone calling out an order…

This happens constantly and it isn't a problem you can fix just by turning up the volume. So much dialogue wasted, so many words lost in the cacophony of the busy LA streets. You would think a writer/director would give a shit about his audience being able to follow along with the story but nope, absolutely not the case here. But strangely enough, when our love birds decide to take an inexplicable helicopter ride and have a nice romantic lunch beside a giant mound of dirt somewhere in the valley, Merhi decides to dub in what sounds like one of those “sounds of nature” meditation tapes over the scene. Unfortunately, the “sounds of nature” tape he grabbed was for the goddamn Amazon rainforest. So the one time the director decided to care about the audio of his film, he fucked it up spectacularly.

Were it not for the inaudible dialogue, the film might have been fun to watch. It's an absurd piece of work. Within the first 15 minutes, we see a hooker stab a child to death for playing keep away with her purse. Every other character we see is either a pimp or a hooker. There's a whole early film subplot about some cranky old woman getting repeatedly screwed over by everyone she comes across. I'm fairly certain Merhi and Co. used an actual police arrest as a backdrop at one point. One of the side characters looks like Richard Branson and constantly name drops movies like DEATH WISH and goddamn ZORBA THE GREEK. In one of the most baffling scenes, Allen tears open a few bags of cocaine, throwing the powder through the air in slow motion while a cheerful, melodic Casio tune plays in the background. The violence is splattery and explicit. And then there's Robert Z'Dar as Manny. His performance is just weird. It's like Z'Dar couldn't decide if he wanted to do a Tony Montana impersonation or a riff on Robert De Niro's Al Capone so he just did both at the same time.

At least I think he did. I don't know. I couldn't fucking hear him half the time.
Posted by David Grant at 12:39:00 AM
Email ThisBlogThis!Share to TwitterShare to FacebookShare to Pinterest
Labels: action, Fresh Kill, Robert Z'Dar, Troma