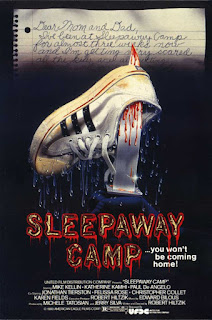 Until THE CRYING GAME came around, SLEEPAWAY CAMP laid claim to the single most shocking pickle shot in all of cinema. The wholly unexpected penis cameo during the final 90 seconds has kept the film floating around in the pop culture aether for over 30 years. Were it not for that dick, no one would remember it at all. Hell, I barely remembered anything about it and I've seen it multiple times as a kid. As hard as I tried, I couldn't wrangle up any other memories of it. All I could think of was that dick.

So what is this film about? It's about Ricky and his cousin Angela. They've been sent to summer camp by Ricky's possibly mentally unstable mother. While Ricky fits right in (he's a regular), Angela has a tougher time. She's quiet, shy, weighs about 60 pounds and is 75% eyes. She just sits and stares, those doe eyes taking in everything around her. This naturally pisses off her bunk mates, specifically Judy, Ricky's ex-summer camp fling-turned-bitchy prima donna, and Meg, one of the counselors. The boys don't treat her any better, constantly teasing her, chucking water balloons at her, etc. Except for Paul, that is. He takes a shining to Angela and Angela soon takes a shining to him.

Unfortunately, everyone's fun is about to be ruined. As Angela takes more and more abuse, people begin dying. At first, it's just the pedophile chef. After the fat sleazeball tries whipping his junk out in front of Angela, he's horrifically scalded by a pot full of boiling water. Later, one of the boys taunting Angela is found drowned. Another is locked in a bathroom stall and killed after someone unseen tosses a swarming beehive through the window. But it couldn't possibly be Angela could it? She's so innocent and clearly the hands we see during the murder scenes are a boy's hands. So is it Ricky?

I'm sure you already know who the killer is because the ending of SLEEPAWAY CAMP has become one of the most iconic final scenes in all of horror. It's a whopper of a twist, that is for damn sure, even if it's absolutely ridiculous and, to be honest, completely unnecessary. But what about the rest of the film? Well, I'm glad you asked. It's pretty great. Not for the reasons you might expect though. In terms of graphic violence, SLEEPAWAY CAMP is nothing special (though a single death, a fatal rape via curling iron, goes a bit too far for my tastes). The deaths are somewhat memorable for being a bit campy and absurd, but graphic they most certainly are not. The film isn't especially spooky either.

But what the film does right is that it gives us likeable characters. There are no 21-playing-16 actors here. The characters are largely kids played by actual kids. They talk like kids, behave like kids… It's one of those rare slasher movies where the characters feel like individuals rather than simple, babbling stereotypes (even if some of them are, like snarling, bitchy Judy). It reminds me a bit of THE BURNING, another summer camp slasher film filled with dozens of characters, all of whom are distinct entities. The film suffers a bit when we need to spend time with the adults at the camp. Mike Kellin's Mel, the guy in charge, is a gruff bore who quickly descends into almost incomprehensible paranoia as the film goes on. Many of the counselor characters are interchangeable personality vacuums that are never developed. The single most despicable character in the entire film is the sleazeball chef who refers to all the young girls as “baldies”, your typical movie pervert. But the time away from the young cast is relatively brief and that is to the films great, great benefit.

But the single best thing about SLEEPAWAY CAMP is Felissa Rose. Her portrayal of Angela is spot on, just wide eyes and an unblinking gaze. She pulls off creepy well, but she also pulls off unbearably sweet perfectly. Look, if you've ever seen a slasher film before, you know full well that Angela will be revealed as the films killer. It's too obvious, so obvious in fact that the films writer/director Robert Hiltzik must have felt compelled to double down on the reveal. You see, Angela wasn't always Angela. She used to be Peter. When her father and sister were killed in a (completely unconvincing) boating accident, Peter was sent to live with his aunt, Ricky's mother. Abandoned by her husband, Ricky's mother went a little nuts, dressing Peter up as a girl and calling her Angela. How Ricky never found out about this (or does he know?) is not explained. In fact, nothing about the final reveal is ever explained. It doesn't fit at all with the rest of the film in any satisfactory way. Sure, it's jaw dropping and interesting, but it hurts the character of Angela much more than it helps.

It also makes the subtext of the film a mess. As Angela is making out with Paul, she has a flashback to the time she and her brother watched their father lying in bed with his male lover. In an ordinary slasher film, this would have been some kind of traumatic shock. But what we see are the two siblings chuckling, confused maybe but certainly not traumatized. With the final reveal of the film in mind (Angela is found naked near the lake, cradling Paul's severed head in her arms. She stands up and… well, dick), what are we to make of that flashback? What are we to make of anything really? Is the film suggesting that homosexuality is responsible for the killings, that Angela's young childhood with two gay parents somehow traumatized her (that would be an odd angle for this particular film to take as it is rife with deliberate homoeroticism)? She clearly has feelings for Paul, so are we to assume that Angela, who is really a boy, is somehow driven to kill Paul because of some internal conflict with her sexual orientation? Or are we to look at the film in the same way we look at Dario Argento's FOUR FLIES ON GREY VELVET, another film about a child raised as a different gender, a trauma that has led to a violent revolt against the opposite sex? Who knows? I sure don't.

The final reveal just does not feel congruous with the rest of the film. Of course, that's only really a problem if you care about such things and honestly, in a slasher film, I don't. There's more than enough nonsense going on in the film that I can take the twist ending as just another bit of WTF? fluff. I mean, twist endings are particularly tough to pull off right in any genre. If you think about it, Bruce Willis would have sussed out that he's dead well before meeting Haley Joel Osment. The final twist in THE VILLAGE only works if you ignore the fact that it makes more sense for one of the elders of the village, all of whom know the whole thing is sham, to go wandering into the woods instead of sending a blind girl who may or may not ever return with the medicine desperately needed to save Joaquin Phoenix's life. The twist at the end of THE USUAL SUSPECTS renders the entire film moot and the twist at the end of HIGH TENSION renders that film completely impossible. But hey, they're neat endings (some more than others) so whatever.

What I care most about with my slasher films is this: are they entertaining? Do they deliver the experience I enjoy? SLEEPAWAY CAMP earns a solid “yes” on both counts. If you want to spend some time with the story of a psychopath suffering from a gender identity crisis who kills some kids, this film is a far more enjoyable way to indulge yourself than, say, reading The Wasp Factory. But if you're looking for explicit gore and nudity, look elsewhere. Just put the film on, kick off your shoes and enjoy one of the best early 80s slasher films around. Soak up the charm and the weirdness of the whole thing. Trust me, you'll like it. And if you don't?

Well, don't blame me. I didn't make it.
Posted by David Grant at 2:25:00 AM
Email ThisBlogThis!Share to TwitterShare to FacebookShare to Pinterest
Labels: Horror, Slasher film, Sleepaway Camp