THE GIALLO PROJECT - NIGHT OF VIOLENCE 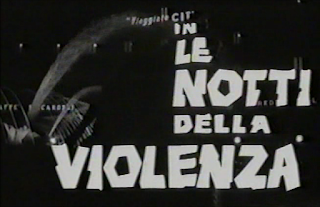 A gorgeous and half nude blonde, a series of creepy phone calls, a mysterious man lurking in the shadows outside… Roberto Mauri's NIGHT OF VIOLENCE has the typical routine thriller set-up. That gorgeous blonde is named Carla, a well-off prostitute. After saying goodbye to one John, she's off to meet another. Along the way, she blows a tire, stranding her in the middle of nowhere. As she frets about on the side of the road, a man approaches, offering to fix her flat. Although they exchange some pleasantries, the encounter ends in violence.

We learn a few scenes later that the now-deceased Carla was the daughter of an ambassador. Naturally, this attracts the attention of the press and puts a good bit of pressure on the local police. What begins as a simple tale of tracking down a killer becomes much more complicated as multiple women (and a few cops) are attacked in the city, each attack seemingly the work of a different man. And then there's the whole prostitution ring. And the drug racket. And Carla's angry sister who decides to stop waiting for the police to break the case wide open and takes matters into her own hands.

NIGHT OF VIOLENCE has its fair share of triumphs. For starters, the film is beautifully shot with rich, Expressionistic black and white cinematography. It has a fantastic jazz score written by Aldo Piga. It boasts a top notch cast of tough guys and pretty faces. The climatic moments of the film are some of the best around. But what it is lacking the most is focus.

Ostensibly, this is a murder mystery film. After all, we start the story with a single woman who ends up dead. She turns out to be rich, her father an ambassador (which usually signals political intrigue in these kinds of films). We have a steadfast, determined police inspector on the case. That is a typical set-up, the kind that fuels many thrillers. But thrillers can't just bounce from A-B without complication, right? That would make things too simple. That's where the prostitution ring comes in. Could Carla's death have something to do with that?

As swiftly as the question is raised, it is answered. No, it does not. But then we learn that the man Carla was going off to meet, another man of wealth, is a drug runner. Maybe THAT has something to do with Carla's murder? Again, the possibility is brought up and then swiftly dealt with and again, the answer is no. We're about half way through the film before we return to what got us here in the first place. Women begin to be attacked, usually in public places. The attacker is always chased off, the women always surviving. The victims, all prostitutes and therefore all tied by vocation to Carla, all give different descriptions of their attacker to the police. But what these attacks get us here are a series of brief police interrogations and one visit to a film set. It isn't until the final 15 minutes of the film that Mauri gets his narrative back on track and NIGHT OF VIOLENCE finally becomes the thriller we were promised all along.

Put simply, we spend too much time dealing with side stories here and not enough time actually exploring the central mystery of the film. Many of these side stories are nothing but distractions anyway. We know that Carla's John-in-waiting didn't kill her so why are we to suddenly think he's a suspect? Well, Mauri wanted to include a subplot about a drug ring, that's why. We spend a bit of time with Linda, another prostitute, and her physically abusive pimp. They have a disagreement that leads to him slapping her around, telling her to remember “what happened to Carla Pratesi”. But again, we know he isn't the killer so what exactly are we doing spending time with these people? Linda's story is dropped, the drug ring goes nowhere, nothing at all is done about the prostitution ring… Worse, the questions we want answered, the plot threads we want to be explored, are ignored completely throughout the film. Why did Carla turn to prostitution at all? She's already wealthy with a respectable family so how did she end up turning tricks? Who was it that was calling her on the phone the night she died? I don't know. The film never tells us.

And that's a damn shame because when NIGHT OF VIOLENCE focuses on the mystery of Carla's murder, it's a damn good giallo (though with a police inspector as its lead, the film falls more into the realm of the poliziotteschi than the giallo). The reveal of the killer's identity is one of the films major strengths. It's weird, even by giallo standards, if only because it presents us with a killer that is neither someone within Carla's social circle (like in your typical Poisoned Past narrative) or someone who is known by the detective (as it would be in the Amateur Detective narrative). It's just some random stranger we only get to spend time with during the final confrontation.

The killer is revealed to be an Italian former athlete scarred by radiation when the Americans bombed Japan in the 1940s. He returned to Italy to find his home gone, turned into a market, and his family moved on. As he wandered Rome, depressed and lonely, he found an abandoned building filled with movie props, most notably the life casts of several Italian actors (diegetic actors, unfortunately; no real world actors). Carla's murder was a complete accident. He never meant to kill her, only rape her (which is disgusting enough, to be honest). His confrontation with Carla's sister in the final scenes of the film turn him into a sympathetic creature, if only because his motives are so pathetic. He eventually saves his captive's life before committing suicide, harmlessly firing shots into the air so the cops will fill him with bullets.

There's a whiff of something in NIGHT OF VIOLENCE, the hint of some forgotten bit of subtext. There's flirtations with the idea that wealth requires the abandonment of virtue, and that society turns a blind eye to the crimes of the wealthy and the famous, especially if those crimes are against women. The pimp that smacks Linda around is incarcerated not because he beat her up, but because he recently robbed a store, an act he already served time for committing. When the inspector and his men arrive to a film set to interview an actor identified by a victim, the cops treat him with respect, apologizing for having to question him at all. Scenes like that lead me to believe that what Mauri and his co-writer planned NIGHT OF VIOLENCE to be was something more serious minded and narratively complex. Unfortunately, at some point all of that was gutted and what we got instead were pointless drug rackets and fisticuffs.