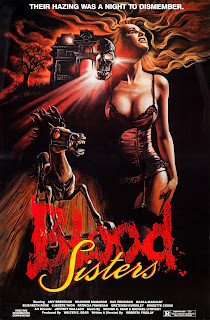 Michael and Roberta Findlay didn't invent the roughie (that nasty slice of exploitation cinema that primarily focuses on sexual violence towards women) but they sure did refine it. It's tempting to think of all the films produced by the couple as loosely autobiographical. The Findlays didn't enjoy a happy marriage and they certainly didn't produce happy films. They were full of sexual longing and sexual repressions. Even the sex scenes, usually of the softcore variety, were rarely without an element of brutish violence. The lives lived by their characters were lonely, damaged and falling apart, often racked with psychological agony. Compared to their roughie forebears, David Friedman and Joseph Mawra, the films created by the Findlays often felt like a walk though a very personal hell rather than simple tawdry exercises in cheap sleaze.

Their most famous creation no longer bears their names. Their low budget, shot in Argentina exploitation film SLAUGHTER, loosely based on the Manson Family murders, was shelved for a number of years after its completion in 1971. It wouldn't see the light of day until 1976. Reedited and released with a newly filmed ending, SLAUGHTER would be repackaged by exploitation distributor Allen Shackleton as SNUFF, raking in the dough thanks to its controversial “is it real?” ending detailing a young woman's painful on-screen mutilation.

I've been meaning to review some of the Findlay films, especially their earliest output. The wonderfully disturbing late 60s triptych of THE TOUCH OF HER FLESH, THE CURSE OF HER FLESH and THE KISS OF HER FLESH are required viewing for anyone interested in the roughie and THE ULTIMATE DEGENERATE ranks up there with James Bryan's THE DIRTIEST GAME IN THE WORLD on the scale of pure sexploitation weirdness. But alas, here I am, a victim of my own To Watch pile. The film I need to review is one of the last of Roberta Findlay's films, the one nobody remembers, sandwiched between the far superior (but still not great) TENEMENT and PRIME EVIL. The film I need to review today is BLOOD SISTERS.

On the surface, this tale of a group of sorority sisters forced to spend the night in a supposedly haunted home feels like a quasi-remake of the Linda Blair vehicle HELL NIGHT. But upon further inspection, it's even more of a mess than that loathsome film. The similarities don't just end with the premise. Both films feature a handful of crack-ups hiding plastic Halloween props and tape recorders around the house prior to our antagonist's arrival. Both films then devote an ungodly amount of time to our characters wandering around the house, investigating and debunking all the juvenile scares left for them to discover. It was a horrible waste of time in HELL NIGHT and it's a horrible waste of time here. It isn't a narrative or a story. It's filler. We know the spooky noises are only a tape recorded prank. There's no fun or scares to be had in watching people discover what we already know.

HELL NIGHT had its characters fall prey to the last surviving member of a degenerate family, a monstrosity in overalls that has been hiding in the house for decades. BLOOD SISTERS goes the more familiar slasher route. We see a flashback early on, a young boy stomping his feet when a young girl refuses to show him her 7 year old breasts. We then see someone shotgun a prostitute and her john to death in a brothel. The house our characters are staying in is, surprise, the brothel, long since converted into just another abandoned house. The place is supposedly haunted by the spirits of the prostitutes that were shot to death that night. To our surprise (and theirs), the place actually IS haunted. Periodically throughout the film, a poorly superimposed ghost will manifest in a hallway before walking through a wall. And what exactly does that have to do with the story? Absolutely nothing. No one ever interacts with these ghosts. No one is acknowledged by them. They just wander down a hallway every once and awhile.

By the 45 minute mark of this less-than-90-minute movie, you might just start wondering what this film was supposed to be about in the first place. Then a killer shows up, wobbly fake knife in hand, and you remember. That's right! This is supposed to be a slasher film! And just like that, everyone begins to die in a rushed fashion. We spend so much time on the early game Scooby Doo bullshit and the tacked on ghosts that when the film actually begins to act like a slasher film, we have to do all the stabbing, shooting and choking at warp speed. No stalking sequences, no carefully choreographed set pieces, no suspense… It needs to happen and it needs to happen fast.

Thankfully, the stabby bits are bloody and cruel, and are often prefaced by a bit of nudity. But unfortunately, it's all for naught because I didn't give one solitary shit about the people on the receiving end of the violence. For all the films flaws, the performances are the chief offender here. They are completely incongruous with the way the characters are written. The smart-aleck character comes off as needlessly sarcastic, the serious minded character comes off as bitchy and the comic relief character is played completely straight. You get the sense that Findlay was trying to create a self aware kinda-sorta campy spoof but no one else got the joke (or Findlay didn't explain it well enough). I can look past the sorority pledges all being in the mid-30s. I cannot look past tone deaf performances. They simply sap all the energy out of a film already on life support.

This really should not have been the first Roberta Findlay film I reviewed for this site. Her filmography is packed with far more interesting, much more subversive films that this. But as I said, I have a To Watch pile to get through. BLOOD SISTERS was next on that pile so it was next to be reviewed. I'll correct this horrible tragedy at some point, I'm sure. All I can say is this, don't read this review and think BLOOD SISTERS was the norm for Findlay. It isn't. It's just an example of how badly an exploitation maverick can stumble when they're forced to play safe.
Posted by David Grant at 12:24:00 AM
Email ThisBlogThis!Share to TwitterShare to FacebookShare to Pinterest
Labels: Blood Sisters, Michael Findlay, Roberta Findlay, slasher