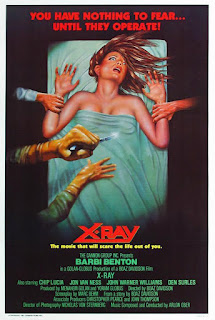 Imagine how much more fun the short lived hospital themed horror films of the early 1980s would have been had THE MANITOU served as their inspiration. Imitators often attempt to one-up the object of their imitation. More blood, more boobs, more everything! THE MANITOU ends with a topless Susan Strasberg having a nice laser beam shootout with a small, greasy Native American shaman and his best buddy, the Prince of Darkness. Man oh man, I would have loved to have seen someone try to outdo that.

But no, the movie everyone was ripping off wasn't an out-there sci-fi/horror cheese fest. It was HALLOWEEN 2. The two best known imitators were VISITING HOURS, a great psycho-thriller that earned a spot on the DPP Video Nasty list, and this movie, X-RAY (aka HOSPITAL MASSACRE). X-RAY is notable for starring Playboy Playmate Barbi Benton. In fact, that's pretty much the only reason anyone even remembers this film. It is 89 minutes of pure hell.

Rushed into production to capitalize on the slasher craze, X-RAY tells the tale of Susan, a divorcee and mother of a young girl. Susan has to go to the hospital one day to receive the results of a standard check up (her work won't give her health insurance until she gets cleared). She tells her boyfriend to wait in the car and heads on in. What follows is a whole lot of nonsense involving a masked killer trying his best to keep Susan inside the building. He shuts off the elevator while Susan is still inside, hacks her doctor to bits, then fucks around with her charts, swapping her clean chest x-ray for one riddled with abnormalities. When Susan finally gets off the elevator, she is forced to wait around while someone locates her doctor. But as her doctor is currently in pieces someplace else, that never happens.

Susan meets two more doctors, the friendly Harry, and the creepy, almost rapey, Dr. Saxon. Harry steals Susan's file, showing Susan that someone is clearly playing games with her medical records. However, Dr. Saxon isn't buying it, believing Susan to be deathly ill. Against her wishes (and probably against the wishes of the hospital attorneys), he forces her to stay for mandatory observation. And while all of this is going on, the whack job in the surgical mask is laying waste to miscellaneous hospital employees left, right and center.

Might any of this have to do with Susan's childhood? When she was real young, maybe around ten, a young boy named Harold left a Valentine's card outside her front door. Watching from the window, Harold saw Susan laugh about it with her little boyfriend, David. Susan left David alone while she went into the kitchen to get some cake. When she returned, she found David hanging dead from a coat rack. She then saw Harold by the now open window, laughing menacingly.

Now if you've been paying attention, I probably just spoiled the ending of the film for you. Sorry, not sorry. Like I said, this film is pure hell, one of the worst slasher films I've ever seen. It's a film that doesn't know what it's doing. Instead of trying to be scary, it just plays scary music over every single scene. Little Susan cutting the cake in the kitchen? Scary music. Susan talking to the receptionist? Scary music. Susan in the elevator? Scary music. Susan getting her blood pressure checked? Scary music. I mean, I get that we're supposed to feel uneasy as Susan sits and/or putzes around the world's most under-lit hospital, but come on now. It screams amateur home video. And worse, when the killer does show up to do some killing, he's the most hilarious character in the entire film, all bug eyed and sweaty, his arms constantly held out 'menacingly' as if he were a kid playing Bela Lugosi's Dracula.

It's also padded to hell and back. Every single thing, even the most simple of actions, takes whole minutes in this film. At one point, because this IS a movie with Playboy Playmate Barbi Benton, Dr. Saxon orders Susan to undress and lay on an examination table. We watch in excruciating detail as Saxon listens to her heart, checks her breathing, takes her blood pressure, fondles her feet, squeezes her legs, taps on her sternum. I understand that “Barbi Benton takes her clothes off” is how this movie was sold to teenagers back in 1982, but there's very little nudity during this otherwise nude examination. So I have to wonder just why in the hell the director thought watching mundane medical assessments, all in nudity-defying close ups, needed this much on-screen attention. Might it be because there is really only about 35 minutes of actual movie in this 90 minute dumpster fire?

Do I really need to answer that question?

That happens to be the single biggest issue with X-RAY. I can forgive the idiocy of it all. I can, despite appearances to the contrary, enjoy dumb shit. But X-RAY makes it really difficult to enjoy anything. It's so lifeless and meandering that getting to the chuckle worthy moments of sheer stupidity feels like an eternity. This isn't a “so bad it's good” kind of awful. It's a “so bad it makes jumping off a building look good” kind of awful. In their attempt at ripping off better slasher films (and not just HALLOWEEN 2 either, but MY BLOODY VALENTINE as well), they left out all the things that make those films better slasher films. We have no character moments here. No suspense or intrigue. No real applause worthy moments of mayhem. X-RAY feels like it is composed of forgotten minutiae, just stitched together from material better filmmakers would have left on the cutting room floor. No scene feels important, just trivial, and the scenes that actually made it into the film feel like botched takes or hastily improvised pick ups.

There is no reason to recommend this film at all, let alone recommend it over any of the other half dozen slasher films it rips off.
Posted by David Grant at 9:40:00 PM
Email ThisBlogThis!Share to TwitterShare to FacebookShare to Pinterest
Labels: Garbage, Hospital Massacre, slasher, Slasher film, X-ray