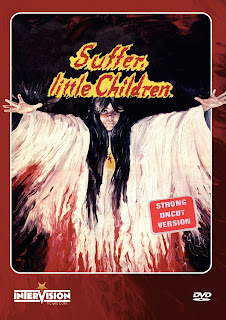 It happens from time to time.

A movie long forgotten will be released on DVD or Blu-ray, usually for a stupidly high price, and go on to be proclaimed a “lost masterpiece” by horror fans everywhere. It isn't unheard of. Strange thing is, most of the time those long forgotten movies were long forgotten for a reason. I was genuinely confused when THE MUTILATOR was released by Arrow and went on to become everyone's new favorite slasher movie. Same thing happened when CATHY'S CURSE, an abysmal demonic kid flick from Canada, was released earlier this year on Blu-ray. That little garbage movie was heralded by the horror community as a lost gem, a real shining example of under appreciated horror films.

If the same thing happens with SUFFER, LITTLE CHILDREN, I'll swallow my own tongue in protest.

Because SUFFER, LITTLE CHILDREN isn't just a bad movie. It's a bad shot on video horror movie with a cast primarily composed of children. That's a recipe for suicidal ideation if I ever saw one. The release of SUFFER, LITTLE CHILDREN comes courtesy of Severin and their Intervision Picture line, purveyors of such fine releases as DREAM STALKER and DARK HARVEST, two films that should have been left to rot in the cellars of VHS collectors. This is NOT an early review of their release. I was not sent a screener to review nor did I get my hands on an early copy. If I did, I wouldn't have watched it. I would have burned it in my backyard.

The flavor text on the Severin website states that SUFFER, LITTLE CHILDREN was “refused a rating” by the BBFC, a claim for which I can find no evidence. There's no mention of it on the BBFC website archives. It states that the “British tabloid press called for it to be banned among the furor of the Video Nasty witch hunts”. I can find no evidence for that claim either outside of a few articles written by attention seeking hacks. In fact, the “Video Nasty witch hunt” was all but gone by the time this film received a VHS release from Films Galore Ltd. in 1985. The next bit of text reads that “many of the children involved in its production were never seen nor heard from again”. I'm not surprised. They probably went into hiding to avoid the shame of it all.

The text on the website goes on to repeat the bullshit “based on a true story” nonsense that starts the film as if it were fact and not just bullshit nonsense. I suppose when you're dealing with such a loathsome and dull flick like this, you have to stretch the truth (if not outright lie) to get people to watch it. That's what Severin wants you to do, fork over an insultingly high cost of 20 dollars to watch someone's lousy home movie from 1983. And yes, for a film like this, 20 dollars is $19.99 too high a price to pay.

SUFFER, LITTLE CHILDREN takes place at the Sullivan Children's Home, an orphanage staffed by two people, a man with questionable taste in sweaters named Maurice and his attractive friend Jenny, a woman with a clear aversion to bras. A young, mute girl named Elizabeth is left on their doorstep one Sunday morning. Though her outward appearance would lead you to believe that Elizabeth is just another child from a broken home, the young girl is actually a demonic little nightmare, possibly even the physical incarnation of the devil himself. Another visitor to the orphanage is Mick, a rock star whose childhood was spent living at the Home. Mick takes a shine to Jenny, much to the chagrin of Maurice. But that is of little concern to us. No, what we're interested in is how Elizabeth seems to be driving the other children to commit terrible acts of violence.

That's the set up of the film. Elizabeth is the devil, the children are her minions, and the adults are their targets. The final ten minutes of SUFFER, LITTLE CHILDREN are the only minutes worth watching. The kids, all armed with kitchen knives, stab and slice some adults to ribbons. If there truly was any real controversy in the British press, it was likely about those scenes. And truth be told, if this were any other film, those scenes would have been memorable. Watching kids commit a wholesale slaughter of adults often is a memorable experience. That's why the opening of CHILDREN OF THE CORN is better than everything else that follows it.

You would expect, of course, for there to be a reversal of the violence at the end of the film. You might even wonder if it would go as far, if not further, than BEWARE! CHILDREN AT PLAY. Alas, it doesn't. In the final five minutes, SUFFER, LITTLE CHILDREN suddenly becomes quite religious. The adults don't overcome Elizabeth through violence or sheer will. No, Jesus shows up and wags his finger at Elizabeth. Yes, that is literally what happens here. Jesus, complete with his crown of thorns (you would think he'd take that off), shows up and finger wags the antagonist to death.

I know, I know, that sounds great. You're probably thinking about pre-ordering the DVD right now, but wait, Dear Reader, because that is the only entertainment this film has to offer.

As previously mentioned, SUFFER, LITTLE CHILDREN is a shot on video horror film. It is also quite heavy on the dialogue. Those two things do not mix well. In some scenes, I could only make out every third or fourth line of dialogue. Then there were the long stretches of conversation, sometimes running for a full three minutes, where I couldn't make out a single word, let alone a complete sentence. There were times when characters would react to something happening off screen, but I couldn't hear what they were reacting to. The film devotes quite a bit of time to the burgeoning relationship of Jenny and Mick, but without subtitles, those scenes were total wastes of time.

And that's because SUFFER, LITTLE CHILDREN plays the same stupid game as virtually every other shot on video movie in existence. Because it's so goddamn cheap, it can't be atmospheric, and because it cannot be atmospheric, it feels the need to compensate by scoring every single fucking minute of the film. The score (if you can call it that) for this film drones over 99% of the film. Worse, it is twice as loud as the dialogue. The only time you'll be able to hear a character speak clearly is during the 30 seconds of silence between track looping. The most basic principle of sound in film is ignored here. What good is dialogue if you can't hear it?

Not that it would have made much of a difference. The entire film is a garbage fire. It was the brainchild of director Alan Briggs and screenwriter Meg Shanks, the latter being the owner and operator of a drama school in Britain, aka the production company behind this film. That should be enough to warn you off. The height of its acting is an unblinking, smiling child wearing eye liner. The height of its visual prowess involves a single stupid strobe light. I mean, it's a home movie, after all, confined largely to a single house. At one point, two characters are attacked by a desk and you can plainly see the person crouching beneath it as it moves. A character commits suicide by stabbing herself in the leg. Scenes don't conclude, they just end abruptly. When the film starts, there's an inter title telling us that the day of the week is “Sunday”, but there no further indications of time passing. Does the whole movie take place on Sunday? Clearly not, but if the film isn't going to play the RINGU game of counting down to some hazy mid-week end point, why bother telling us that it begins on a Sunday?

I could go on and on about the gaffs and the fuck ups and the inconsistencies and the illogic of the narrative, but why bother? I've said too much as it is. This is a home movie made by people who probably never intended it to be seen by the world. And now here we are with its digital home video release date looming while countless better REAL movies languish in VHS hell. There is no justice in the world, folks. It's all fucked. If there is a god, he's probably wagging his finger at us right now.
Posted by David Grant at 11:01:00 PM
Email ThisBlogThis!Share to TwitterShare to FacebookShare to Pinterest
Labels: 1983, horror movie, killer kids, Meg Shanks, Severin, shot on video, Suffer Little Children