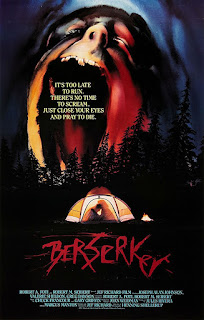 Six substitute teachers college students head off into the woods for a weekend of fun at a rickety, unfurnished shack cozy, romantic getaway spot. As they sit around a campfire, one of the group tells the others all about the “berserkers”, Viking barbarians decked out in masks made from bear snouts. They were the meanest of the mean, barely sane if at all, giant beasts of men who would spill gallons of blood on the battlefields. This turns out to be a remarkably apt tale to tell because there just so happens to be a berserker roaming the woods. He’s already claimed two victims, a kind, elderly couple celebrating their anniversary. Or maybe it was just a large bear that tore poor old Homer and Edna to pieces. After all, why would a Viking warrior be wandering through a modern day forest?

If you’re at all interested in the answer to that question, by all means, give the film a watch. Just be prepared for disappointment. Jef Richard’s 1987 disaster BERSERKER is a slasher film with only four victims, two of whom are killed within the first five minutes. Instead of typical slasher fun, we’re given an odd bit of quasi-supernatural mystery thriller. Are the killings the result of a temperamental brown bear or is there really a berserker lurking in the woods? The resulting film feels like a GRIZZLY rip-off that was retconned into a slasher film just to make the project marketable. The answer to that question is “both”. We get an unhappy bear AND a man possessed by the spirit of a Viking warrior. One or the other would have sufficed.

We do get the requisite nudity and the juicy (albeit poorly executed) murder set pieces, but any slasher appeal the film might have had is lost amid all the bad pacing, horrible characters and overall sloppy filmmaking. The film contains a few pop rock songs, all of which are played in their entirety over montages of vaguely homoerotic tomfoolery (not that there’s anything wrong with that). Our lead character is an insufferable brat, a 30-something man-child who bitches and moans about every little thing. He pitches a fit when the cabin he wanted turns out to be unavailable. He blasts his boombox while his friends are trying to sleep simply because he happens to be bored. It’s amazing he has any friends to begin with. The fact that he survives the film is a major slap in the face.

You know it’s bad when the only real positive I can think of is that the film actually takes place at night. Sure, the production couldn’t afford furniture to place inside the supposed awesome cabin these folks are headed to. Sure, the production couldn’t properly stage the climatic bear vs berserker fight, opting to intercut real bear footage with a man in a loose fitting, utterly unconvincing bear mascot costume. But they didn’t use a single day-for-night shot in the entire film. Kudos for that.

The only two non-college aged (read: in their 30s) characters are a local police officer, played by an actor who looks a bit like Hal Holbrook and moves at 1/4th the speed of a normal human being, and Pappy, the woodsman and caretaker of the retreat. Pappy is played by George ‘Buck’ Flower, a veteran character actor who usually turns in a solid, memorable performance. Here, playing a Norwegian, Flower can barely muster a convincing accent, often sounding more like the Swedish Chef than a Norwegian immigrant. All of this should have accumulated in a minor camp classic. So why is this film not fun at all?

It’s because BERSERKER is poorly made and woefully underwritten. Leaving aside the opening murder of the elderly couple, there isn’t a single drop of blood spilled until the 40 minute mark. After two of the women are messily dispatched, our remaining characters spend 15 whole minutes wandering through the woods. It’s like the writers didn’t have enough material to work with or just couldn’t think of anything for these people to do. The first half is spent sitting around, bickering, making out, and shooting the shit. It’s excusable. After all, it’s all set up. But that set up has to pay off and here, it simply doesn’t. Just when the film feels like it’s about to take flight, it peters out completely and never recovers.

There’s no large scale chase, no fight with the killer berserker, no chasing off the bear with sticks and stone. Just walking, tripping, bitching, walking, yelling, tripping, walking… The final five minutes of the film involves the grand reveal, the big moment when we finally find out who is possessed by the spirit of a Viking madman. Even this feels half thought out and lazy, raising far more questions about the underlying mythology of the film than it can even begin to answer. It’s an unsatisfying conclusion to an unsatisfying film, something I never thought I would say about a slasher movie in which a half naked, killer Viking takes on a gigantic brown bear in claw-to-claw combat.

Also, the poster for the film looks an awful lot like the poster for PINK FLOYD: THE WALL, doesn’t it? Kinda makes me wish they would have thrown in some musical numbers while they were at it.
Posted by David Grant at 10:18:00 PM
Email ThisBlogThis!Share to TwitterShare to FacebookShare to Pinterest
Labels: 1987, bear attack, Berserker, Horror, Jef Richard, Slasher film, The Nordic Curse