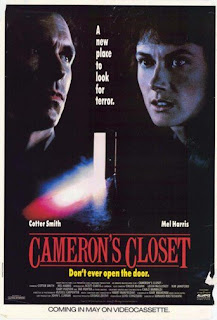 A precocious, telekinetic boy gives birth to a bloodthirsty monster in CAMERON’S CLOSET, a woefully under seen 1988 gem from director Armand Mastroianni. Cameron lives alone with his father, a research scientist eager to test the limits of his son’s remarkable telekinetic (and psychic) powers. Unfortunately for everyone involved, the various tests and training have given birth to a new ability, image projection. Simply put, if Cameron focuses strong enough, he can cause thought to take form.

Cameron’s latest creation, as it were, turns out to be a manifestation of some Mayan demon, a particularly nasty ghoulie that hides inside Cameron’s bedroom closet. The demonic rampage kicks off early with the demon decapitating Cameron’s father in a FINAL DESTINATION-esque, “easily written off by the cops as an accident” kind of way. The boy is shuttled off to live with his estranged mother and her asshole live-in boyfriend. Things don’t end well for this particular asshole. He’s flung through Cameron’s bedroom window one night. When the cops find him, they discover that his eyes have been burned out.

LAPD detective Sam and attractive psychologist Dr. Haley are both assigned to the case. Cameron bonds with both for easily understandable reasons. Dr. Haley is more motherly than his own biological mother and Sam actually treats the boy like a child, not a burden or a science experiment. But as the film goes along, more and more people turn up dead, and Sam has to face a particularly horrible truth, that the only solution to the blood bath is the 10 year old boy that accidentally started it, a child that is barely able to comprehend his own abilities. There is however an alternative solution, one that involves the unfortunate death of a child...

Watching CAMERON’S CLOSET today, I was struck by how familiar the film felt. In a lot of ways, it feels like a Greatest Hits package. There are more than a few similarities between this film and CHILD’S PLAY. The interplay between Cameron and his father reminded me a bit of Tina’s interactions with Dr. Crews, although far less antagonistic. The epic finale takes place in an alternate dimension that reminded me quite a bit of the Labyrinth from HELLBOUND: HELLRAISER II. All of these films, by the way, were released in 1988. So while it’s tempting to think that maybe Mastroianni and his writer, Gary Brandner, were just lifting scenes from other films, I find that somewhat difficult to believe. I guess there was just something in the water back in 1988.

The film also contains a few nods to POLTERGEIST and one major nod to A NIGHTMARE ON ELM STREET. At one point, Cameron comes under attack by “the Deceptor”, the evil psychic embodiment of Mayan maliciousness. The demon drags the child up his bedroom wall and across the ceiling, a feat I assume was accomplished using the same tricks Craven and Co. used for the death of Tina. Hell, the film even has it’s victim threatened by blades. In Tina’s case, it was the claws of Freddy Kruger. Here, Cameron is inches away from the spinning blades of his ceiling fan.

Aside from a cheap rubber masked monster, all of the effects in the film are really well done. Carlo Rambaldi’s imaginative moments help give the film a good bit of visual oomph. It’s a shame that the rest of the film looks incredibly cheap and flat, like it was a made for TV movie rather than a theatrical release. The climactic battle between Sam and a psychically projected zombie takes place in a foam rubber cave that is one fog machine away from being a Bert I. Gordon set. Most of the budget must have went to pulling off the spectacular death scenes and all the psychic shenanigans.
But cheap looks aside, CAMERON’S CLOSET really is a lot of fun. It takes itself pretty damn seriously, eschewing campy horror for a more grounded, personal approach. The characters are well drawn and likable, the drama has both stakes and a satisfying conclusion, and the scares are executed perfectly (although I doubt this movie is going to give anyone over the age of 10 nightmares). Were it not for the Harry Manfredini score, I would have no major complaints at all. I mean, let’s be honest. Manfredini has really only written one score in his entire life and that’s the score to FRIDAY THE 13TH. He’s been reprising that shit ever since.
Posted by David Grant at 11:48:00 PM
Email ThisBlogThis!Share to TwitterShare to FacebookShare to Pinterest
Labels: 1988, Armand Mastroianni, Cameron's Closet, Horror, psychic, supernatural