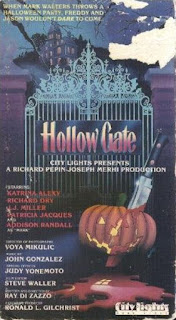 The trailer for Ray Di Zazzo’s 1988 slasher shit sandwich HOLLOW GATE namechecks HALLOWEEN right out of the gate. It’s clear that this was Di Zazzo’s attempt at matching Carpenter’s classic for shocks and thrills, even going so far as to give us a young child wearing a clown costume who grows up to be a murderer. That young child is Mark. The boy is celebrating Halloween with a bunch of his friends at a nice party his parents have thrown for him. Unfortunately, Mark’s dad is a bit of a dick and the party comes crashing down when little Mark proves useless at bobbing for apples. Enraged at his son’s pitiful chompers, the dad holds Mark’s head underwater, nearly drowning him before storming off.

Two years later, Mark harasses and attacks a pretty grocery store clerk, leading to his arrest, psychological evaluation and eventual release (for some reason, the girl didn’t press charges and the state doesn’t want to spend money on his incarceration). His parents long dead, Mark is handed over to his grandmother, an elderly lady who lives alone in a large estate known as Hollow Gate. Granny turns out to be more than a little naive, letting Mark out of his room one night. For her troubles, Mark rams a pair of scissors into her eye.

We then meet four idiots. There’s Al, the Lewis Skolnick lookalike, and his frumpy girlfriend Kim. Along for the ride are Billy, an asshole, and Mandy, Billy’s arm candy. “How does it feel to be alcohol legal?”, Billy asks his friends as they make their way to a Halloween party. This is meant to inform us that our quartet of 30-somethings are all celebrating their 21st birthdays (I think…). Our hip kids stop off in the middle of the day for some “submarine sandwiches” and “alcohol legal suds”. After scarfing down their grub, Kim excitedly points out that there’s a costume store across the street. If I were Kim, I would be far more excited to learn that they’ve driven straight into some time distortion field as the insert shot of the costume store was taken in the middle of the night while just 10 minutes ago it was barely afternoon in the restaurant.

Kim finds a gaudy purple wig that she really wants but can’t afford. The 'hilariously' stereotypical gay store manager offers the quartet a trade. He will give Kim the wig if they agree to deliver a few boxes of Halloween costumes to Hollow Gate. They agree and off they go to the slaughter, unaware that Mark placed that order himself as a trap.

As you can tell, HOLLOW GATE is absolutely front loaded with narrative. It takes 40 minutes for the group to run into Mark, which is approximately halfway through the film. With such a small cast, the remaining 30+ minutes feels like an eternity as Mark clumsily stalks and kills our band of idiots one by one. Lifting it’s central gimmick from FADE TO BLACK, Mark dons a different costume for each killing, starting with a Vietnam soldier (which gives him plenty of opportunities to talk about “the gooks”) before moving on to a lawman, an aristocrat, and finally a doctor. Not exactly the most creative costumes they could have chosen.

Wait. What I meant to say is that these final 30+ minutes are filled with nail biting suspense. Just try not to sweat as our characters spend whole scenes huddled in the bushes. Try not to hyperventilate as our characters spend five whole minutes running across an empty field one by one. I dare you not to look away as our characters rush to start the engine of a golf cart, a vehicle which would do fuck all to bolster their chances of survival as they know full and damn well that the entire estate is surrounded by a seven foot high, electrified fence.

I am of course being completely sarcastic. There is nothing tense or suspenseful about this film. Pound for pound, HOLLOW GATE is one of the dullest slasher films around. I can’t quite tell if the film was meant to be a straight forward horror film or some bit of campy horror humor. Certainly the filmmakers were trying to be funny when Mark unleashes a pair of 'ravenous' golden retrievers on our heroes, right? There has to be a reason why Di Zazzo allowed his leading man to deliver his lines at such a fevered pitch that he appears far more unstable than the killer, right? The fact that all our characters, including a pair of coppers, talk about “submarine sandwiches” as if they’re the pinnacle of world class cuisine or that a character stands still as a maniac driving a thresher inches ever closer to her in an otherwise empty field… I mean, this is all a joke, right?

Well, if it is, it ain’t funny. It sure as shit isn’t scary either. What it is is a borderline homophobic, slightly racist, and catatonically dull mess of a movie with a half hour of worthwhile material stretched out to damn near 80 minutes. Hardcore lovers of unintentional camp might be able to squeeze some enjoyment out of HOLLOW GATE, but everyone else should just keep on driving.

Oh, and that purple wig that gets everyone killed? Kim never even wears it. Bitch.
Posted by David Grant at 12:24:00 AM
Email ThisBlogThis!Share to TwitterShare to FacebookShare to Pinterest
Labels: 1988, City Lights Productions, Hollow Gate, Horror, Ray Di Zazzo, shot on video, slasher, Slasher film