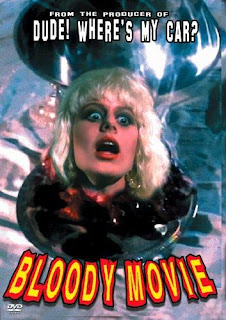 The warning bells began ringing right from the start. The first sound I heard was an upbeat, jazzy brass arrangement. Over an empty black screen, a 36 second long bit of old-timey voice-over narration told me all about glorious Hollywood and the promise of stardom. When the credits finally arrived, they were presented in the style of silent film intertitles and contained names like Alan Hale, Cameron Mitchell, Aldo Ray and Dan Haggerty. “Oh no”, I thought to myself, “this isn’t going to be a low budget attempt at a period piece, is it?”. Thankfully, the answer was no.

A montage of silent film footage and 1920s movie ephemera gives way to the modern day. Alan Hale shares a few words with a real estate agent. They are at the home of Lance Hayward, a 1920s matinee idol whose career was sunk by the arrival of the talkies. Hayward went missing shortly after that, abandoning fame and film for parts unknown. Many believed him to be dead, but as we’ll soon find out, Hayward is still very much alive and kicking. Hale wanders off camera, his paycheck earned for the day, leaving our real estate agent all alone. He winds up being drawn and quartered with his own car. When his partner, played by good old Grizzly Adams, arrives late, he’s quickly dispatched with a spear to the gut.

We then move on to our requisite gaggle of college aged nincompoops, including Final Girl Kathy and awkward film nerd Chip. Seeing as the old Hayward Estate is scheduled for destruction, our group decides to give it a proper send off. They sneak into the property, eventually running afoul of a muscle-bound biker and his floozy girlfriend. Arguments erupt and fists are thrown. But they all have something much more important to worry about. Hayward is bumping them off one by one, the manner of execution changing with each vintage costume he puts on.

Nick Marino’s BLOODY MOVIE (a title so generic that I’m shocked it had not been used a dozen times by 1987) sounds like a comedy, doesn’t it? Like some giggle worthy rip off Vernon Zimmerman’s 1980 slasher FADE TO BLACK, another film about a serial murderer whose methods change depending on which Golden Age of Hollywood character he’s currently dressed up as. I mean, a movie featuring a killer in his 90s would be played for laughs, right? Well, no, BLOODY MOVIE isn’t a comedic film, at least not intentionally.

Or maybe we’re just not meant to think at all as the film goes along. It’s certainly easy not to as Marino and Co. keep the deaths coming at a steady pace. While cheap, some of the effects work is rather good, especially the aforementioned bisection via car and a gnarly, mid-film decapitation. The presence of ex-porn actresses Michelle Bauer and Jamie Summers ensures the requisite nudity, and overall, the cast performs as well as you could expect with Z-grade material. If you just switch your brain off, you might actually be able to get through BLOODY MOVIE without punching yourself in the face.

Unfortunately for yours truly, I simply couldn’t get into the groove with this film, largely because of some horrible directing and editing choices. Each murder is preceded by a clip show from various silent movies (used here in such a manner that I’m surprised Marino and Co. weren’t sued into oblivion) and ridiculous montages of movie posters and stills. I get it. It’s a gag, not much different from the Gore Gong and Hooter Honk gags in CEMETERY HIGH, but dude… It seriously kills the pacing here. Not only do we get these montages before the start of the set piece, we return to them during the set piece. It kills the momentum and it strangles every ounce of possible tension out of these scenes. Why not just show the characters wandering through the Hayward Estate, stopping to look at a series of movie posters? Look, here Hayward played a pirate. Here he played an archer. Here he played a warrior. Audiences would connect those dots. But no, time and time again, Marino kills the pacing of his own film for the sake of boring montage.

But it's the final 20 minutes that really sink the ship. Instead of playing it straight with their audience, Marino and his writing team decide to go full-on supernatural, ditching the already weak motive for the killings (which boiled down to “they didn’t like my voice”) for an even more ridiculous motive. Turns out, Hayward is a Satanist striving for immortality, lashing out at the world because… well… they didn’t let him play Othello or some shit. I’m not really sure. All I know is watching a slasher movie villain (in light black face, no less!) manhandle the Final Girl while poorly performing Shakespeare is really not a satisfying or thematically appropriate conclusion.

In summary, BLOODY MOVIE is definitely a bloody movie. Michelle Bauer takes her clothes off, we learn a valuable lesson or two about film stock and the advent of sound, get to spend three whole minutes with the great Cameron Mitchell, and the entire shebang ends with someone being aggressively kissed to death. Viva la Cinema.
Posted by David Grant at 8:13:00 PM
Email ThisBlogThis!Share to TwitterShare to FacebookShare to Pinterest
Labels: 1987, Bloody Movie, Horror, Michelle Bauer, Nick Marino, slasher, Terror Night