DON'T LOOK IN THE ATTIC 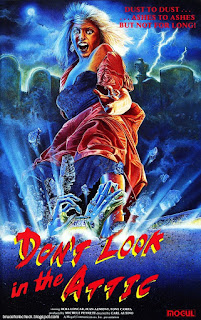 “Don’t look in the attic” is the first bit of advice I would give to anyone visiting my home. For starters, to reach the attic one must traverse a narrow staircase lined with old monitors, stereo equipment and various bits of bric-a-brac. Once you reach the attic room, you’re greeted by garbage bags full of old clothes, boxes upon boxes of toy accessories from god knows how long ago, stacks of action figures still in boxes, and a whole assortment of other junk I should just get rid of. I’m not a hoarder, by the way. I’m just exceptionally lazy.

Of course, DON’T LOOK IN THE ATTIC is not the original title of this film. It’s an Italian production, directed in 1982 by low-rent genre regular Carlo Ausino. The original title was LA VILLA DELLE ANIME MALEDETTE, or THE VILLA OF THE CURSED SOULS, a far more appropriate moniker. The film was unceremoniously dumped on video here in the States with the title of DON’T LOOK IN THE ATTIC in an attempt to tie the film into the semi-popular series of unrelated “Don’t” films that forbade us from ever going near the park, going in the house, going in the woods alone or even looking in the basement. Good thing I was still allowed to go to the bathroom and to FuncoLand otherwise I would have had a rather miserable childhood.

This Italian turd begins in Turin, 1955. We arrive in the middle of a domestic quarrel of sorts. Two men scuffle about while a hysterical woman tries to get them to calm down. One man stabs another to death. In a moment of shell shocked horror, the woman then retrieves the knife and offs the other man. She then retreats to the family cemetery where she is inexplicably dragged into the ground by a demonic hand. Many years later, we meet the woman’s daughter, Elisa, as she attends a séance. Elisa hears her dead mother’s voice warning her, endlessly droning “don’t go to the villa… don’t go to the villa”.

By the way, that really should have been the US video release title of the damn movie. You guessed it. We never once look in an attic.

A little later, Elisa and her two cousins, Bruno and Tony, are called to a lawyer’s office. They are told that they have inherited the cursed family villa. They are not to sell the place, nor are they to evict the creepy live-in custodian. Despite being again warned by her mother’s ghostly voice, Elisa immediately moves into the villa. Bruno brings along his wife. As the film progresses, Elisa becomes more and more aware of a certain evil that lurks in the hallways of the home. But she has something else to worry about, something a tad bit more perverse...

Despite their close relations, both Bruno and Tony have taken an interest in their virginal cousin. Bruno desperately wants a male heir, but his wife is unable to have children (or so he thinks; it’s really Bruno that is sterile, a fact his wife is hiding from him). When Bruno’s wife meets an unfortunate end, run down by a car in the most hilarious slow motion scene of vehicular manslaughter ever captured on film, Bruno’s interests turns even more sinister, culminating in an attempted rape. While all of this is going on, the lawyer is investigating the circumstances of the wife’s death (even though it’s extremely cut and dry) with the help of his ex-lover-turned-secretary, and Elisa discovers that she is part of the seventh generation of cursed family members destined to die in the rundown villa.

And just what is this family curse, you ask? I have no idea. The film never gets into specifics. In fact, the film doesn’t seem all that concerned with any one strand of plot here, which is a shame as the twisted family dynamics on display could have resulted in a queasy, sleazy brew of nasty exploitation goodness. But despite its noncommittal attitude to narrative consistency, DON’T LOOK IN THE ATTIC desperately wants to be a horror movie, as evidenced by all the roaming camera work and incessant haunted house music. Fog wafts through a crack in Elisa’s bathroom door. Her bed sheets move on their own. Someone shines flashlights through obvious black construction paper in an attempt to simulate demonic eyes watching Elisa in the dark. It’s all painful stuff to watch, delivered with little flair or directorial conviction.

The fact that nothing quite makes sense is the least of the concerns here. The film is too poorly paced to hold attention and every attempt at drama is sabotaged by some truly awful dubbing. Perhaps watching the film in Italian would help correct the latter, but the former just cannot be overcome. I was bored through much of the film, uninterested even in the more giallo-like elements at play in the narrative. Someone is skulking around the villa. That mysterious someone stabs a main character to death. There’s a bit of murder mystery giallo iconography tossed in, including a last minute arrival by a character chock full of exposition. But it’s all for naught. The exposition makes no sense. The identity of the true culprit is so out of the blue that it’s likely to result in more chuckles than gasps. It’s poorly thought out, just like the rest of the film.

DON’T LOOK IN THE ATTIC was made in 1982, yet it feels like a throwback to the dime store Italian Gothics of the 60s. The 1980s was an era of Italian genre film that reveled in explosive violence, graphic grue and dynamic visuals. Ausino’s film feels like a relic in comparison, too workaday, too padded out with spook show moments, too lacking in any real intensity, completely without the balls to follow through on its incestuous indulgences. DON’T LOOK IN THE ATTIC could have been an exploitation film for the ages, a gonzo kitchen sink nightmare loaded with taboo sex and violence. But it isn’t, not even a little bit. It’s a sleep aid disguised as a horror movie.
Posted by David Grant at 12:53:00 PM
Email ThisBlogThis!Share to TwitterShare to FacebookShare to Pinterest
Labels: 1982, Beba Loncar, Carlo Ausino, Don't Look in the Attic, ghost, Horror, Italy, La villa delle anime maledette